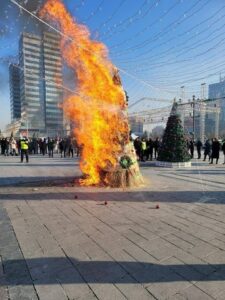 On November 5, protesters stormed the Government Palace in the capital of Mongolia Ulaanbaatar. Riots broke out in  amid the loss of about $12 billion worth of coal that was supposed to be exported to China.

Several thousand protesters took to the streets after local media reported that the amount of coal exported from Mongolia differs from the amount received by the Chinese side. Corrupt officials are reportedly to blame for the loss of 6.5 million tons of coal.

The protesters demand from the government and the president to name the officials responsible for the crime. The protests continue for the third day. The situation is heating up and threatens to escalate into clashes with the security forces.

According to the Minister of Justice of Mongolia, the government of Mongolia asked the Chinese authorities to join the investigation of the coal case.

According to the report by CentralAsia, the Chinese side executed officials involved in the theft of coal from Mongolia.

Mongolia sends about 86% of its exports to China, more than half of this volume is coal.

Could this be another color revolution?

Yea but China is Lowkey fucked, all that shit China is doing USA will do soon. Soon we’ll all be in detention camps

Unless you count Mongolia possibly turning red as a color revolution, then no.

How can such a thing happen? China executed some officials……who? So Mongolia sold it to Western Investment bankers with a demand of freedom, a bungalow near the beach and a JP Morgan bank account with stolen money. Incredible everybody is still jumping on that train.

WOW, the Chinese executed the officials involved on their side! Way to go! That is what is needed in the USA for corrupt government officials. But I don’t see that happening as the entire system is rotten to the core. More likely the innocent will be blamed and executed

Mongolia really needs one or two nuclear reactors, Russians could build it for them in exchange for joining a more close relationship in foreign policies.