Dozens of protesters clashed with officials after attempting to march on a police station which was seized by armed men in the Armenian capital. 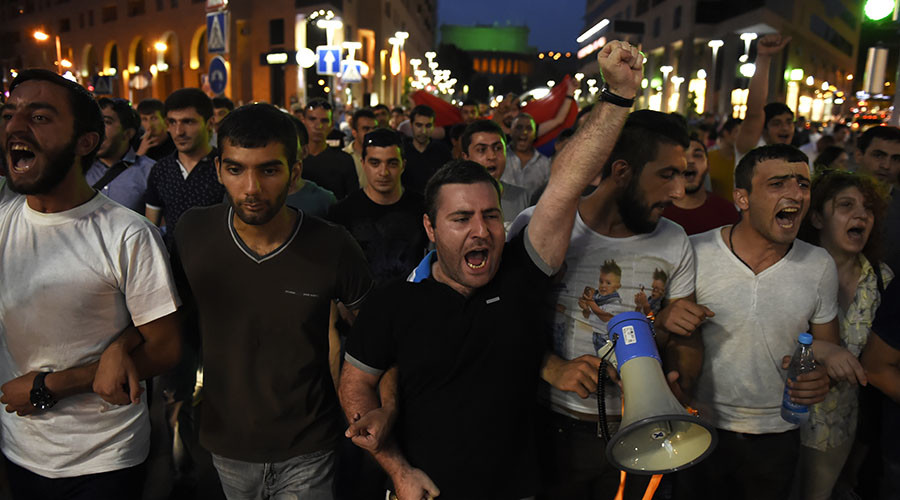 According to Interfax, some 100 people gathered in central Yerevan on Monday. They have taken the streets over the weekend attempting to march on a police station. After failing to comply with the warnings not to proceed with the march, clashed between officials and the protesters occurred.

The protesters were led by opposition activist David Sanasaryan who has been encouraging Yerevan citizens to take to the streets in an anti-government protest, TASS reports.

“I am against armed struggle, but a good deed has been launched, so let’s join them,” Sanasaryan reportedly said, calling on protesters to march towards the seized police station.

Ashot Karapetyan, the head of Yerevan’s police force, was at the scene of the event, trying to inform the protesters that what they are doing is unlawful and that they don’t have the right to proceed with the march. Unan Pogosyan, Armenia’s deputy police chief, addressed the gathering, saying that a confrontation is being ‘’provoked’’ in Yerevan, and called on people not to ‘’exacerbate the situation’’.

These callings on protesters resulted in their attempt of breaking through police cordons after which clashed followed. So far, there isn’t any information of casualties.

The protesters remain on the central square on Yerevan. Authorities assure them that no special operations against the ones who have occupied the police station have been planned so far. The negotiations continue.

U.S. Department of State Deputy Spokesman Mark Toner said at a briefing in Washington D.C. that the United States strongly condemns the use of violence to effect political change in Armenia. He offered condolences to the police officer killed in the attack on the police building and said Washington encourages Armenian authorities to handle the situation with appropriate restraint.

‘The US authorities are convinced that any use of violence for solution of political problems is always a bad idea,’ he said. Indeed, this clearly contradicts with the way they operated in Ukraine and any other countries.

According to the information recieved by SouthFront, the storm of the clashes is expected today.

The hostage takers’ main demand is to free Jirair Sefilian, an opposition leader whom the authorities have accused of plotting civil unrest. Sefilian was jailed in June over allegations of illegally possessing weapons.

Negotiations were launched to persuade the hostage takers to lay down their weapons. Two hostages were freed Sunday overnight, the National Security Service said in a statement, adding that the armed group is refusing to let other hostages go, with high-ranking police officers among them. The armed men are right radicals, allegedly linked with the US Armenian diaspora. Moreover, these men have a heavy anti-Russian stance.

“The terrorists who committed several crimes and have a large number of weapons and ammunition, pose a danger not only for the hostages, but for the society just as well,” the National Security Service warned in a statement.