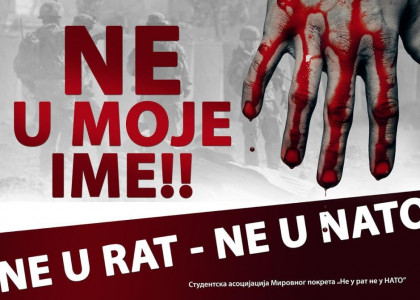 Peace movement „no to war – no to NATO“ has announced protest on Wednesday, 14th October in 17 hours due to the Jens Stoltenberg’s visit to Montenegro’s state leadership.

As it was stated in the notification, goal of this protest is resisting NATO membership of Montenegro.  Protest will take place in Belgrade street, near the intersection with the Risto Stijović street. The leader of the protest will be president of Peace movement, Gojko Raičević.

At the same time, Raičević sent an invitation to political parties, that are for organising a referendum about NATO membership, to join the peace protest because of the discontent of the Government regarding the eventual NATO membership, against which is a large number of citizens.

“Our intention is to point out the need for referendum regarding this issue, to point out arguments for and against the membership, because that is the democratic way of making decisions”, said Raičević in a letter sent to Democratic front, Socialist people’s party, Demos, Democrats and independent ministers.

“Respecting the values of these subjects and tendency to establish democratic standards in making political decisions, particularly decisions in foreign policy, such is the NATO integration of Montenegro, we hope that we will be supported and that a substantial contribution in realization of peace protest next Wednesday will be given”, head of the Peace movement said.

Invitation is sent to political organisations mentioned above, with the request to evaluate the importance of this historical moment and to overcome mutual disagreements, to show commitment to justice and truth, through request to have a fair and democratic referendum about (not) joining NATO alliance.