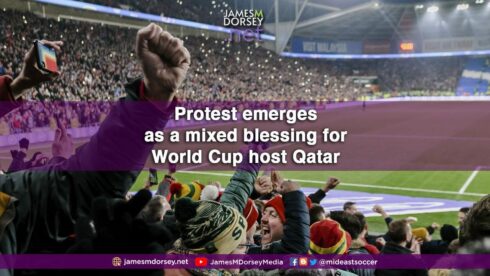 Protest on the soccer pitch has proven to be a mixed blessing for World Cup host Qatar, exposing double standards in the Gulf state’s position as well as that of its critics.

Qatar embraced protest when it supported Qatari policies, such as the Gulf state’s increasingly assertive denunciation of double standards in Western criticism of discrimination against LGBT people or its refusal to establish diplomatic relations with Israel in the absence of a resolution of the Israeli-Palestinian conflict.

However, protesters and foreign media quickly encountered the limits of Qatari tolerance and notions of freedom of expression when they touched on politically sensitive issues, ranging from support for LGBT rights to solidarity with demonstrators in Iran, who have defied a brutal crackdown by security forces in more than two months of anti-government manifestations.

As a result, the debate on double standards at times amounted to the kettle calling the pot black.

That is not to question the legitimacy of criticism levelled by Qatar and its critics at each other. However, it is to note that both parties’ credibility is in question because of their inconsistencies and failures to put their own houses in order.

“On one level, the World Cup is unfolding smoothly. On another, we go from crisis to crisis,” said a journalist covering the tournament for a major Western news organisation.

Photographers were often on the frontline as Qatari authorities stopped them from snapping pictures of security forces preventing fans from wearing clothing to matches or taking into stadiums paraphernalia that signalled support for Iranian protesters or LGBT rights.

‘The real test case will be when the United States plays Iran. That could be the crescendo in the clash over what protesters and media can and cannot do,” said another journalist.

The November 29 match is likely the World Cup’s most politically charged game, with talks to revive the 2015 international agreement that curbed the Islamic republic’s nuclear programme all but dead and Iraq-mediated negotiations with archrival Saudi Arabia suspended.

The US Soccer Federation joined the fray with Iran ahead of the two nations’ World Cup match when it briefly displayed Iran’s national flag on social media without the emblem of the Islamic Republic, saying the move was in support of protesters in Iran.

Iran accused the federation of removing the name of God from their national flag and said it would complain to FIFA. However, US Soccer later restored the Islamic republic’s flag on social media.

During the game, Qataris displayed pictures of former German national team player Mesut Özil, a German-born descendant of Turkish immigrants, while covering their mouths in protest against German double standards.

Mr. Özil quit the German team after becoming a target of racist abuse and a scapegoat for Germany’s early World Cup exit in 2018.

The Qatari demonstration was in response to Germany’s team covering their mouths at a group photo in advance of an earlier match against Japan in protest against FIFA president Gianni Infantino’s banning players from wearing One Love bands during games.

In the same vein, prominent Qataris wore pro-Palestinian armbands to the Germany Japan match to counter the pro-LGBT One Love band sported by German Interior Minister Nancy Faeser during the game.

Qatar’s emir, Sheikh Tamim bin Hamad Al Thani, signalled the Gulf state’s greater assertiveness in countering criticism when he lamented some three weeks before the kickoff of the World Cup that Qatar had been “subjected to an unprecedented campaign,” scrutiny, and scorn “that no host country has faced.”

In an indication that human rights, labour, and LGBT groups may be losing leverage, the emir said that “we initially dealt with the matter in good faith, and even considered some of criticism as positive and useful… (But) it soon became clear that the campaign tends to continue and expand to include fabrications and double standards that were so ferocious that it has unfortunately prompted many people to question real reasons and motives behind this campaign.”

The critics’ problem is their past failure to tackle with equal ferocity issues of human rights, prejudice, and bigotry in the run-up to the 2018 Russian World Cup, as well as to separate the wheat from the chafe by distancing themselves from criticism of Qatar that was laced with bias and racism.

In doing so, critics are as much their own worst enemy as they have been drivers of social change in Qatar.

By allowing Qatar to deflect criticism by calling into question critics’ credibility, activists have enabled the Gulf state to take its counteroffensive to the next level.

A week into the World Cup, Qatar was reviewing, according to the Financial Times, its substantial investments in London after the city’s transport authority suspended advertising from the Gulf state because of the controversies over worker and LGBT rights.

“Countries like…Qatar…view their investments as strategic bribes to mute criticism and resist reforms,” said Radha Stirling, a London-based lawyer who represents expatriates in the Gulf who run into legal difficult

To be fair, Qatar was one of 11 countries in the Middle East, Africa, and South Asia that were banned in 2019 from advertising by Transport for London on the grounds of human rights violations. Nevertheless, the agency allowed some Qatari advertising promoting the Gulf state as a tourist destination until last week’s World Cup kickoff, when it decided to implement the ban fully.

Even so, the list reinforced the notion of double standards by failing to include China at the height of its brutal crackdown on Turkic Muslims in the northwestern province of Xinjiang; Russia that was annexing Ukrainian territory, repressing LGBT people, and attempting to assassinate its critics at home and abroad; and Israel with its increasingly racial policies towards Palestinians.

Qatar is likely to be the first of numerous rights-focussed Middle Eastern battlegrounds, with countries like Qatar, Saudi Arabia, and Egypt hosting or preparing bids to host multiple major sporting events, including Asian Cup competitions, the 2030 World Cup, and the 2036 Summer Olympics.

The bids constitute a rich and legitimate hunting ground for human, worker, and LBGT rights activists. However, their effectiveness will, to a significant extent, depend on their ability to put their own house in order.

Thank you to all who have demonstrated their appreciation for my column by becoming paid subscribers. This allows me to ensure that it continues to have maximum impact. Maintaining free distributions means that news website, blogs, and newsletters across the globe can republish it. I launched my column, The Turbulent World of Middle East Soccer, 12 years ago. To borrow a phrase from an early proprietor of The Observer, it offers readers, listeners, and viewers ‘the scoop of interpretation.’ If you are able and willing to support the column, please become a paid subscriber by clicking on Substack on the subscription button and choosing one of the subscription options.

Dr. James M. Dorsey is an award-winning journalist and scholar, an Adjunct Senior Fellow at Nanyang Technological University’s S. Rajaratnam School of International Studies, and the author of the syndicated column and blog, The Turbulent World of Middle East Soccer.

Why am I reading LGBT libtard nonsense on Southfront? Too much globalist anti-China, anti-Russia and anti-Iran bias in this article.

I agree with you, Redguard.

Don’t know what this paid apologist simp is posting on behalf of Qatar when Qatar hosts the largest US military base at Al-Udeid? All the Israeli’s are already in that base no?…….Stupid muzlim Al-Qaeda appeasing James Dorsey? Only a stupid bastard from the PGCC or Turkey/ Baqistan would fall for this rubbish.