Thousands of people gathered in the capitals of the UK and Spain to protest against the possible intervention of their countries in Syrian conflict. 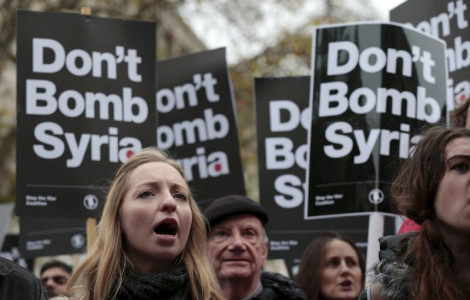 Demonstrators chant at a rally against taking military action against Islamic State in Syria, held outside Downing Street in London, November 28, 2015.

Yesterday about 5000 people gathered in central London to protest against possible British involvement in the airstrikes carried out in terrorist-seized territories in Syria.

A Stop the War Coalition member said during the protest that “David Cameron’s incoherent proposals for action in Syria will do nothing to weaken ISIL but will instead inflame the civil war, deepen the misery of the Syrian people and increase the terrorist risk”.

On Thursday, UK Prime Minister David Cameron explained his plans for British warplanes, already bombing ISIL objectives in Iraq, to join France and the US in the offensive held in Syria.

Next week the Parliament will vote on the subject. It’s expected that a large number of politicians hesitant to commence Syria attacks could change their minds over the recent series of terrorist attacks carried out in Paris more than two weeks ago.

Also in Madrid a similar number of protesters gathered outside the Reina Sofía Museum to complain for the Spanish government possible intervention in the conflict. In response to the manifestation, Mariano Rajoy, Prime Minister of Spain said that there’s no a resolution about the matter yet, but didn’t discard the continuity of talks with its allies on the subject.