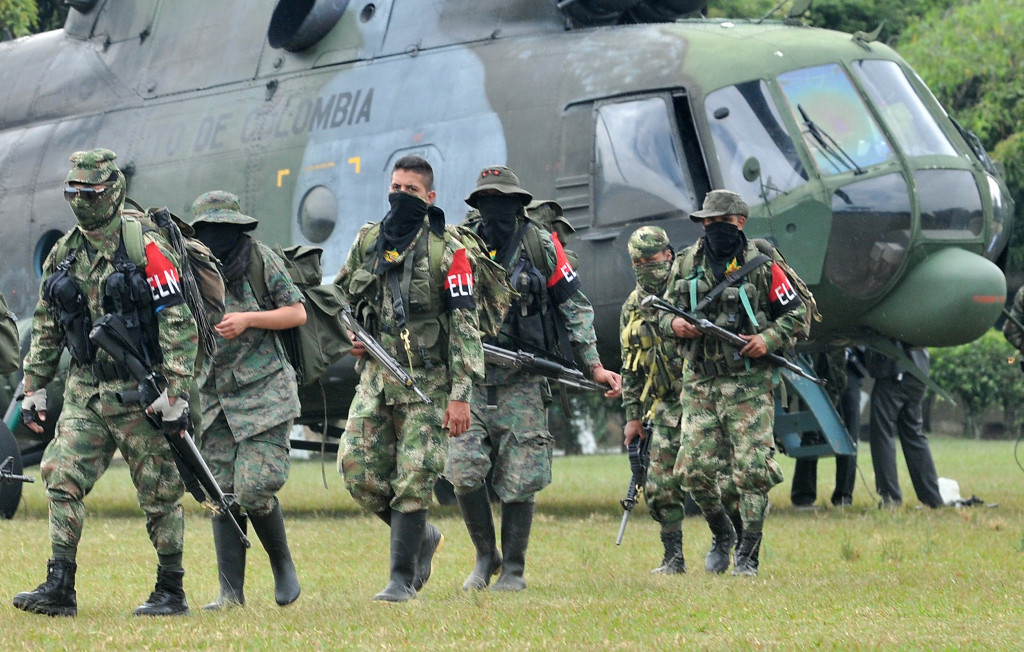 Yesterday (Wednesday, 30 March 2016) delegates of the government of President Juan Manuel Santos and the second largest guerrilla group in Colombia, the Ejército de Liberación Nacional (National Liberation Army, ELN), arrived in Venezuela to announce the formal commencement of negotiations to reach a peace agreement between the two combatants. The announcement comes over three years after the announcement of similar negotiations with the largest guerrilla group in Colombia, the Fuerzas Armadas Revolucionarias de Colombia – Ejército del Pueblo (Revolutionary Armed Forces of Colombia – Army of the People, FARC-EP).

Although the negotiations with the FARC failed to reach a final agreement by the date that had been set by both parties as a deadline for negotiations (23 March 2016) they remain committed to continuing negotiations to resolve outstanding issues and advance the implementation of existing agreements where possible (for example, a joint de-mining project has already commenced in which both sides are participating in a highly symbolic and also crucially practically important measure if peace is to be achieved and take effect).

The negotiations will be based on an agenda consisting of six main points: the participation of Colombian society in the construction of peace; strengthening democratic institutions for peace; transformations for peace; justice and integral reparations for victims; establishing the security conditions necessary to end the armed conflict in the country and provide the basis for a durable peace, including guaranteeing the safety and free exercise of political activities by the members of the ELN once they disarm; and implementation.

The announcement may provide a significant boost to public support both for the existing peace process with the FARC as well as for President Santos personally who has suffered a dramatic decline in support amongst the people of Colombia since his reelection in 2014. While there are many reasons for Santos´ falling popularity, in particular the deteriorating economic conditions in the country (which have also taken a heavy toll on the popularity of other sitting governments around the continent irrespective of their ideological positions and practical political programs), the slow pace of the negotiations with the FARC and the many remaining outstanding questions and doubts surrounding the viability of a durable peace in Colombia undoubtedly contributed to the decline.

The 2014 election was widely interpreted as being above all a preliminary referendum over President Santos´ decision to commence negotiations with the FARC – his competitor in the run-off election, Oscar Ivan Zuluaga, had been a vehement critic of the peace process and was committed to the physical extermination of any guerrillas that didn´t unconditionally surrender. Zuluaga was closely allied with former president and now senator in the national Congress Álvaro Uribe, to the extent that many considered Zuluaga to be Uribe´s protégé and that Uribe would exercise a large amount of influence if not effective control over a government headed by Zuluaga (Uribe had aggressively pursued a policy of total war against the guerrilla groups for eight years while paradoxically negotiating a generous peace agreement with the para-military groups providing for their disarmament and re-integration into society).

While the challenges and difficulties facing the peace process are enormous, the formal announcement of the commencement of negotiations with the ELN provides a significant boost to the efforts to reach a durable peace in Colombia. There are still many pieces missing from the puzzle: one is the future of the neo-paramilitary groups, largely made up of former members of the paramilitary groups and engaged in basically the same criminal activities (including the assassination of leftist and other civil society leaders and representatives on a large scale). Two of the larger groups have however recently announced their willingness to enter into negotiations for their disarmament and reintegration into society (“La Oficina de Envigado” based in Medellin and “los Urabeños”, who have a significant presence in many parts of the country); if such negotiations can be realized, and some of the other major neo-paramilitary groups are similarly inclined, the prospects for peace would increase enormously.

Another key obstacle to the peace process is the vehement resistance of powerful elements within the Establishment, particularly the far right political parties and groups now centred around the figure of former president Álvaro Uribe who can count on the support of some (perhaps many) senior and mid-level military and intelligence officials as well as powerful businessmen and landlords throughout the country (and outside the country), all of whom have benefited enormously from the social and armed conflicts that have ravaged Colombia for over fifty years. These groups enjoy the support of a significant part of Colombian society (varying between approximately 30-50% of the voting population at any given time) and it remains an open question as to the lengths they would go to in order to prevent the outbreak of peace.