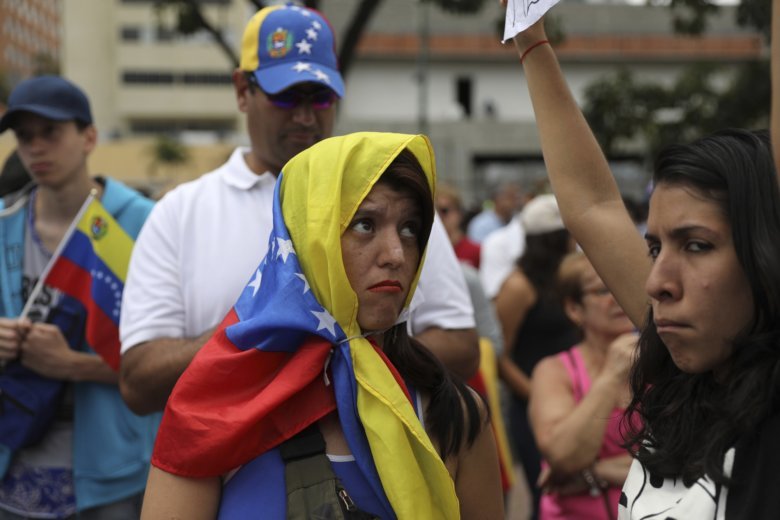 Saab stressed that court should start an investigation following the recent series of protests and the appearence of self-declared interim president in the country and the blocking of Venezuelan assets abroad.

Guaidó heads the National Assembly and as a lawmaker has immunity from criminal investigation which can only be removed by a high court.

The announcement by the Prosecutor General marked the first significant move by the government of president Nicolás Maduro to react to illegal actions of the Guiadó-led opposition, who, with the US support, declared himself Venezuela’s rightful interim president.

Here is a guy who has turned to Venezuela’s enemies, trying to steal your oil and destroy your country. Should we, like, maybe investigate him? It’s an interesting question; by all means take your time.

If Maduro’s position was so strong and he was so sure in what he was doing that would be done deal… long time ago So I wouldn’t be getting over excited with those journalistic reports All this resembles more on two enemies positioning themselves, watching each and getting ready before they jump and grab each others throats and or knock the head off to their opponent. Than anything else. It is more tactics that consider consequence of every move than starting of big fight. We are only at the beginning.

I think it is not so easy. Maduro is in the middle of a special operation guided by the USA. Here some quotes from the TC 18-01 unconventional warfare US army manual. Maybe you will make some parallels with the situation in-there.

A group committing random political violence is not an insurgency. In an insurgency, the group is committing directed and focused political violence. It requires leadership to provide vision, direction, guidance, coordination, and organizational coherence. The insurgency leaders must make their cause known to the people and gain popular support. Their key tasks are to break the ties between the people and the government and to establish credibility for their movement. The leaders must replace the government’s legitimacy with that of their own. Their ability to serve as a catalyst that motivates and inspires others to have faith in their cause is vital to the movement’s growth.

Operational objectives address how the insurgency will progress towards its strategic goal. Examples could include the following: – Attaining a level of popular support in a key region. – Gaining international recognition or external support.

Historically, insurgencies do not succeed without some form of external support. This support can be in the form of: – Moral or political support in the international forum. – Resources, such as money, weapons, food, advisors, and training. – Sanctuary, such as secure training sites, operational bases over a border, or protection from extradition.

The resistance organization uses a variety of subversive techniques to prepare the population psychologically to resist. Some techniques include propaganda, demonstrations, boycotts, and sabotage. Subversive activities frequently occur in an organized pattern without any major outbreak of armed violence. Activities include the following: – Recruit, organize, and train cadre. – Infiltrate key government organizations and civilian groups. – Establish cellular intelligence, operational, and support networks. – Organize or develop cooperative relationships with legitimate political action groups, youth groups, trade unions, and other front organizations. This approach develops popular support for later political and military activities. – Solicit and obtain funds. – Develop sources for external support. …. The goal is to prepare or transition the population into accepting overt military operations (guerrilla warfare) as permissible. The goal is to gain the support of the local population and weaken the power of the existing government.

I am NOT going to read that. If you had anything to say based on article or US “manual” than you should have used your interpretation of the article or that “manual” to develop argument and not to COPY & PASTE whole parts “manual” here. Wasn’t it simpler to send link than to copy paste somebodies “manual” if you don’t feel like writing your own thoughts? Instead you are patronizing (like you wrote manual) and like everything depends on US who are not even there (at least not officially)

What kind of dialogue is this ?! And what kind of forum would that be if people would COPY & PASTE other peoples “manual” and opinion”s instead of making point or developing argument on their own?!

If you have said something interesting and link the “manual” as source I might have been intrigued….

But like this I can’t be bothered to read.

No you pardon me, please. If I don’t like comment I should avoid to answer it. Not to get in dispute. I am maybe sometimes too jumpy because some people here go way over the limits. Thus I generalize and get wrong impression that people deliberately do things for provocations. So I over-react unfortunately.

Yes, this is part of the equation: Maduro is weak in a rough world where weakness is an unaffordable luxury. But the shadow-boxing you refer to is between Maduro and Guaido, in Caracas. The outside enemy is moving swiftly and with purpose, and this enemy controls the international financial system, most of the media that matter, and oh a terrible, devastating firepower. You are under attack by a superpower, and you better rise to the occasion pronto.

We don’t tend to talk about them in this way, but at the hour of truth both Uncle Saddam and Gadhaffi turned out to be too soft for the real world, unable to conceive that the Dark Throne would just go for it and bulldoze over their country. You want to share their fate?

“shadow-boxing” is between Trump and Maduro and Guaido is just U.S. instrument to which US tries to give more importance … For now…Guaido is just new U.S .puppet till yesterday totally unknown and self elected…. His importance shouldn’t be overestimated either. He is very easily replaceable by the West with some other puppet if need be. They should put the puppet in the house arrest and try to arrest every known member opposition specially in police and in the army and put them in prison

“Little Kim got them to back off” with his ballistic missiles (reaching also Japan, US military bases and US mainland) and HUGE artillery firepower that would make millions of South Koreans dead in matter of DAYS. Maduro doesn’t have that kind of fire power and he can’t represent such threat to important US allay as N Korea does.

“‘Shoot this Guaido traitor” Above all not to “shoot” that insignificant idiot Guaido there are many other Guaido’s waiting to replace him! That would only give perfect excuse to US hawks…for military intervention and plenty of “ammunition” for Western MSM propaganda to DEMONIZE Maduro

“surround enemy embassies with tanks and radio jammers” :-)) Why the hell would they do such thing?!? They simply need to send them back home if belonging to hostile countries. Venezuela need those tanks to protect strategic cross roads, bridges, frontier, air ports etc…

“maybe take some hostages” Why?!? Maduro is not dictator and Venezuela is normal country…(despite certain deficiencies) Why would they start to act like they are criminals, like they are U.S. (kidnapping and torturing people)?!?

Saddam and Gadhaffi did the mistakes that costed them lives. And it was not their “softness” that killed them but their NATIVITY ! Sadam was brought into the trap to attack Quvait and give excuse to U.S. to destroy Iraq. Gaddafi made mistake by prematurely wanting to reject dollar (golden dinar) and make Libya independent from US world banking system and help other African countries in that process. His naivety was that France if bribed enough will protect him from U.S.

US will go down the toilet as “super power” and soon (one way or another) The less people around the world get killed in that process the better !!

You mean people like China? The interim president is the people last hope to ward of starvation, economic crisis and possibly civil war.

Go ahead sovereign Venezuela prosecute the young boy.Big thinks are for big people small things and chaose are for young uncontrollable people like Guida and Macroni of France.

So the question is is the court bribed against Maduro because Juan Guido Bandido belongs hanging from a lamp post for his betrayal against the Venezuelan people. W A CIA ASSET..Why has nothing been done about this asshat?? Are the majority of Venezuelans aware of what HELL Juan Guido Bandido will do to them and their country? See Syria 2.0

You fucking idiot! Chavez and Maduro already ruined Venezuela’s economy! Asshole Maduro was never intended to replace Chavez while he recuperated from an illness. Chavez mysteriously croaked with the idiot bus driver taking his place. Chavez fucked up Venezuela’s economy by seizing international companies and putting his shit-for-brains cronies in charge of those. Maduro went one step further and threw out those assholes so he could appoint crooked military generals in charge of those who fucked things up even worse. Nobody in Venezuela pays attention to Maduro.

The US can careless about the people of Venezuela. All the Empire of Chaos want is the oil and the other minerals resources of Venezuela. Especially now that the empire is morally and financially bankrupt. You should stop watching CNN (fake news) and FOXhole News propaganda machine run by the CIA. Stop drinking the kool-aide. Americans are bombarded by propaganda approved by the CIA (Number one criminal organization of the world). The only solution they see to fix the problem is another war.

USA-UK are ryuining Venezuela economy. Venezuela is the only country in latinoamerica which has an economical grow of 4.5, and this is an international information. Your opinion is only your opinion without any basis or evidences.

Investigation? How about arrest an execution for treason?

Before the lawyers are finished with the preparatory paperwork, its over. Venezuela is gone. Viva Volta Batista, as Putas e dos Casinos.

This self proclaimed interim President is but a premature ejaculation by the CIA. He will get nowhere, and flee into exile if he is lucky.

The Bolivar Revolution will continue. Russia and China are great allies of Maduro and Venezuela.

That what the fight is about. Its a proxy battle between China and the U.S. Russia and China are serious about keeping Venezuela stabilized. Venezuela is to play a key role in China’s gargantuan global OBR Silk Roads.

We can expect more proxy wars as China /Russia battle it out with the U.S.

A shameless traitor,doesn’t deserve any respect.He should be put on trial and expose to the world how his zionist masters organised the farce of his declaration of president and the goal of stealing Venezuelas Oil.Russia,China, Iran etc,should support Venezuela 100%with food,arms and whatever it takes to put these satanic zionist scumbags in total humiliating defeat.

I think china, russia, turkey and iran have expressed support for maduro and told the destitute states of morons to keep their fingers away. eu demand a new election or or .. as usual bland and toeing the line the destitute states set out recently (it’s difficult to go against the democratic basic rules without undermining the validity of those rules everywhere, and that is a dilemma)

Once the United States gives “President” Guido Venezuela’s stolen assets, he could be tried for receiving stolen property as declared by the US government. One could not ask for a better usurperer than Guaido Bandido or Guido Bandido.

México must pay attention USA-Europe to what they are doing with Venezuela since Chavez president. USA do not want a left government close to its south door, that is for sure.