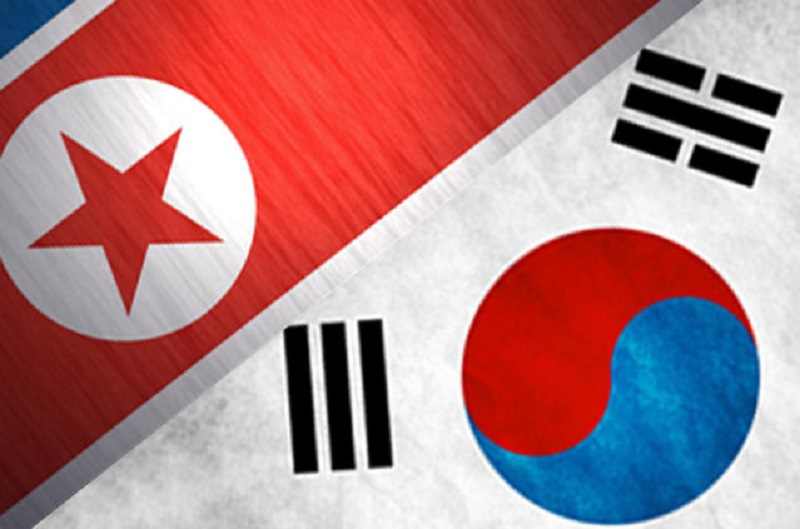 A high level North Korean delegation has also been sent to Vladivostok.

The holding of the Moon-Putin talks had been requested by Moscow following a prior meeting at the Blue House in Seoul between president Moon Jae-un and Nikolai Patrushev, Secretary of the Security Council of the Russian Federation (SCRF). .

While the Moon-Putin Vladivostok talks have been officially confirmed, in all likelihood, the two delegations (North and South Korea) will also meet behind closed doors, with president Vladimir Putin potentially playing a historic role in promoting a bilateral DPRK-ROK understanding, with a view to averting a US led war.

It is important to note that president Putin had previously warned the Trump administration that “continuing hostility between the US and North Korea was close to deteriorating into a “large-scale conflict” and said the only way to de-escalate tensions was through talks”. (Daily Express, September 5, 2017)

Also of significance, Japan’s Prime Minister Abe and President Putin will also be meeting in Vladivostok on September 6, on the sidelines of the Eastern Economic Forum. 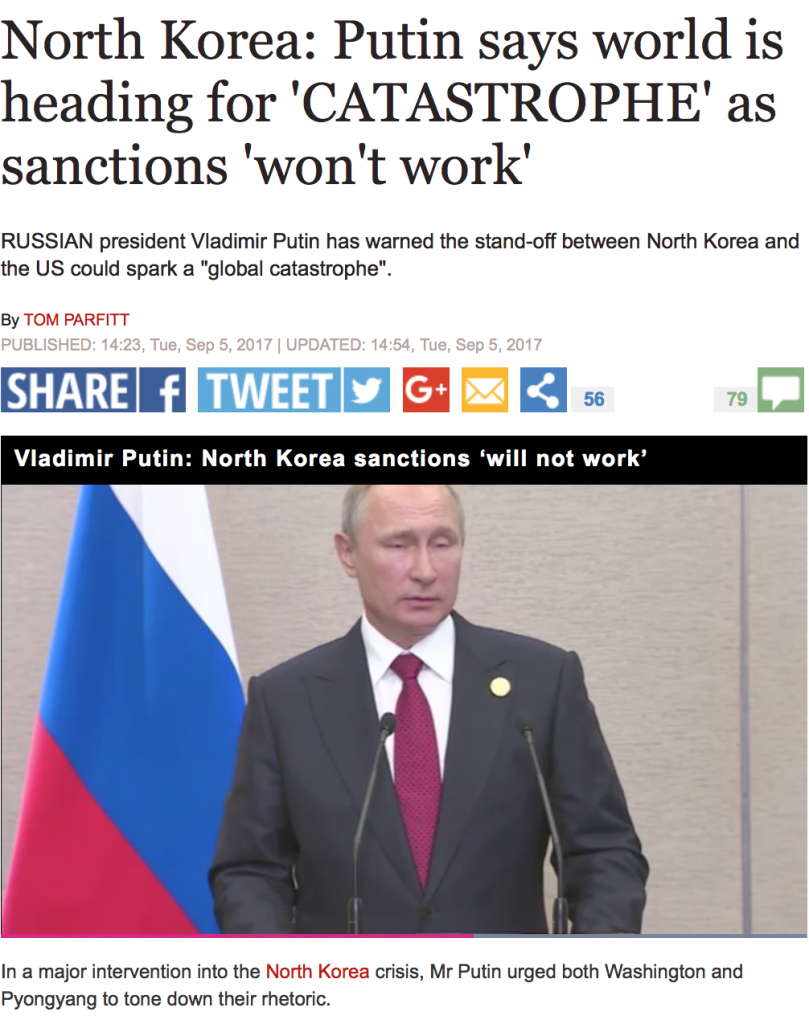 Moreover, two of the three signatories of the 1953 Armistice agreement (namely the DPRK and China) will be present at these meetings.

The US is not a member of the EEF.  Several important US business interests will nonetheless be present. Has an observer mission been sent by Washington?

Towards a Bilateral North-South Peace Treaty

What should be envisaged is the eventual signing of a bilateral Entente between the DPRK and the ROK, with a view to establishing Peace on the Korean Peninsula. In other words, the “state of war” between the US and the DPRK (which prevails under the armistice agreement) should in a sense be “side-tracked” and annulled by the signing of a comprehensive bilateral North-South peace agreement, coupled with cooperation, trade and interchange.

In this regard, what underlies the 1953 Armistice Agreement is that one of the warring parties, namely the US has consistently threatened to wage war on the DPRK for the last 64 years.

The US has on countless occasions violated the Armistice Agreement. It has remained on a war footing. Casually ignored by the Western media and the international community, the US has actively deployed nuclear weapons targeted at North Korea for more than half a century in violation of article 13b) of the Armistice agreement. More recently it has deployed the so-called THAAD missiles, which are also directed against China and Russia.

The US is still at war with North Korea. The armistice agreement signed in July 1953 –which legally constitutes a “temporary ceasefire” between the warring parties (US, North Korea and China’s Volunteer Army)– must be rescinded through the signing of a long-lasting peace agreement.

The US has not only violated the armistice agreement, it has consistently refused to enter into peace negotiations with Pyongyang, with a view to maintaining its military presence in South Korea as well as shunting a process of normalization and cooperation between the ROK and the DPRK.

The fundamental question to be addressed is the following: How can the 1953 Armistice agreement be replaced by a Long-lasting Peace Agreement given Washington’s persistent refusal to enter into negotiations?

If  one of the signatories of the Armistice refuses to sign a Peace Agreement, what should be contemplated is the formulation  of a comprehensive Bilateral North-South Peace Agreement, which would de facto lead to rescinding the 1953 armistice.

The legal formulation of this bilateral entente is crucial. The bilateral arrangement would in effect bypass Washington’s refusal. It would establish the basis of peace on the Korean peninsula, without foreign intervention, namely without Washington dictating its conditions. It would require the concurrent withdrawal of US troops from the ROK and the repeal of the OPCON agreement.

Sunshine 2.0. and the Candlelight Movement. The Demilitarization of the Korean Peninsula

Supported by the Candle Light movement, Moon Jae-in’s presidency potentially constitutes a watershed, a political as well as geopolitical landmark.

President Moon has confirmed his unbending commitment in favor of dialogue and cooperation with Pyongyang, under what is being dubbed Sunshine 2.0 Policy, while also maintaining the ROK’s relationship with the US. 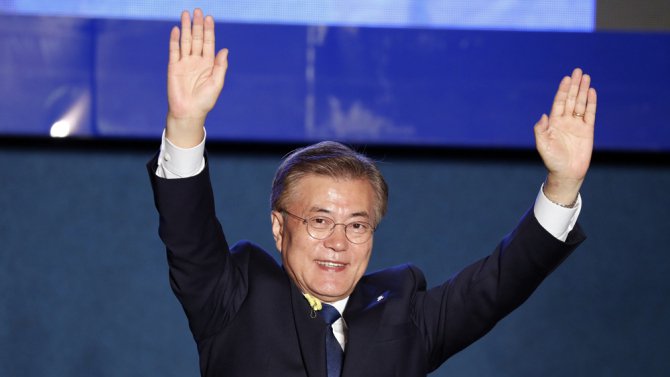 President Moon’s commitment to cooperation with North Korea coupled with demilitarization, will require redefining the ROK-US relationship in military affairs. This is the crucial issue.

Moreover, there are signs of internal disagreement (and conflict) within the ROK government with South Korea’s Defence Minister, Song Young-moo, openly blaming president Moon of leaning in “a direction that strengthens the military standoff,  rather than … dialogue.”

In the present context, Washington controls the ROK Ministry of Defense and has de facto control over ROK foreign policy as well as North South Korea relations. Under the OPCON (“Operational Control”) agreement, the Pentagon controls the command structure of the ROK armed forces.

Ultimately this is what has to be addressed with a view to establishing a lasting peace on the Korean peninsula and the broader East Asian region.

In 2014, the government of  President Park Geun-hye postponed the repeal of the OPCON (Operations Command) agreement “until the mid-2020s”. What this signified is that “in the event of conflict” all ROK forces are under the command of a US General appointed by the Pentagon, rather than under that of the ROK President and Commander in Chief.

It goes without saying that national sovereignty cannot reasonably be achieved without the annulment of the OPCON agreement as well as the ROK – US Combined Forces Command (CFC) structure. 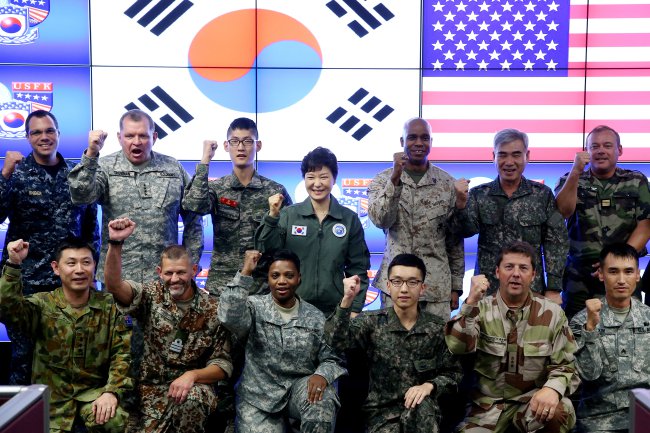 As we recall, in 1978 a binational Republic of Korea – United States Combined Forces Command (CFC), was created under the presidency of General Park (military dictator and father of impeached president Park Guen-hye). In substance, this was a change in labels in relation to the so-called UN Command.

“Ever since the Korean War, the allies have agreed that the American four-star would be in “Operational Control” (OPCON) of both ROK and US military forces in wartime …. Before 1978, this was accomplished through the United Nations Command. Since then it has been the CFC [US Combined Forces Command (CFC) structure]. (Brookings Institute)

Moreover, the Command of the US General under the renegotiated OPCON (2014) remains fully operational inasmuch as the 1953 Armistice (which legally constitutes a temporary ceasefire) is not replaced by a peace treaty.

It should be understood that a US led war as formulated by Defense Secretary Mad Dog James Mattis against North Korea would engulf the entire Korean nation.

Given the geography of the Korean peninsula, the use of nuclear weapons against North Korea would inevitably also engulf South Korea. This fact is known and understood by US military planners.

The US sponsored state of war de facto is directed against both North and South Korea. It is characterised by persistent military threats (including the use of nuclear weapons) against the DPRK. It also threatens the ROK which has been under US military occupation since September 1945.

Currently there are 28,500 US troops in South Korea. Yet under the US-ROK OPCON (joint defense agreement) discussed earlier, all ROK forces are  under US command.

What has to be emphasized in relation to Sunshine 2.0 Policy is that the US and the ROK cannot be “Allies” inasmuch as the US threatens to wage war on North Korea as well as South Korea.

The “real alliance” is that which unifies and reunites North and South Korea through dialogue against foreign intrusion and aggression.

The US is in a state of war against the entire Korean Nation.

And what this requires is the holding of bilateral talks between the ROK and the DPRK with a view to signing an agreement which nullifies the Armistice and sets the term of a bilateral “Peace Treaty”.

In turn this agreement would set the stage for the exclusion of US military presence and the withdrawal of the 28,500 US forces.

Moreover, pursuant to bilateral Peace negotiations, the ROK-US OPCON agreement which places ROK forces under US command should be rescinded.  All ROK troops would thereafter be brought under national ROK command.

Bilateral consultations should also be undertaken with a view to further developing economic, technological, cultural and educational cooperation between the ROK and the DPRK.

Without the US in the background pulling the strings under OPCON, the threat of war would be replaced by dialogue. The first priority, therefore would be to rescind OPCON.

What is presented above is a summary of a  longer text prepared in the context of  Prof. Michel Chossudovsky’s presentation at the Korea International Peace Forum’s June 10th commemoration conference, marking  the 30th anniversary of the 1987 June Democratic Uprising (6월 민주항쟁), ROK National Assembly, Seoul, June 10, 2017.

Breaches of the armistice have not been exclusively American. The Americans threaten war, but the North has been infiltrating the South for decades. Tunnels, aggressive patrolling in the DMZ, submarines in ROK waters, shelling of small islands off the coast, the list has been long. The question remains whether it happens out of aggression, or out of fear. I reckon during the Cold War it was the former, but after the fall of the USSR and the increasing disparity between the North and the South in the South’s favor it was probably the latter.

That being said, a North/South peace treaty would do wonders to reduce tensions, as the US would be deprived of the bases it would need to wage war against the North. Thus easing the North’s fears. It would be a good thing, not to mention a massive diplomatic coup for Putin if he manages to pull it off.

I do wonder though how far the North is willing to go. This is a regime that while afraid of US regime change also needs the US as a boogeyman to scare its population. People are willing to put up with a lot of discomfort in wartime, or in this case a state of perpetual cold war. But would the people of the North still tolerate hunger and discomfort if the specter of war was removed?

The problem is the US needs the bogeyman and not the other way around and the US likes creating bogeyman , they can’t exist without it and they would be in the hot water you have explained. The North doesn’t have the hunger issues as it has even developed that area , just a misconception in the west as always. China does a bustling trade and really doesn’t give a flying horse what the US says or does as long as they stay out of their business.

President Putin is the wise very clever and the only world top class President. Wait and see he will unite the two Korean brothers and Japan will for the first time relax and feel safe after Hiroshima and Nagasaki atomic bomb attack.Japan will live in peace with its Korean and Chinese brother.USA/NATO frightening insecurity threats to let Japan and South shivers were ecposed and will cease forever.Go Putin Go viva peacemaker viva.Viva freedom fighter President viva.I wish I can shake his hand.