On January 10th, MSM started publishing reports claiming that two Russians indicted in the Robert Mueller probe were also allegedly linked to the murder of the three Russian “journalists” in the Central African Republic in July 2018.

great catch by @shustry: one of the men allegedly involved in the killing of the 3 Russian journos in CAR last year was also indicted by Mueller, as part of the Prigozhin indictment in Feb. 2018 https://t.co/syKxKLVkDH pic.twitter.com/SJOQwoZ69B

The Time article reported that exiled tycoon Mikhail Khodorovsky himself gave a press briefing in London on January 10th and alleged that “several Russians linked to Evgeny Prigozhin, a powerful ally of President Vladimir Putin, conspired to lure the murdered journalists into an ambush on a country road in the Central African Republic, where they were shot dead on the night of July 30. Among those implicated in the investigation was Mikhail Burchik, who was indicted alongside Prigozhin last year for allegedly interfering in the U.S. presidential elections.”

While the Radio Free Liberty report claimed that private investigators, hired by Khodorovsky held a press briefing on January 10th in London. The Dossier project allegedly tied private military contractors from the so-called Wagner group, which MSM usually ties to Prigozhin and CAR law enforcement officials, who all took part in the murder of the journalists.

The differing versions may be a result of one outlet posting a pre-written text. That comes down to speculation. Furthermore, Time reported that the outlet had not confirmed any of the information in its report.

Regardless, the official version by the Russian Foreign Ministry is that the three journalists were killed in a robbery that had gone wrong. Furthermore, the three journalists, initially hired by Khodorovsky had no press credentials upon entering the Central African Republic. CAR officials said the perpetrators were Arabic speakers “in turbans.”

Time reported that a spokeswoman for the ministry declined to comment on Khodorkovsky’s allegations in detail, saying only that Russian law enforcement agencies are still working on the case of the murdered journalists. “The investigation is ongoing,” she said.

Radio Free Liberty cited Dossier researcher Yekaterina Kretova, who said that “taking into consideration the evidence contradicting the official version of the crime and the evidence indicating the involvement of mercenaries of the Vagner group and also considering the intentional efforts to obstruct our independent investigation, our goal is — with the support of the United Nations — to get the C.A.R. and Russia to conduct an independent and thorough investigation of these murders.”

Furthermore, the outlet’s Russian-language network Current Time TV reportedly had a skype interview with Khodorovsky on January 10th. According to him “the operation was well-planned and was aimed at extracting the information from journalists on what they had learned on the arms trade and the use of private military companies in the region.”

“The Dossier investigators say they were told by two C.A.R. soldiers who were manning a checkpoint in the city of Sibu that a vehicle with three Caucasian men and two Africans passed through the checkpoint less than 20 minutes after the journalists passed through and less than an hour before they were killed,” Radio Free Liberty reporting.

One of the Africans was identified as police officer Emmanuel Touaguende Kotofio who was allegedly in contact with Prigozhin’s presumed employees.

“Kotofio organized and carried out monitoring of the [journalists] and, at the least, was present at the time and place of the murder,” the investigators concluded.

“According to purported mobile-phone records that the Dossier investigators presented, Kotofio was in contact 98 times in July and August with Aleksandr Sotov, who was allegedly a security instructor with M-Finans, a Russian company tied to Prigozhin’s firm, M-Invest. Sotov allegedly registered his C.A.R. mobile phone using a U.S. passport with the name Barret Travis Hammond,” Radio Free Liberty reported.

But the alleged connections don’t end there:

“Sotov, according to the Dossier probe, was in turn in contact by telephone more than 100 times with Valery Zakharov, a former St. Petersburg police investigator who has also been connected with the Vagner security group. Dossier also presented a purported document indicating that the same Valery Zakharov works as “a security adviser to the president of the C.A.R.””

The investigators also allegedly found evidence indicating that Sotov worked for the fabled Wagner group. That evidence was not provided or commented on further. Prigozhin has also repeatedly said that he has no connection to the Wagner group, which has essentially turned into a meme, perpetuated by MSM.

Nevertheless, the Wagner group and Prigozhin were sanctioned by the US Treasury Department in 2017.

Essentially, MSM is propelling a narrative that tries to link Russian activity in the CAR to the Russian witch hunt in the face of the Mueller probe. This may potentially be an attempt to pressure Trump to start opposing Russia and China in Africa more actively.

It is a not-very-well-hidden attempt to impact US internal politics.

In its essence, the reports and Khodorovsky’s alleged “investigation” are attempting to link indictments based on no evidence, with conclusions of investigations, also based on no evidence. It would be no surprise if it were successful, since Prigozhin has been a focus of numerous reports claiming that he is the “chef” of the “evil mastermind” Putin.

I think stories in the Western press about this subject have the same impact on Western readers as they do on me. Africa? Yawn, who cares?

This story has nothing to do with the main stream media – either in Russia or the US. The investigation for the story comes from the “alternate” media in Russia. It’s by no means unusual for journalists to be murdered in Russia – especially ones investigating the Wagner mercenaries; for example, Boris Nemtsov (“Putin. War”). Besides being associated with Wagner and the Internet Research Agency, Evgeny Prigozhin is also associated with the intimidation and murder of dissidents according to the alternate media site Novaya Gazeta (https://meduza.io/en/feature/2018/10/22/from-putin-s-chef-to-putin-s-hitman?utm_source=t.co&utm_medium=share_twitter&utm_campaign=share via @meduzaproject):

On October 22 [2018], the independent newspaper Novaya Gazeta published a new investigative report claiming that people associated with the Putin-connected catering industry oligarch Evgeny Prigozhin are responsible for attacking opposition activists and bloggers, as well as carrying out several murders and poisonings in different countries, including in Syria. The newspaper says it got this information from a 61-year-old man named Valery Amelchenko, who allegedly participated in some of these operations, beginning in 2012. All that’s known about him is that he was arrested in St. Petersburg in 1999 for robbery and sentenced to prison for seven years. He was released early on parole in 2004, but it remains unclear what exactly he did for Prigozhin’s people afterwards. Amelchenko described several of his secret missions to Novaya Gazeta, and then disappeared on October 2. Russian police have added him to a national wanted list, and federal investigators have opened a preliminary case against him. Novaya Gazeta’s Denis Korotkov speculates that Amelchenko was either abducted, killed, or he might have even staged his own disappearance. [my insert in brackets]

Six journalists from Novaya Gazeta have been killed during the Putin Presidency. Threats and even murder has not prevented reporting by Novaya concerning important stories. The Dossier project originally sent the three journalists to CAR to document the presence of Wagner. Further investigations by The Dossier Project led to the conclusions in this article. This is hardly shocking news considering the long history of journalists killed doing their job in Russia. The Russian government and the Putin apologists in the western alternate press will continue to lie and deny the Russian government’s likely complicity in the murders.

AM Hants
Reply to  TomWonacott

Not unusual for friends of Khodorovsky to end up 6′ under. Funny, his people should be reporting it first. Isn’t he linked into ‘Integrity Initiative” courtesy of his good mate Browder? Together with their PR mate Timmy Bell, who just happened to handle Litvenko, together with spinning ME Wars, based on lies.

Death rate of Russian journalists decreased, once Khodorovsky got locked up, when President Putin came to power. 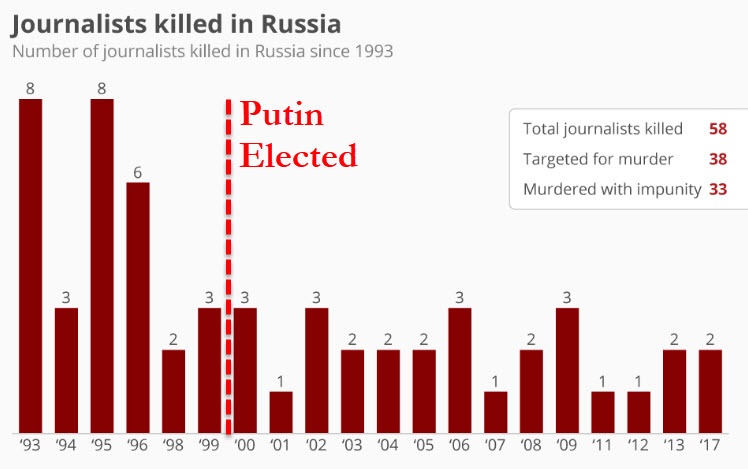