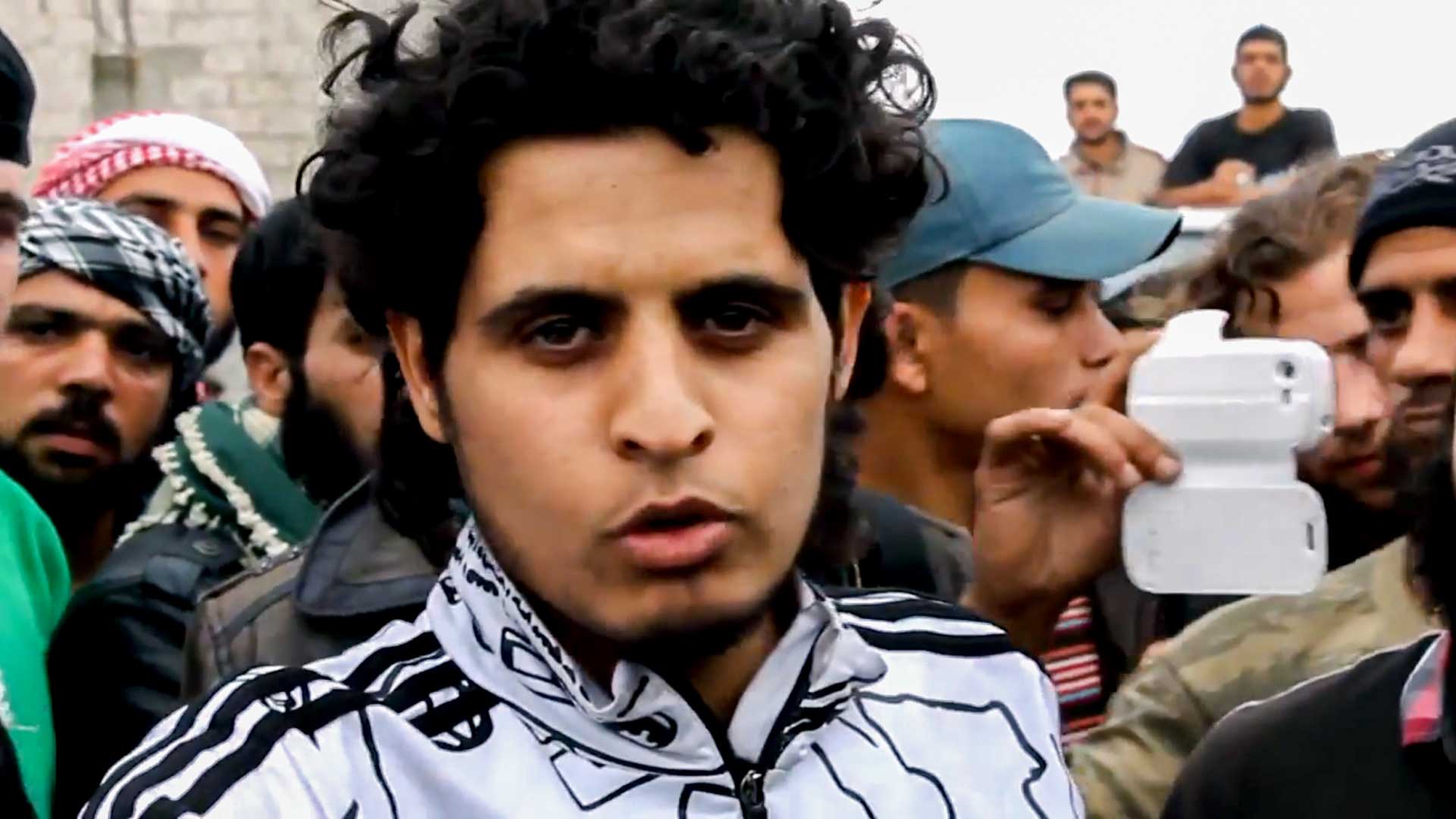 Abdul Baset al-Sarout after withdrawing from Homs in 2014.

Abdul Baset al-Sarout, a prominent Syrian opposition figure famous as “the singer of the revolution,” was killed by the Syrian Arab Army (SAA) in the northern Hama countryside.

Major Jamil al-Saleh, General Commander of Jaysh al-Izza, where al-Sarout was serving as a military commander, announced this development in the noon of June 8.

Opposition activists said that al-Sarout was severely injured on June 6 while he was participating in a large-scale attack on government-held areas in northern Hama. He was immediately transported to a hospital in southern Turkey. However, he died from his wounds.

Hours before receiving the fatal injury al-Sarout appeared in a video released by Tahir al-Omar, an opposition reporter. Al-Sarout threatened  that he will invade Deir Ezzor, Homs and even Daraa.

“God’s willing, the Russian Air Force will be broken in our stronghold, Idlib … The revolution will return and expand,” al-Sarout says in the video.

Originally a professional football player from Homs, al-Sarout joined the protests in mid-2011. He became famous for his anti-regime songs and cheers. However, some of these cheers reflected his radical views. In 2011, France’s Canal+ released a report of Homs’ protests showing al-Sarout cheering “Homs has taken the decision, we will genocide the al-Awaites.”

Al-Sarout was among the first known figures in Homs to get arms against the SAA in late 2011. He participated in forming its own Free Syrian Army (FSA) group known as the Bayada Martyrs’ Brigade. During that period, he was featured in the 2013 war documentary The Return to Homs.

Following the defeat of the FSA in Homs in 2014, al-Sarout and his fighters withdrew from the city and later pledged allegiance to ISIS.

With the decline of ISIS in Syria and Iraq, al-Sarout moved to the northern governorate of Idlib, where he eventually enlisted in Jaysh al-Izza. The radical group is known for its close ties with Hay’at Tahrir al-Sham (HTS), the former branch of al-Qaeda in Syria.

Dubbed an “icon” of the so-called Syrian Revolution, the death of al-Sarout is for sure a major media blow to both the radical and moderate wings of the opposition.

Bloody terrorists is going to meet his 72 demonic virgins in hell.Good kill

Even running out of virgin goats :)

…and a “little bit” of that globalresearch.ca/the-arab-spring-made-in-the-usa/5484950 and a pinch of that youtube.com/watch?v=nUCwCgthp_E

Certainly was which is why it took so long for the Yankees to comment when it happened. Basically they tired of their Point man in Egypt Mr Mubarak and got their Moslem Brotherhood jihadiman Mr Morsi in. Haha. Then he started to act independently and the Yankers did not like that ,so unseated him!

Clever, yes, maybe the reason… or the U.S. have connection at different levels with radicals (to hide track), as suggest by Russian intelligence.

If only the Western leaders who supported the jihadis met the same fate.

They richly deserve it.

Yes finally the world is free from this so called “freedom fighter”. Rest in pieces?

After you Gary . maggot

Maybe you are next…. counting down quickly now; you inbred POS on the sole of my shoe.

This Mustapha is a bloodthirsty Grey Wolf salafist jihadi or apologist.

Good news. One more filthy cunt of a shit-eating maggot dead at the hands of the glorious SAA!!!

Injured terrorist are moved to Turkish hospitals just like the one sent to Israelo hospitals.

One so satanic and ugly will not be missed by Syrians.

He also looks rather gay.

Would note surprised. Many of those jihadis are gay as .

And neither by his football team!!!

Sadly this handsome guy who only wanted freedom, clima change, green energy and women as equal Colonel General commanders fighting for the civilised world, had to die as cannon fodder for US/Natos Inherent Resolve Freedom 70 countries Coalition. So sad.

He got what he deserved.

Reuters, Guardian, NYT literally defending this jihadi terrorist as a “freedom fighting, loving revolutionary” trying to bring peace and love to Syria LOL imagine that. He was Ex-ISIS and joined Nusra (Syrian Al-Qaeda) then joined NLF/FSA. and we’re supposed to believe he’s a secular freedom fighter who loves Syrians HAHAHA zionist/pro jihadi propaganda at its finest

Yep. The Yankers always trying to convince us it is a rainshower when they are pissing on our heads. I for one ,see through their bullsht.

Oh man SAA has eliminated so many heavily armed HTS al-qaeda fighters these past couple days. Almost all of them had modern kevlar military helmets, kevlar bullet proof vests, and tactical assault rifles provided by Turkey. clearly they weren’t bulletproof enough for the SAA lol

How did they achieve it all?

I’m sure he is writing a new song for the Devil while watching a soccer match…….,,,,in hell, moooaahahahahaha!!!!!!

Violets are blue, Roses are red, This piece of shit Is finally dead.

He will be reunited with another famous Syrian celeb turned terrorist, both deserved what they got.

It is the fate of these people when they are face to face with real soldiers and army and not just a bunch of civilians, which is what they mostly terrorised.

he may rest in peace