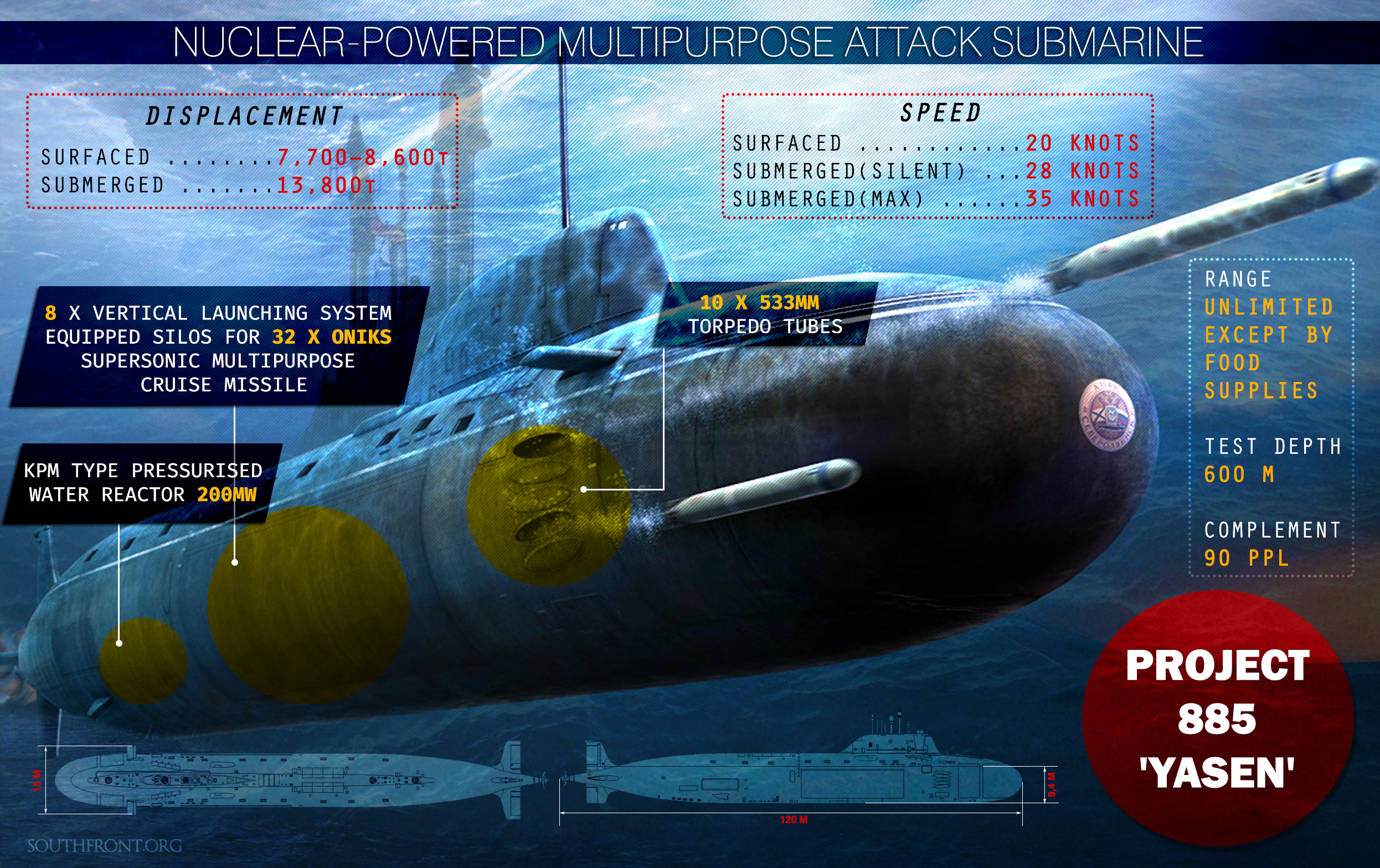 Project 885 Yasen is a class of Russian nuclear-powered multipurpose attack submarines. Project 885 Yasen design is a derivative of the Project 971 Akula. The original idea was a design with a multi-task profile, allowing to change the profile of weapons loaded to adjust to several missions. It features a significant cruise missile capability with eight vertical launch tubes for cruise missiles aft of the sail.

In total 12 Project 885 Yasen submarines were planned for the Russian Navy. The first of them, K-329 Severodvinsk, entered in service with the Russian Northern Fleet in September 2011. Four more advanced Yasen-M-class submarines are set to be delivered by 2016.

Looking at the information provided by SF it is clear that Russia is developing a formidable array of weapons. Many of these are beginning their active service life but wont be deployed in planned numbers for a few more years. For example one of the above type submarines is in service but the planned compliment wont appear until about 2020.

My point is does Russia have this time available? If conflict comes then I think probabilities would give a window of may be at most two years. If conflict has not happened by then I think the chances diminish.

What do others think ?

I think it depends on whether or not the US collapses by then, so long as the US maintains military power and the current political doctrine, war with Russia or China remains inevitable.

I also see the development of these weapons as a double-edged sword, on the one hand they deter potential attacks and prepare Russia for the eventuality of war, on the other they reduce the window of opportunity for NATO to conduct a successful campaign against Russia thereby pushing them ever closer to beginning such a campaign.

Yes your second point is something I also think.

Pushing that war would break NATO. The Su-24 episode already had numerous NATO members castigating the Turks for their stupidity at the Council meeting. There is no enthusiasm for such a thing in Europe. France’s president might play along, but his people like Putin better than him by a wide margin. Is he going to strap on a FA-MAS and go himself? Germany is flatly opposed to most military ops, likewise the Czechs. You can already find bitter and unenthusiastic comments from Bundeswehr people about this kind of thing. They seem to have killed the Czech representative, which does’n;t indicate the Czechs are playing along with anything. You might get some Poles to go along for the ride, just because they don’t like Russians, but not much else.

Article 5 is strictly defensive, so they’d have t engineer a convincing false-flag, and technically, each of the contracting parties are only obligated to take “such action as it deems necessary, including the use of armed force, to restore and maintain the security of the North Atlantic area.” So legally, the amount of response given is up to the state in question, on the basis of their assessment of ‘the security of the North Atlantic area.” That leaves a LOT of wiggle room.

It would be nice if the push to war with Russia did break NATO, I agree that there’s no desire in most of Europe for another major war on the continent, most remember the impact of the last two. America sadly hasn’t had that experience yet (I’m happy for them that they haven’t suffered in that way, but it does dramatically change ones outlook on war so it’s still a good experience in the long run) they may well get it if they bring about WW3 as Russia has no interest in fighting in Europe, they’ll neutralise America and then wait for the Europeans to cease hostilities.

While NATO may once have been a stabilising force in Europe, now it’s largely unnecessary as most European states seem to lack the ability and desire to conduct large scale military operations alone.

What do you think nuclear weapons are for? There will be no conventional wars between USA and Russia. This modernization is necessary but conventional weapons will only play their role in hybrid warfare and insurgencies in the years to come.

Why do you think a 7-8000 tons submarine carries conventional missiles? They cost about a billion dollars to build, if conventional weapons are not going to used, building this submarine would be an exercise in futility. I believe that they are intended to be used against enemy ships in case of war, limited war. Oniks is a supersonic cruise missile with conventional ordinance aimed at carrier battle groups, specifically carriers. You can control the political dynamics by buying additional time to complete the rearmament program; This is a new weapon to neutralize the NATO sea power.

If they wouldn’t build the best available nukes the nuclear powers would lose in diplomacy. The ultimate argument of the kings were cannons, now it’s nukes. Except they won’t be used exactly for that reason.

Cannons did not assure mutual destruction. If you had cannons in the 16th century and the other side did not, you had a distinct advantage in a battle, if both sides had cannons, they would use the cannons to develop holes in the enemy line so that massed troops could exploit that opening and break the cohesion of the enemy army.