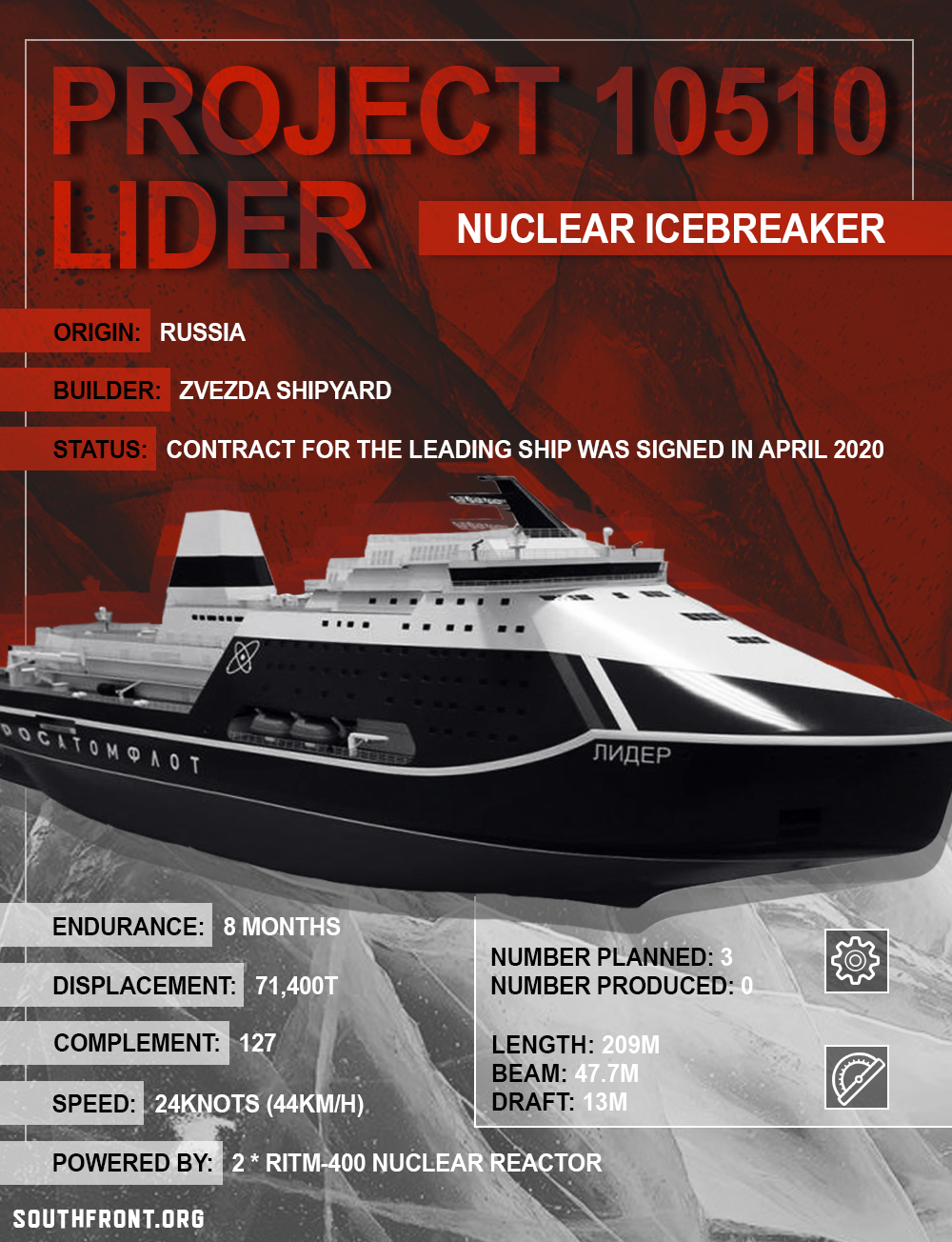 On April 23rd, in Murmansk and Vladivostok, a remote signing of the contract for the construction of the project 10510 “Leader” nuclear icebreaker between FSUE Atomflot and SKK Zvezda LLC took place.

The state customer for the construction of the icebreaker is Rosatom State Corporation, the developer is Atomflot Federal State Unitary Enterprise, Zvezda SSK is the sole contractor for this contract.

The construction of the project 10510 nuclear icebreaker will be carried out by the Zvezda Far Eastern shipbuilding complex on the basis of an order of the Government of the Russian Federation dated March 27th, 2019. According to the terms of the contract, the commissioning of the vessel is planned in 2027.

“Today an important step has been taken in the history of the nuclear icebreaker fleet,” commented Mustafa Kashka, director general of the Atomflot FSUE Atomflot.

“The Leader will be equipped with two RITM-400 type nuclear reactors developed by Rosatom specialists.

The total capacity of the icebreaker will be 120 MW, which will allow the vessel to overcome ice more than 4 meters thick.

The commissioning of this nuclear icebreaker will allow Rosatomflot to guarantee safe and regular operations in the eastern region of the Arctic, provide year-round navigation in the waters of the Northern Sea Route, and open up new opportunities for commercial high-latitude routes. ”

The nuclear icebreaker “Leader” will be built according to the technical design of the Central Design Bureau “Iceberg”. The ship will have a nuclear power plant RITM-400 installed.

The main characteristics of the Project 10510 nuclear icebreakers are the following:

The composition of the equipment of the power plant:

Separately, The Ministry of Industry and Trade is going to oblige state customers to build ships only in Russia.

According to the draft order of the ministry, companies building ships on budgetary funds, even at the stage of competitive procedures, will be able to choose only those shipyards that are ready to fulfill the order in accordance with the 719th decision on localization.

At the same time, Kommersant sources in the industry note that they have already encountered a refusal by Russian shipyards to take orders because of the high load.

The Ministry of Industry and Trade did not respond to a request for comment.

The Federal Antimonopoly Service reported that they have not yet received a document for consideration.

In Rosmorrechflot and FSUE Rosmorport, which, as part of a comprehensive infrastructure plan must order and build a significant number of ships, did not respond to requests for comment.

Nadezhda Malysheva from PortNews adds that the shipyards still have a problem with certificates of compliance with the 719th decree:

“Theoretically, the plants are ready to issue them, but it is practically unknown how this will work. In addition, certification can increase the deadline for delivery of the vessel by an average of two months, and it is not clear who will pay for it.”

This where the money from that anime destroyer went to