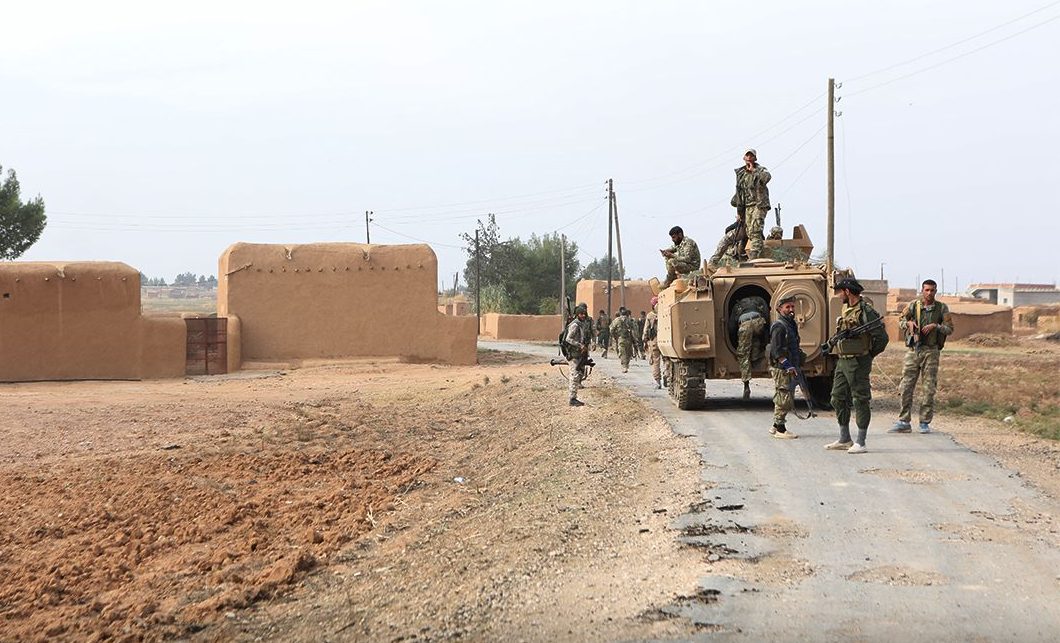 The SNA was formed in 2017 by a number of Turkish-backed factions. Today, the coalition rules Turkish-occupied areas in northern and northeastern Syria. The coalition is also present in the northwestern Syrian region of Greater Idlib.

On April 1, the Suleyman Shah Division, one of the largest SNA factions, announced its defection from the coalition’s 1st Brigade. The group didn’t provide any explanation. 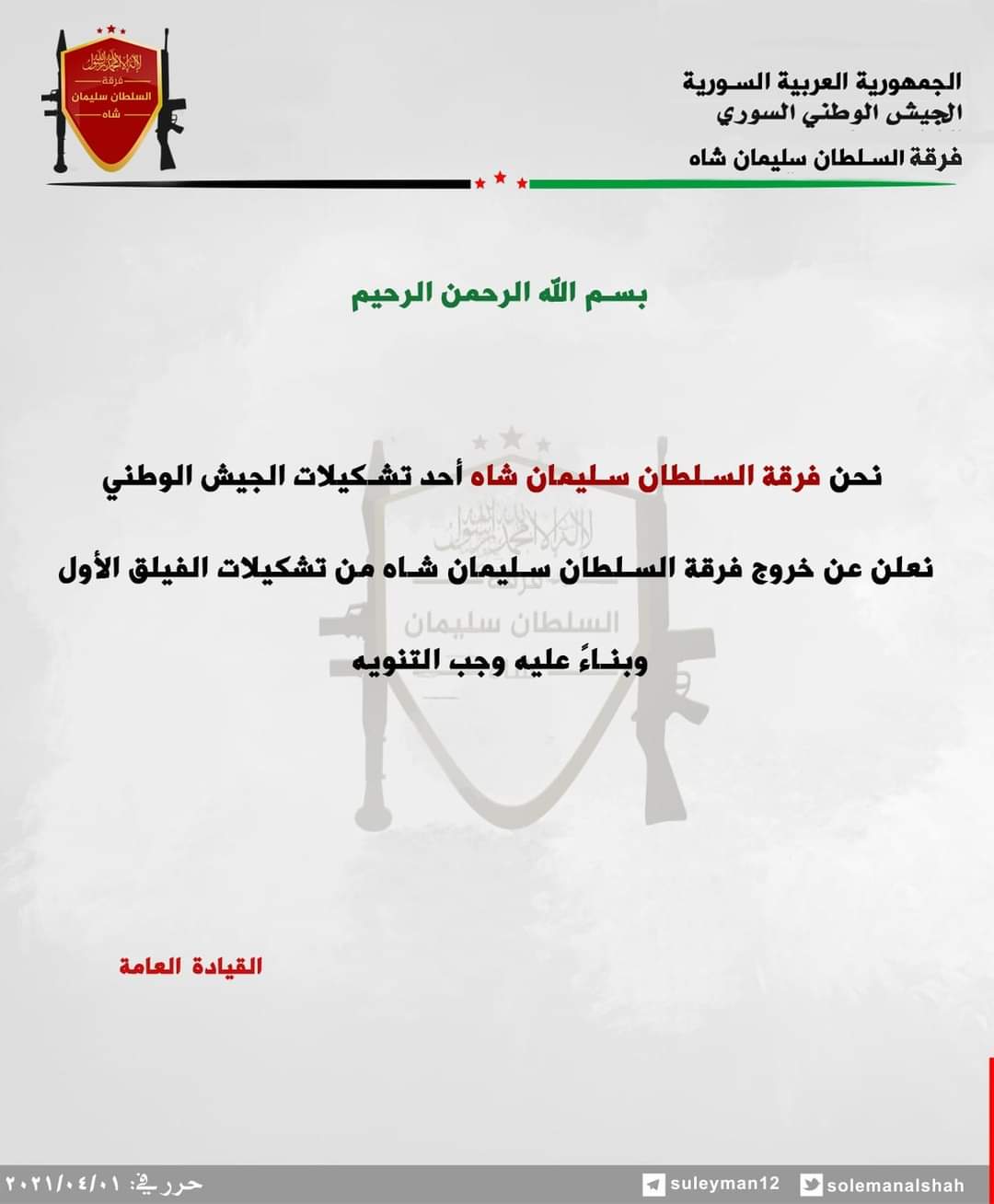 The Suleyman Shah Division, founded a few months into the war in Syria in 2011, is led by “Abu Amsha,” whose real name is Mohamad Jasim. The group, which participated in all major Turkish-led operations in Syria, is infamous for its criminal activities.

Abu Amsha’s announcement embarrassed the SNA’s higher command, which quickly released a statement claiming that the Suleyman Shah Division has joined the 2nd Corps. The group is yet to confirm this. 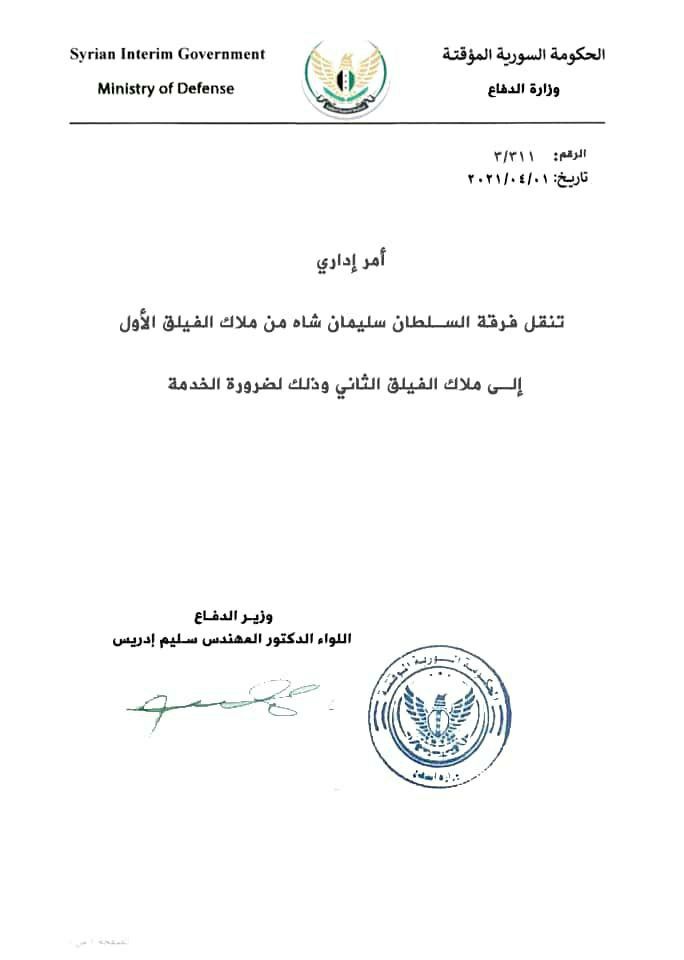 This problem is only one of many plaguing the SNA. Earlier this week, the Syrian Observatory for Human Rights revealed that the Turkish intelligence, the main backer of the SNA, had halted the salaries of the coalition’s militants.

Dozens of SNA militants took to the street in the Turkish-occupied town of al-Bab on April 1 to demand their salaries. The issue is yet to be resolved.

The recent developments highlight the failure of the SNA project, which was meant to unify all anti-government forces in Syria. Today, the coalition is mere tool to serve Turkey’s interest in Syria. Its factions have become notorious for their criminal activities.

If the western economy collapses, even the headchopper end up in trouble, demonstrating that terrorism is tied to double thread to the West, this is what we are starting to observe in Syria as in many other sectors of the Western economy, everything is linked Together, even terrorism.

If. You observe nothing. You create maybee made by no vitamines.

It certainly is linked, and to make it worse for the West, their mercenary terror gangs only have one safe place to flee to, and that is NATO Western Europe.

MI6 and their fair weather friends would do well to recite the words of Walter Scot.

” Oh what a tangled web we weave/When first we practice to deceive’ “. :)

The US led practice of fighting wars with criminal gangs is a testament to the abject cowardice of Western politicians.

“Turkish intelligence, the main backer of the SNA, had halted the salaries of the coalition’s militants”

I suggest massive self immolation manifestation as the visible sign of protest :) make one huge sh*t kebab for Erdogan ! Put your Wahhabi mercenary a$$ on fire !

Ypu seemes to represent the majority in this. You all want to kill each other and do it. As You are now, I can only see its a very good solution for peace in the world.

You not even has a language for peace and define honor and respect upside down. You even raise Your girls for buy and sale. Who should support that.

Their main problem is, they have no base for the civile state apart from military rule by Sharia. By that those men only control their bought wives and children.

Typical muslim version but in the worst versions.

As written before its like having too many old loud roosters fighting each other. I would prefare the female hens, at least they are laying eggs and makes less noise.

So, you concede that the Syrian based terror factions – holed up in Idlib – are just that. Welcome to reality, for those in the Jens Cubicle, at the troll farm.

My conserns are well descriebed. I dont expect You have seen them at all.

You forget or deny people becomes extremists, when they have no other choise for a life. Thats no Syrian thing. By that minor smaller fanatic groups suddenly grow to movements with many “yes-sayers”.

So for Syria as well as the rest of the world I look for simple as well as advanced reasons.

I fx see Syria as the rest of the world has urbanized a lot, because there was no possible life in the poor farmland and even in the richer parts already overcrowded too.

Thats why You get those many Jihadists as oposition for not even getting new made jobs by govermental investments in the towns added education for today and the future for simple growth.

Kurds by PYD/SDF actually has made an own program for exact same thing for the farmland with less in farming itself but new kinds of foof making, simple opgrading by smaller facctories and an infrastructure, where You and they even can export to nearby countries already importing a lot of food.

That has to be organized well by networks with trucks with cooling, You can rely on. Byut thats not possible and not even allowed by the greedy Baathists.

So this is about people not taking care of the whole country should be deciders giving no light for a good life for so many millions. I dont think so.

Its not even possible here. None here would elect any treating their own like that. And we ceratainly woudl not give extremists influence.

Instead we would try Our best to absorbe problems and include as many as possible.

We do that and are even blamed for it here.

Crminals vote here. People with no jobs vote here. LGBTs vote here. voemn er equal to men and vote here, We even has a female Premiere minister as well as Vestager in the EU top.

We are number one i low corruption. Some say we are number 3 in happynes. The GDP is very good. We pay a lot of tax, which gives us a lot of free help.

So we are collapsed. We give the extrenmists free speach. People then know them and they cant say, we try to jail them. And people dont vote on them, because they know their programs.

But the reasons for the extremes are fiascos are, we take care of each other.

And these guys are supposed to be the most loyal of Erdogan’s foot soldiers, LOL. The new Ottoman Empire’s already having problems with one of it’s most loyal Turkman factions, so does that mean the Arab factions who also belong to the Syrian interim Government are also suffering the same problems, I think it does, but magnified by ten. :]

The turks don’t belong in our region, you know this. In ancient Persian history, all these lands were empty, and these basturds started trickling in over the few hundred years when the Russians and the Chinese tightened the pincer on them and fukkin steamrolled them. They’ve been looking for an accommodation ever since amongst us. We should put them all to death, now that they’ve given us a good enough jihadi Al-Qaeda reason no? Shame on Iran for tolerating these mongol.

All the terror factions are essentially warlord gangs who enjoy stealing other peoples property. Gipsys with guns. :)

The Turks are a bunch of Armenian, Greeks, Arabs, Iranians and Albanians who speak Turkish. Not real Turks.