Pro-government forces, backed by the Rusian and Syrian air forces, have been rapidly advancing towards the Euphrates River in the province of Aleppo.

Since March 4, the Syrian army and the National Defense Forces have liberated over 8 villages, including Abu Jarin, Atwiyat, Qasr Hadla, Tal Mai and Rasm Kbar and now are likely aiming to reach the Water Treatment plant which will allow government troops to increase the security of the water supplies to the city Aleppo.

When this done, pro-government forces will likely focus on the ISIS stronghold of Deir Hafer.

Meanwhile, the ISIS-linked Amaq news agency reported that over 130 airstrikes were delivered by Syrian and Russian warplanes against targets in the province. 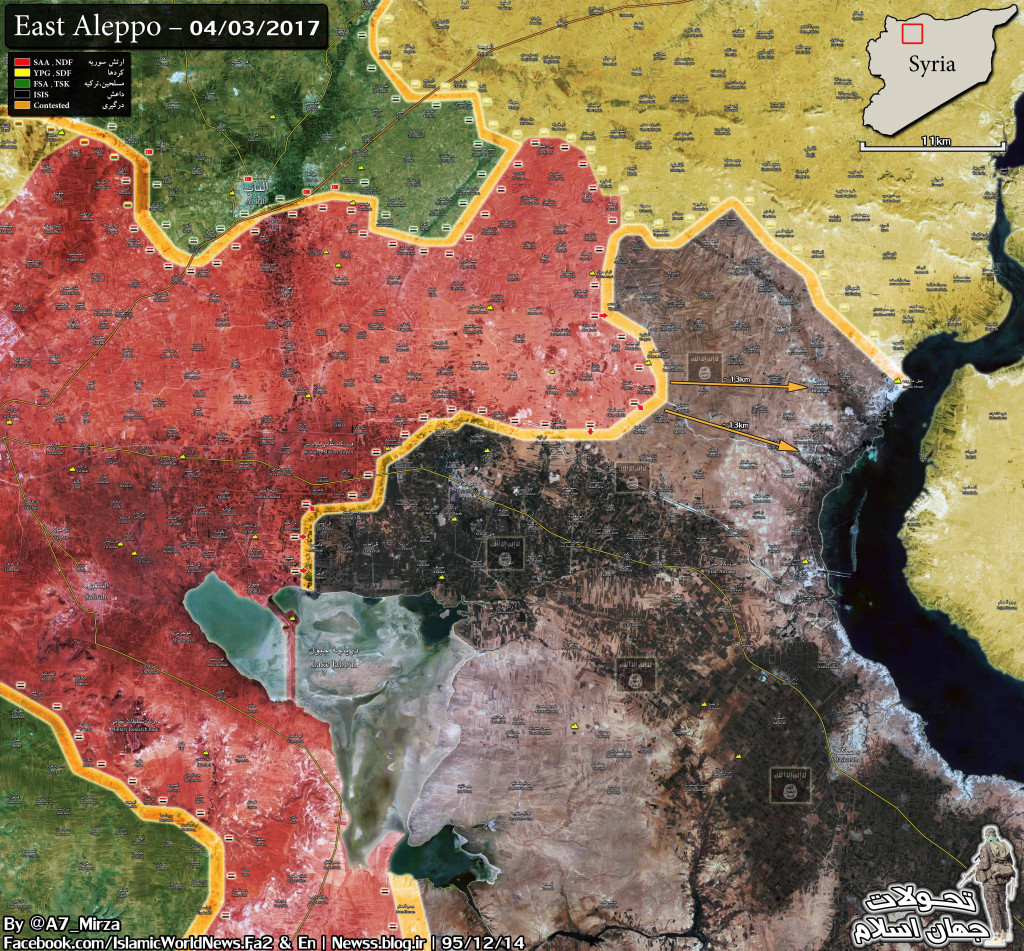 Turks might had regret naming their operation Euphrates Shield… They really thought they would reach it! LOL

true.. those 2 months in Al-Bab and the agreement between the Kurds and Syrian goverment about Manjib put them in a very complicated situation.

The russian strategists are smarter than one could imagine. They are attacking where it is easier, enhancing their propaganda, cutting supplies and human resources of Isis, boosting the morale of their own army, gattering supplies and looting easy military equipment and encircling the enemy. All at the same time. Brilliant.

I’m not sure that the Russians deserve al the credit. Having been pushed out of Aleppo etc, the US head-chopping, heart-eating rapers are far more vulnerable to firepower and it’s showing. The reports from Palmyra suggest that they are relying on conventional weapons like captured tanks and these are sitting ducks compared to hiding in cellars and tunnels in a city full of civilians. Good fir the Syrian PBI say I.

yea, once u taken care of all the easy places, then move onto the harder ones, and secure COMPLETE VICTORY

Although, maybe Aleppo was not so easy?

I am certain SAA/Russia will win this war, but I wonder how much longer?

im afraid this proxy war is just the beginning of a major conflict of Sunnis vs Shias. I hope i’m wrong but if Sunnis (Saudi Arabia, Qatar, Turkey, etc.) decide to directly suport their proxies in the war to avoid their defeat, Iran, and maybe Russia, will have to openly do the same and that will be best excuse Israel/US need to attack them.

i agree that Saudi’s and Qatar’s ground troops are having a hard time in Yemen and that Turkey is facing strong internal struggles but they still could offer air support or heavy/advanced equipment to FSA if US allow them to do that. I dont think they will give up after 5 year and so many billions invested.

If they were smart they would , but Erdogan doesn’t seem to know which way the wind is blowing . By the way those billions , was not invested but stolen oil from both Iraq and Syria . His son made big coin .

Haven’t they been doing that already? And now they are on the verge of defeat. In any case I hope the us/israeli/Saudi/turkey side utterly loses

Haven’t they been doing that already? And now they are on the verge of defeat. In any case, I really want the us/Israeli/Saudi/turkey side to utterly fail

Russia has over 100 short range nuclear missiles in Syria aimed at Israel now, so Israel is not going to to anything directly. Israel would rather see 100 million Goyim killed in Syria then have one single Jew break a fingernail in Syria. As Henry racist supremacist Jew Kissenger says referring to American soldiers, let the “stupid animal beast American solders’ die for Israel.

It was satisfying that Syrian/Russian strategists saw through the sham of Al-Bab and did not engage. You may have noticed that as soon as SAA turned away suddenly ISIS was gone and Turkey was in control (of course the ISUS turkmen just changed their black uniforms to the standard Turkish ones and suddenly the jihadists were defeated. It was a crude sham and a bit of a joke for turks to be waging mock battles with ISUS.) Great to see SAA taking back their land.

true.. most videos in youtube about the “battles” of FSA against ISIS were obviously fakes, without real engagement. Several tanks and armored veicules were destroyed indeed but, in the end, ISIS got paid and just joined FSA or moved.

Tanks were destroyed as sitting duks left in the open without backup, I don’t know who they were trying to fool, if they can’t fool random guy on the internet they certainly wouldn’t fool a military officer.

I take it back about the need to let the Turkish army fight Daesh in this area. Turkey and the KRG get along well enough for the KRG to allow turkish army transit to the Daesh front in Iraq, without any need for Turkish ground access to Daesh in Syria.

On the Iraqi front nobody is waiting for Turkey to get involved, other than IS itself, waiting for their turkish friends to intervene on their behalf.

Turkey has annexed Syrian territory in Idlib and have built a wall but apparently not much is said about it.

Test a few cruise missiles , they should not leave it standing .