Pro-government forces fully secured the towns of Busra al-Sham and Hrak in southern Syria after a reconciliation agreement agreement had been implemented in them, according to the Syrian state media.

Units of the Syrian Arab Army (SAA) and its allies entered these towns earlier accepting a surrender from local militants. On July 17 when armed groups finished surrendering their heavy and medium weapons, these towns were declared fully liberated.

Meanwhile, the SAA advance targeted militants’ positions in the settlements of al-Mal, Aqrabah and many nearby points, which, according to pro-government sources, are now also under control of the SAA. However, these areas still have to be secured. 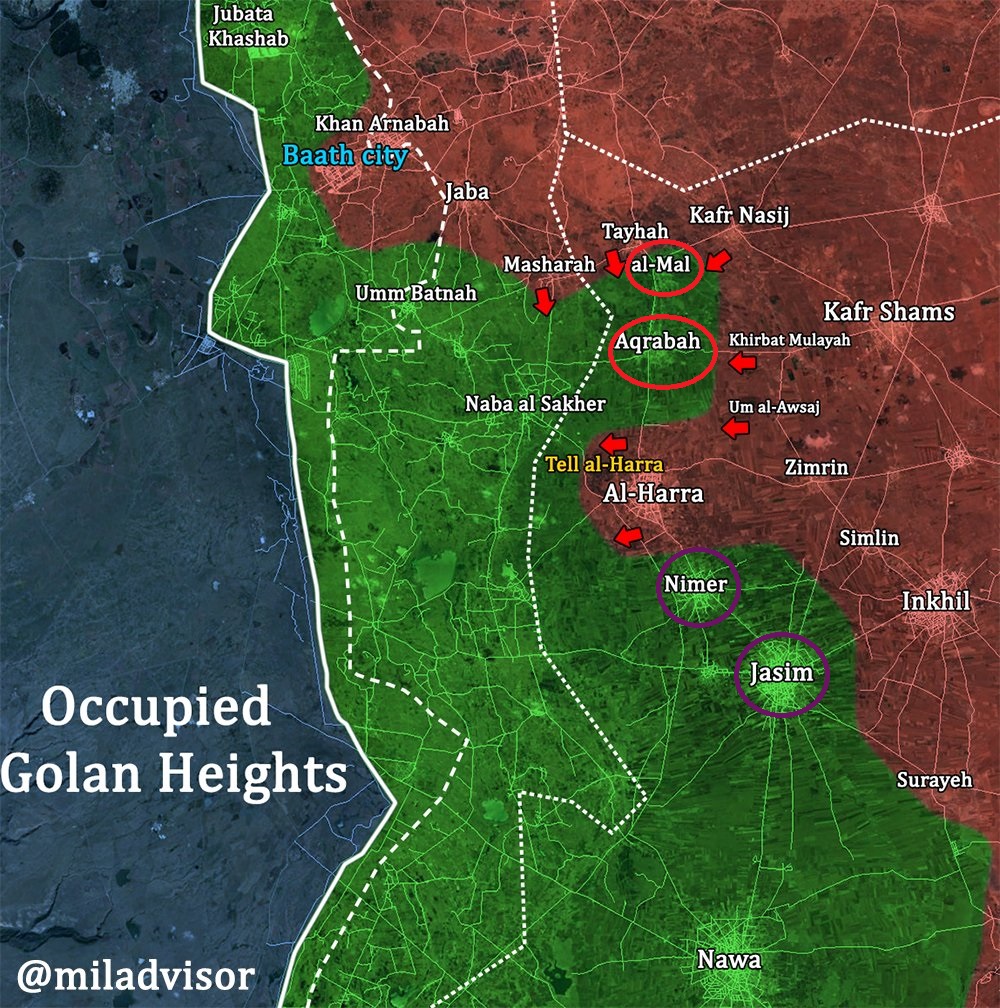 Syrian forces and their allies enjoy freedom of operation against US and NATO proxies (ISIS and Israel). No more time for them in Middle East.

Now Assad, Putin and Russian defense minister thinking that elimination of US, NATO and their proxies Israel and ISIS from Middle East is necessary to stop further bloodshed because the US and their allies main purpose is to steal lands and Petrol from Middle East countries and stop them from education and development.

Things can only get better….

Something wrong in Iraq, may be Abadi not interested to leave government to recently elected president. That is why nation of Iraq protesting.

Abadi is a jew stooge…any true iraqs president first order would be the ending of all foreign occupation.The usa has dozens of miliary bases in iraq.(The usa has 22 bases in syria alone as mentioned by russia last week).The latest

What has Abadi done so far? ZERO….. he even allows the us airforce to constantly bomb PMU fighters which are part of the iraqi armed forces.Its treason by Abadi.The PMU knows this.Tensions are high between Abadi and his loyalists and PMU.Last week headquaters of PMU in Bagdad, there was a shootout between federal police and PMU.The federal police then surrounded thecompoundwith heavy weapons.The usa will do everything possible to stay in iraq and it looks like they are succeeding.It seems that al-sadr will come to terms of Abadi.Dont forget that Al-sadr already once made a deal with the usa during the years 2004-2007 when the us had him wounded and boxed in.And dont forget, that during saddams execution the name Muqtada Muqtada Muqtada was yelled a dozen times.Muqtada Al-Sadr.He (although he is shiite) was against the PMU beiing officially part of the iraqi armed forces.

I just pray to God that all US and NATO forces and their proxies peacefully withdraw from whole Middle East and then they educate, develop and prosper. I cannot tolerate this brutalities on the Middle East states.

Published on 12 Jul 2018 click on link for better view. Russia and Iran are defeating ISIS in Syria. Now Russia, Iran, China and Pakistan want to stop ISIS expansion in Afghanistan while having questions about unmarked helicopters flying ISIS to Afghanistan and US are ignoring it. Does it not make sense who is behind ISIS and who is against? These 4 countries and others in the region must unite against repeated terrorist activities that backed by US and their nonsense allies. Hope these professional global killers will go down soon.

It’s about the size of the late East Ghouta. Not long now.

There a mess of maps showing different green and red areas ! Is it possible to put the right map ? which is the right one ?