Efforts by Madrid to stop a Catalonia independence vote, currently slated for October 1st, seem to be growing more hostile by the day.  Earlier this week Spanish police seized control of Catalonia’s finances, seeking to ensure that separatist politicians could not spend further public funds on the referendum, and conducted raids across Catalonia to confiscate ballots and campaign materials from printing shops and delivery companies.

The Spanish police detained more than a dozen people in the region of Catalonia on Wednesday, drastically escalating tensions between the national government and Catalan separatists. The episode occurred less than two weeks before a highly contentious referendum on independence that the government in Madrid has vowed to block.

The police raided the offices of the Catalan regional government early Wednesday and arrested at least 14 people, including Josep Maria Jové, secretary general of economic affairs. The arrests were not expected, but hundreds of mayors and other officials in Catalonia had been warned that they would be indicted if they helped organize a referendum in violation of Spanish law.

Hundreds of supporters of Catalan independence immediately took to the streets of Barcelona to protest the arrests. Jordi Sanchez, the leader of one of the region’s biggest separatist associations, used Twitter to urge Catalans to “resist peacefully,” but also to “come out and defend our institutions.”

According to Reuters, the increasingly hostile crackdown by the Spanish police has led Catalan leaders to acknowledge for the first time today that plans to hold a referendum on independence are now in doubt following the arrest of senior regional officials and the seizure of campaign material by national police.

“It is obvious that we won’t be able to vote as we would have liked,” Oriol Junqueras, deputy head and economy minister of the regional government, told local television TV3. “They have altered the rules.”

It was the first time the promoters of the referendum had acknowledged their plans were in doubt, although Junqueras said he said he was convinced voters would still turn out in numbers.

It is not yet clear whether the police operation would be enough to prevent the vote overall or if it could instead bring fresh momentum to the secession campaign.

Polls show about 40 percent of Catalans support independence although a majority want a referendum on the issue. 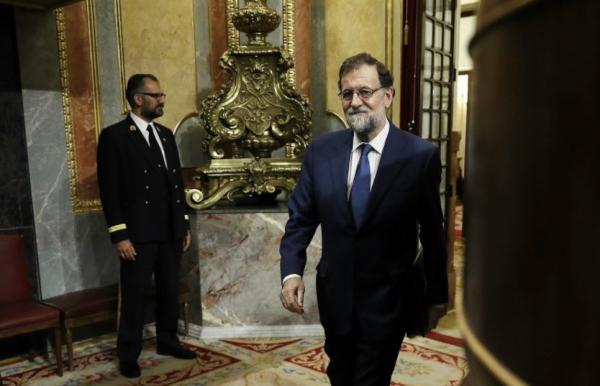 Meanwhile, as a sign of the growing hostility and Madrid’s intentions to do all that is necessary to block a vote, Bloomberg notes that Spain has hired cruise liners specifically to mount a massive force of 16,000 police in a Catalan port.

Spain has discreetly hired ferries to be moored in the Port of Barcelona as temporary housing for possibly thousands of police specially deployed to keep order in rebel Catalonia and help suppress an illegal independence referendum.

The country’s interior ministry asked Catalan port authorities to provide a berth for one ship until Oct. 3 — two days after the planned vote — saying it was a matter of state, a spokeswoman for the port said by phone Wednesday. The vessel, known as “Rhapsody,” docked in the city about 9:30 a.m. Thursday, she said.

The aim is to amass more than 16,000 riot police and other security officers by the Oct. 1 referendum, El Correo newspaper reported on its website. That would exceed the number of Catalan police, the Mossos d’Esquadra, who serve both the Catalan and central governments. 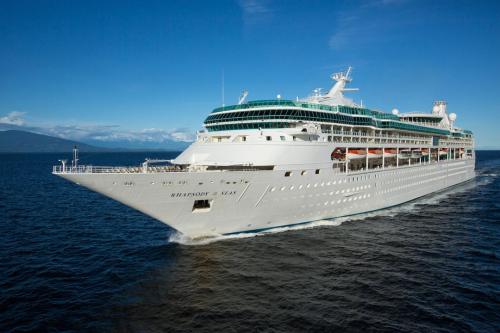 the Rhapsody of the Sea cruise ship.

Still, the Catalan government says it can hold the vote, and recently announced that it had stored about 6,000 ballot boxes in a secret location. “The referendum will be held and is already organized,” Mr. Romeva said. “Clearly the conditions in which it will be celebrated are not those that we wished for.”

Separatist leaders, however, have accused Mr. Rajoy of plunging Catalonia into a state of emergency rather than negotiating the terms of a referendum.

“The issue that is at stake today isn’t the independence — or not — of Catalonia,” Raül Romeva, Catalonia’s foreign affairs chief, told a group of foreign correspondents in Madrid on Wednesday, “but democracy in Spain and the European Union.”

Mr. Romeva said that Catalonia would hold the referendum as planned, and that Catalan lawmakers would act to honor the result within 48 hours — meaning they would declare independence unilaterally if people voted for it.

Now,why do we have a feeling that placing a riot police force of 16,000 in a Catalan port, ready to pounce at a moment’s notice, will not help reduce the local push for independence…

Spain is now at the level of Honduras and Paraguay or Indonesia !! Maybe below the status of those Nations perhaps !! They have plenty of experience and are the Standart Worldwide in Tyrany : They invented The Inquisition and The Jesuits. They invented Etnic Cleansing (Yoos). It seems they are asking for another round of Convent and Church Burnings, and this time, Newspapers and TV Channels plus Banks will be added.

Bullshit. The inquisition was NOT invented in Spain. Read a bit.

‘ Invented ‘ or not, there was an inquisition of jews in Spain and this was justified because the Muslim rulers there had used the Jews to administer the tax collections etc from the ethnic Spanish populace.

Given the right circumstances the same thing could happen today in response to the interest slavery of Zionist Banking systems.

That is what the zionists fear .

I hate when people like you that does not know a shit about a country they have never been there starts to talk like if they were the fucking kings of the world. SPAIN did not invent those things, it was the church. Every single of those things you are speaking about were done before Spain was even a country as we know it is today. Comparing Honduras, Indonesia or Paraguay to Spain? Really? There is no way someone could say that shit seriously, I hope you’re joking.

Catalan separatism is another Zionist project aimed at taking revenge against the Inquisition. The terrorist psychopathic Jews have a motto “Never forget”. They see all gentiles as their enemies and especially hate any gentile nation who has ever attempted to defend themselves against Jewish infiltration and subversion. These pictures should speak for themselves:

The ships have been hired because there is no economic rooms in Barcelona and nearby towns to accommodate around 6000 agents (not 16000) without wasting a lot of money. Barcelona is one of the most demanded touristic locations in Spain and so is VERY expensive.

Spain comes from Phoenician Hispania and means land of rabbits, then it became a Roman province until they called in the Visigoths as mercenaries to expel Vandals and Suebes… the Arabs and their Berber mercenary army invaded the Visigoths kingdom thanks to the treachery of Count Julian against king Roderick… according to the sources … while Castile and Castilian mean land of Castles and or referring to it, and are synonym with Catalonia -Catalan…

Jews took refuge in Catalonia fleeing from the inquisicion!..beside many Jews lived there as well as Toledo,Sevilla and Cordoba during Al Andalus and after that during Aragon Cristian Kingdom!..

you are also jew

In Spain we have Arab/Jews blood…but Zionism is a cancer!

And a course of chemotherapy could kill that cancer :)

You and your jews… You are possesed, guys. What´s wrong with you, Had some Jew stollen your favourite bobby car? Grow up!

I am not jew stupid! i am talking about the Spanish history!

Only the new ‘facts’ of Zionist approved history is allowed these days. :)

In hindsight protecting the Jews from the inquisition was likely a poor decision :)

The problem is that Spain has Arab blood in his vein..it means to be always fighting between neighbors and dividing!

Nothing says peace, freedom and democracy more than 16,000 waffen SS Franco acolytes trying to suppress it.

Segurity Forces of Democratic King of Spain you shold write. And respect for law and Constitution is the motive. Bye.

Catalonia is a commie shithole that is pro-immigration and pro-refugee. Spain might be better off without it

If the EU makes all the decisions the country used to make there really isn’t much use for still having a massive bureaucratic system on both layers. But ofc the bureaucrats don’t want to lose their jobs.

When kosovo and bosnia wanted to secede every politician of zionato wanyed to get involved to help poor poor rebels and thus destroyed yugoslavia to help a bunch of headchopper muslms.thus was formed a nest of vipers in europe.

Now that it is christians wanting to secede ,no one cares! Whats wrong ,arent catalans bloodthirsty or muslim enough for you zionato? P.s i actually dont support breakup of spain, i just wanted to show hypocrisy !

You don´t need no ballot boxes. Use the internet and a code, like the one on the credit card. stupid.