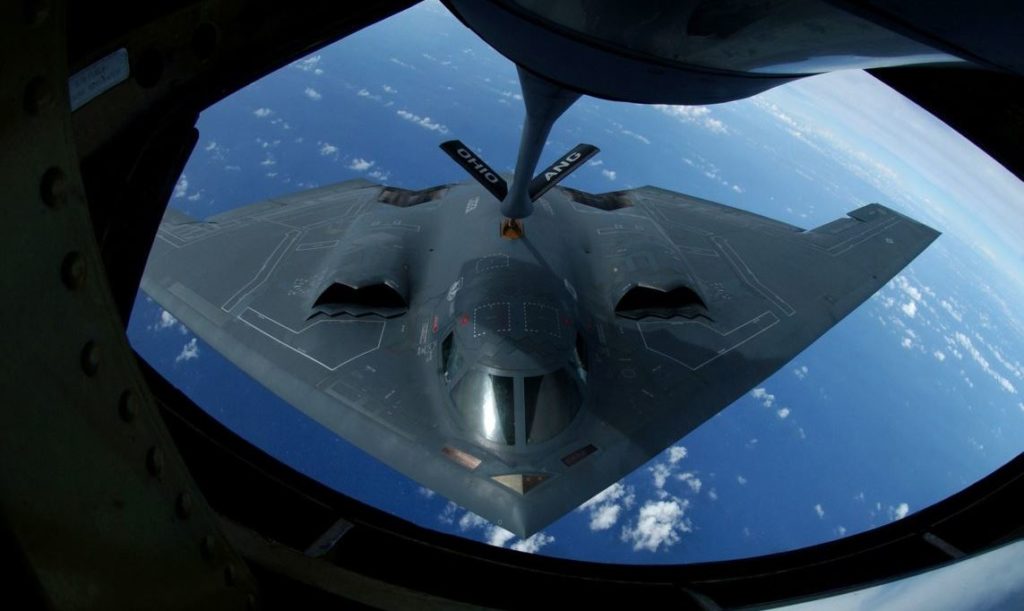 On March 23, 1983, 35 years ago, President Ronald Reagan unveiled his space-wars program, the SDI, to intercept and destroy incoming missiles and other weapons for battling in this new domain. It never came to fruition, as the technology that existed at that time was insufficiently advanced to meet the requirements. But times change. It has been announced that the project is once again to be pursued. The US plans to deploy weapons in space, Russian Foreign Minister Sergey Lavrov issued a warning about this in January. That warning proved accurate.

Donald Trump believes that space is becoming a “warfighting domain,” just like the land, air, and sea, and is thus encouraging the creation of a space force on par with the other branches of the armed forces. It was hardly an off-the-cuff comment.

The idea enjoys strong support in Congress. Pushing forward such an initiative would strengthen the president’s position at a time when he needs it the most. Some lawmakers say that force could be created as part of the Department of the Air Force in just three to five years. The proposal is not popular among the military brass, but on March 13 the president made his views known. “The president is very focused on outcomes. He has prioritized space, he has recognized the threats that have evolved, and the pace with which they’ve evolved, and he recognizes that as a warfighting domain,” says Kenneth Rapuano, assistant defense secretary for homeland defense and global security.

The initiative dovetails with the recently issued National Security Strategy. Some initial steps have already been taken. Deputy Defense Secretary Patrick Shanahan, the chief space adviser, provided lawmakers with an interim report on upcoming space reforms this month. An updated report is due August 1.

No doubt Donald Trump’s statement was prompted by President Putin’s March 1 address to lawmakers in which he unveiled some details about Russia’s new weapons. The balance of forces in the air, land, and sea is not tilting in America’s favor, but domination of space could change that picture. The Joint Vision 2020 states that the US should dominate and control the military use of space.

What could this mean in practice? It’s logical to assume that all the satellites belonging to the branches of the military and STRATCOM will operate under the new command. No doubt the structure will have teeth, such as the HTV-2 and AHW hypersonic-glide-vehicle weapons, the Boeing X-37 spacecraft, and the Dream Chaser reusable space planes. The X-37 has flown several secret missions into orbit carrying mystery payloads. Anti-satellite weapons have been tested. Now that they have undergone testing on land and at sea, laser technology will move to space.

The 1967 Outer Space Treaty imposes no restriction on conventional weapons. The diplomatic efforts to reach an international agreement regulating space activities have been rejected by the US as disingenuous non-starters. In 2014, the UN General Assembly adopted a Russian resolution, “No First Placement of Weapons in Outer Space,” which was dismissed by Washington. The US has never come up any initiatives of its own.

So, the US wants to dominate space. But will it? The USSR has suspended many space-war programs, such as “space-to-space” munitions, which could be quickly brought back to life. The R36 ORB was actually the third stage of the well-known Voevoda (Satan) ICBM. Its warhead could be placed in orbit and left there for some time, reducing to just a few minutes the time required to strike any target on Earth. The weapon was even operational for a short period.

The have been programs to create space platforms, including some that were nuclear powered. Russia was the only country to successfully use Hall–effect thrusters to maneuver objects in space. In his famous “new weapons” speech, President Putin mentioned the Avangard boost glider that could be easily reconfigured for space-interceptor missions. In 1984 Russia launched a program to create the 79М6 Kontakt anti-satellite (ASAT) system as a direct response to US ASAT tests. The system carried a modified MiG-31D fighter on board that theoretically could attack as many as 24 satellites within a 36-hour period. The Kontakt never became operational, as tensions subsided and Moscow reached an agreement with Washington to terminate the program. It could be resurrected, leaving no American satellite safe. Some sources report that the development has already been revived. And almost all modern US systems are heavily dependent on satellites.

It could be that opening up discussions with Russia on measures to curb the militarization of space might be a much cheaper and more reliable way to safeguard US national security than throwing down the gauntlet. It’s quite likely that the US would touch off a race it won’t win.

Didn´t american spacecraft rely strongly on russian rocket engines? For example the RD-180 is used for the Atlas III rocket? The US didn´t make again strong rocket engines since the abortion of Apollo.

the russian engine is far cheaper and robust compared to US built engines , so it is better choice..

russian built engines couldnt even get their moon rocket to space withoutexploding lol !

now is working on it. and also elon musks rocket is stronger then any russian.

The Americans may think that they can militarize space, but they still have to deal with their own defense industry. Whose business model is based on extracting as much tax payer money as possible for the longest possible time before actually delivering something over time and over budget. Allowing the Russians and Chinese plenty of time to come up with possible counters for a fraction of the money the US will spend. Maybe if the former leaders of the former USSR had realized this in time the USSR would not have collapsed.

russia has zero rubel for this purpuse

Did you count them all?

And why should they? Let the Americans waste trillions, get piss poor results, then learn from their mistakes and built something for a fraction of that money. Or watch as the US finally goes into debt overload and crumbles?

Barba papa, i was an officer in reagans times. I remember, how very shit soviets from stars wars project. Ussr had no money. russia is dwarf in comparison to ussr. And now you are wrong. the develpment lasts decade. There is no copy paste. The technological advances you can not simmply steal and imply. Look at stealth technology. from yugoslavian war russians and chinese have peaces of f-117. until today were not able copy that old technology (usa has already 4th plane from that time). in the case of space weapons yanks are sooo much before russians! you all think on proton rockets, but exactly this is not important. the space shuttles are the key. and the amrican military uses in huge amount them. russians has nothing in hands.

The Russians and Chinese do not need to copy/paste American designs. It helps to know what they are up too, but the key to defeating the Americans is to not play the game according to their rules. The US wants to outfit its air force with stealth aircraft? Develop something that will negate stealth instead, like new radar and tracking systems. The US wants to field missile interceptors? Develop hypersonic gliding nuclear warheads instead.

And in the absence of that do what the Soviets did during the Cold War, buy an American who gave them information as to the locations of America’s nuclear submarines. You gotta love that American spirit of free enterprise and capitalism!

I tell you something: 90% of eastern military technique is copied western. this was in socialism, this si also today. simply check the dates.

i remeber, how smuggled we processors from west. russian technique runs on western chips. ;)

have a nice day!

I forgot to finish. If yanks complete their weapon system in space, they can easily destroy russian missile. therefore russia will not have 1-2 decades to copy and develope own weapons.

I think, the space shold be clean from weapons and also private firms should be excluded.

That’s assuming the Americans can finish their weapon system in time and on budget. Past experience does however point to the contrary. And so far, despite have the most insane military budget in the world, it has not given the US military a qualitative technological edge over its main rivals. The real strength of the US military is its large size, the many foreign bases it enjoys and the ability to deploy a large chunk of said military to places in the world, thanks to those bases. Qualities that no other military in the world enjoys. All that research money and procurement money however, that’s just a giant feeding trough to line the pockets of companies like Lockheed Martin and the corrupt politicians they have bought in Washington.

USSR, had internal contradictions, particularly the command and control economy, which was exploited by Yanki billion dollar programs. Over the 10 years between 79 to 89 it is estimated that they ploughed in almost $70 billion. A small price to become the World Superpower for the next 30 years. Fortunately, their short sighted greed has just about brought that dominance to an earlier than presumed collapse.

True. But in hindsight the Soviets could have averted matching the Americans in the Star Wars race, as ultimately the Americans have piss poor returns on their billion dollar programs.

The point is that the US or Deep State probably already have some kind of Space Fleet, the TR3-B is the one well-known vehicle, hundreds of sightings, there’s even a wikipedia article, which of course doesn’t discuss the kind of engines/drive. But a lot of Ufologists think that there are bigger instances of the TR3-B with side lengths of 60 and 200m. They are flown by the US Air Force, but supposed to be under the control of some transnational organization similar to the Trust in Stargate. It seems that these ARVs (Alien Reproduction Vehicles) aren’t allowed to be used in “internal” aka terrestrial conflicts, the aliens that either helped building them or just left the technology on earth in the past don’t want that kind of abuse.

Forces are ALREADY deployed according to leaked video:

actually it was part of the FOBS program, and was integrated much earlier than the “Satan” came out on the R-36 (SS-9 SCARP) heavy ICBM in the 60ies. The “Satan” denomination has been given to the R-36M missiles and refers to a much improved system.

FOBS was discarded because of the “outer space treaty”, in which US and USSR promised not to weaponize space.

It appears the US is going to unilaterally get out from another peace preserving treaty.