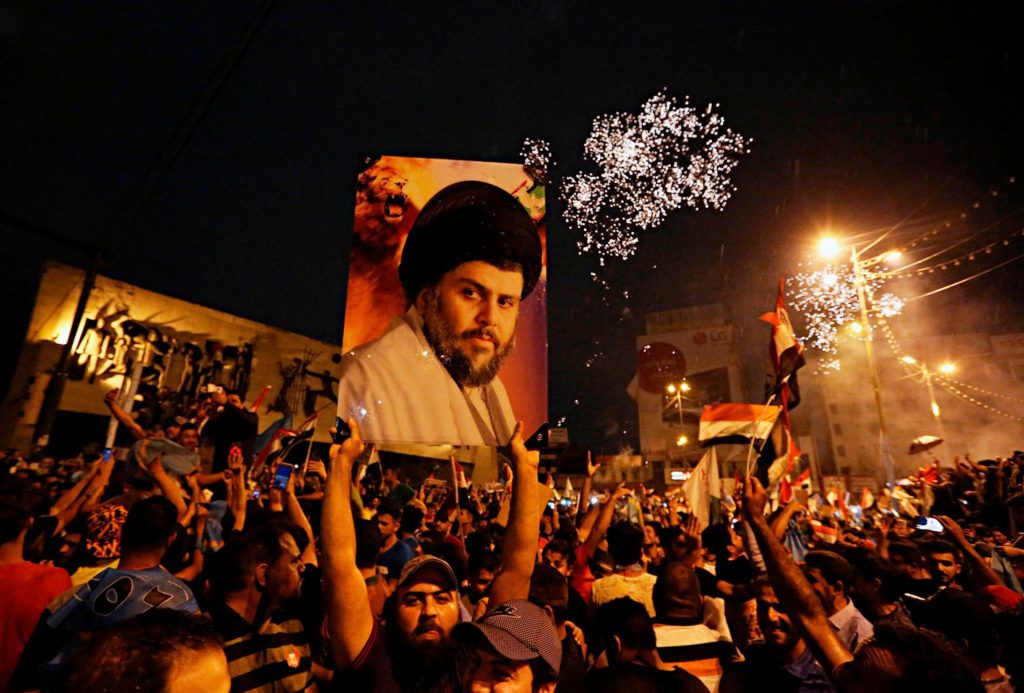 The Fatah Coalition led by a member of the Iraqi parliament Hadi al-Amiri, held the second place earning 47 seats.

The State of Law Coalition gained 25 seats followed by the Kurdistan Democratic Party (KDP) with 23 seats.

The Al-Anbar Is Our Identity coalition obtained 6 seats and Change Movement possessed 5 seats.

However, Sadr’s alliance with communists will still need to possess support, if he intends to form a coalition government.

According to the Independent High Electoral Commission, around 10.8 million Iraqis of 24 million eligible voters took part in the election, with a turnout of 44.52 %.

Iraq’s Independent High Electoral Commission had to announce the results 48 hours after the election, but the announcement was delayed due to the incident in the northern Iraqi city of Kirkuk. On May 16, several gunmen besieged some polling stations containing election staff, Reuters reported.

Al-Abadi claimed to recount the votes after “accusations of fraud and faulty machines” in Kirkuk.

Thus, Iraq’s election results are expected on May 17.

On May 12, Iraq held parliamentary election, the first one since Iraq declared the victory over ISIS. During the days after, Sadr’s alliance was holding the leading position.

Sadr became widely known after he had been in the head of two revolts against the US forces in Iraq after the 2003 invasion. Then, Washington even called the Shia militia loyal to Sadr the biggest threat to Iraq’s security.

Sadr is a threat to Iraq, his radical positions about USA and Iran might bring more war and instability to the Middle East. Abadi knew how to organize the Iraqi policy and to contain Iranian influence which is dominating Iraq while slowly reducing the American influence as well. With Sadr winning, the USA may try to create more instability to Iraq. Less USA and less Iran, that’s Abadi’s policy. An Iraq from Iraqis, to Iraqis. This is the only way to bring stability to Iraq, neither being an Iranian nor and American puppet.

An other stroke to Netanyahu the Israeli migrants will cry on victory of anti Zionist leader Muqtada al-Sadr’s alliance in Islamic republic of Iraq.

The shills are already coming out against him.

Well done. Congratulation to all Iraqi nation on peaceful election and to Muqtada al-Sadr’s alliance victory. May God give him the power and ability to kick out all foreign terrorist forces from Iraq, Syria and Palestine. Ameen.

Sadr and Fatah winning, I am very glad.

Muqtada is a guy in a skirt with a chip on his shoulder the size of Texas – never a good combination for a politician about to control power in the country where respecting different political opinions was usually considered a big character flaw. Seems to me old Muqtada swims well within the confines of Sadr City, being Shia version of Tony Soprano, but is way out of his depth once he ventures out of the ghetto. The man hates virtually everyone he comes into contact with: Iraqi Sunni for being Sunni and in Iraq, US Army for not being Shia and being in Iraq, Saudis and Kuwaiti – for not being Shia, being reach, decadent and around, Iranian mullahs – for being Shia and influential, Jews for not being Arabs and Palestinians for being good with Saddam for decades, Bashar Assad for being Arab nationalist and Arab nationalists in general and Baathists in particular for offing his old man…And that’s about the whole damn Middle east. The man is liable to get triggered more often than a 300lbs lesbian feminist in a strip bar… And that means Iraq will never stand with Syria and Iran against Zios and Yanks as long as he has anything to say about it…

More like he’ll be the one willing to take serious action.

Last year after Khan Sheykun false flag Muqtada called for – wait for it – Assad to step down in order to “stop the bloodshed” in Syria. And his one and only foreign policy trip was – wait some more – to Saudi Arabia in order to “improve Iraqi-Saudi relations”. Add to that a fatwa proclaiming that any Iraqy citizen fighting in Syria for Assad should be branded a traitor and you’ll have a clear picture of the type of “serious action” he’ll be taking…

Oh no, not electronic vote counting machines, that’s how the US rigs elections. You can bet the machines were donated by USAID(CIA).

Never trust a machine, humans should count the votes, and representatives of all political parties should observe the count.

as far as Sdar remain threat to US/israel its not problem but if he start shaking hands with saudi/bahrain and other whbhi state who has killed many shia and sunni and supported terriost then its problem. Sadr also recently blame Assad fro killing civilian. but iran /hezbollah and other iraqi ressitabce are supporting assad and syria in fight against terriost. it means sadr is going aginast this ressitance. look like sadr is using iraqi for saudi alliance . it will be big problem.