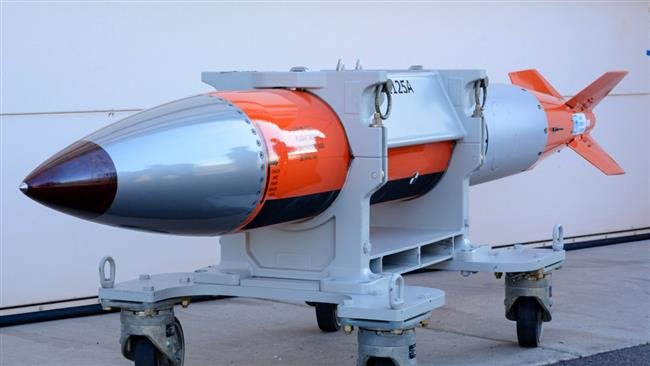 After declaring that the US would be withdrawing from the Intermediate-Range Nuclear Forces (INF) Treaty, President Donald Trump has just vowed that Wahington will build up its nuclear weapons in order to force Russia and China to “come to their senses”.

The most interesting thing is that Trump and his National Security Adviser John Bolton now claim that China violates the INF Treaty even despite the fact that it’s not part of it. So, the US administration has the “legal” right to do all what it wants.

In an interview with the Russian newspaper Kommersant, Bolton, who is now visiting Moscow, said that the US was planning to pull out of the INF Treaty because not only Moscow, but other countries, including China, Iran, and North Korea, were free to develop weapons prohibited under the pact.

“There is only one country in the world that is bound by the conditions of the document: the United States,” Bolton claimed adding that Russia allegedly violates it for years.

The INF treaty prohibits the US and Russia from possessing, producing, or deploying ground-launched ballistic and cruise missiles with a range of 500-5,500 km. It was originally was designed to de-escalate the situation between the US and Russia (then the USSR) in Europe. If Mr Bolton looks at the map, he will eventually find that North Korea and China are not located there.

However, in an interview with WSJ, Bolton found how to explain the US stance. He claimed that the fact that North Korea and China are not a part of the INF Treaty poses a threat to “potentially deployed American forces”.

“So, having an arms-control agreement that limits us on a global basis leaves many of our friends and allies around the world, and potentially deployed American forces, at considerable risk,” Mr. Bolton said. “And I think that’s something Russia should be concerned about from its own perspective, sharing, as it does, a border with China.”

Now it’s clear. Chinese missiles are posing a threat to Russia. So, the US is free to withdraw from the INF Treaty. It’s a bit complicated to expect a stabilization of the international situation while the US administration employs such policy.

Countries fielding rockets with thousands of kms range is the norm these days, while US relies on carrier task forces with limited range to project power, or inadequate ship to surface weapons. US needs to adapt to strategic changing realities, they need to,design weapons that work and are effective.

The US needs to be eradicated. I honestly think the powers that be are in melt down mode; they are dangerous, very dangerous.

Zo Fu
Reply to  You can call me Al

Those are empty words. Putin was unable even to answer to 2 cruise missile attacks in Syria. He didn’t attacked illegal US bases in Syria with Kalibr missiles, however it would be justified as retaliation for US attack. He is basically very weak leader, making deals with Netanyahu and not kicking Bolton to the nuts. Why is Bolton in Moscow by the way ? I’d make him persona non grata and strip him of diplomatic passport immediately after IMF treaty breaching. Those are the famous US “partners” Putin is talking about ? Shame on Putin-Lavrov and shame on Trump and all his deep-state-neocon administration.

The coalition forces attacked Syria, not Russia nor Russian installations in Syria, their response without firing a single missile and relying on EW defenses shows the flexible effective latitude Russia possesses during such provocations. Bolton is there to kiss Russian butt to work drop the hook in the water for some presumed alliance against China, and to clarify IMF issues. As far as Nethanyahoooo, he has been sidelined and if he wants anything he will have to kiss Russian butt.

Putin is weak/compromised leader. Russian Generals realize this and Hopefully They retain control when Putin steps down.

I’d wager Israel is totally screwed then! Russias First response to use of Nuclear weapons is goodbye Norfolk Naval Annex, West/East coast SSBN bases. NATO gets pummeled…..It’s sue for peace in 48 hours. It’s double doom if China reacts to USN and US theatre forces in the East.

USA is finished before lunchtime. Americans will be asking the 40 IQ Kurd at the Burger King drive thru, ….what the hell is happening : )

I think if their dollar Ponzi scheme is busted, and the dollar becomes useless, they will become a banana country.

so
Reply to  Jesus

Already are. Still waiting for affordable quality health care and livable wages. The economies great if your rich. If your not. Then the prison/workhouse for you.

First of all US needs to remove its forces from all over the world and start to actually do/produce something isntead of just forcing everyone to sell them their resources for dollar that they can simply print out. Russians removed their forces from Europe in 1990, when will US finally do the same?

That is part of the problem with their bloated defense budget that buys very little, a lot of the money is spent on overseas bases, salaries and benefits and the MIC that produces very little in regards to effective weapons. The US MIC has not produced any meaningful weapon system s for the last 3 decades, they have a lot of computer geeks that have very little common sense in regards to weapons.

Selling resources and tangible goods for printed paper has been the goal of the US as they established the petrodollar as a reserve currency, alowing them to live beyond their means for decades. As countries are beginning to sidestep the dollar in favor of local currencies or other bartering systems, US will feel the pinch and start the slow withdrawal from Europe, Asia, Africa…etc. Financial realities destroy every empire.

It is about deploying mid range ballistic missiles capable to carry nuclear warhead to Poland, Romania and Ukraine to destroy Moscow, St. Petersburg and static ICBMs installations, which are mainly located in West part of Russia, perfectly in reach of medium range missiles fired from Ukraine, Poland and Romania.

I’m for 4th time urging South Front to give us relevant and thorough analysis of the problem instead of shouting some propaganda biased partly-true and partly-hoax wannabe analysis.

I’m afraid 99% of people are not aware how is the situation serious. Because we are in grave danger of nuclear escalation once those missiles are deployed.

What medium range ballistic missiles does US have that are operational?

LOL, as I posted before, USA tested 2500 km range missile 3 years ago on Hawaii and test was successful, that’s why IMF is destroyed by US now. And you know what ? Learn yourselves and don’t ask silly questions or you’ll look like that dumb journalist on youtube:

Remember – NATO anti ballistic shield is not pointed on Russia, it is pointed at Iran – 2013

Who cares what they tested 3 years ago, they test a lot of things, I asked you concisely what MRBMs does US have that are operational today?

You are the idiot, instead of spewing BS, learn the fact that US does not have any operational MRBMs in its arsenal, the only weapon they have in Europe is the ground based air launched cruise missile …Tomahawk, and we know what the Tomahawk is capable of. If US wants an operational MRBM they can go back and study the Pershing they deployed in Europe in the 80’s or they can hybridize a Minutemen rocket, or do something totally new. By the time they deploy these weapons that fly on ballistic trajectories Russia will have the S500 readily deployed along with the s400. Russia already has ground launched cruise missiles with a 5000kms range, along with off the shelf ballistic missile Rubezh, which is a modified Yars rocket.

The navy’s Standard missiles 3-6 could be converted to nukes in a heartbeat. Technically, there isn’t anything that could be thrown into the gap in 6 months, but afterwards. who knows what these desperate clowns will nail together?

Actually I did my homework (I’d glad if South Front would be able to do their homework as well) and found this 2016 video on Youtube. Putin precisely predicted INF cancellation and explained reasons behind it.

I don not consider the Standard 3 platform a MRBM, it is an anti ballistic weapon. It is supposed to have a non explosive warhead, I am not sure if they can package a nuclear weapon instead. The Standard 6 supposed to be a band aid for a lack of true anti ship missiles has minimal range to be of any relevance.

Paraphrasing: “No relevant payload for sm3.”

The smallest nuke is less than 10 kg. The Pentagon has been talking up mini-nukes for several years now.

Get real, that is what they said about superfuse w76 warhead, Standard 3 is not a penetrator, it is a missile intended to intercept ballistic missiles. US needs to go to the drawing board and develop a true IRBM and then they can place any payloads they desire to. In case you think these low yields penetrating warheads will be delivered by aircraft against effective IADS …..you can keep dreaming.

The USSA did this on orders from its master Israel because Russia gave the S-300 to Syria. Russia can easily retaliate as the treaty was to the advantage of the USSA and its slave master Israel. “Russian naval ships with nuclear tipped cruise missiles on board could anchor in the countries like Venezuela or Nicaragua on a rotational basis. Long range aviation bombers could use air bases there too.” Russia must threaten the continental USA and its slave master Israel. Russia should also put such missiles in Syria etc. aimed at Israhell with massive 100 megaton warheads like the Russian nuclear torpedo then there will be instant peace.

Given that there are only two signatory’s to the INF Treaty, Russia and US, then Trumps withdrawal effectively frees Russia from its obligation under the same Treaty.