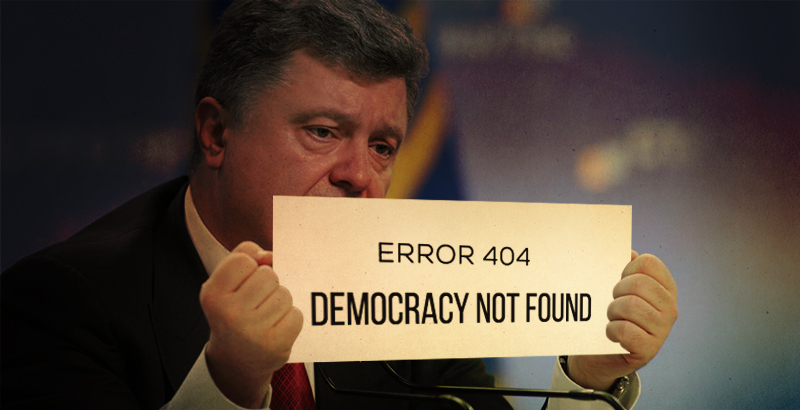 Ukraine’s President Petro Poroshenko believes that the Dutch referendum on the agreement between Ukraine and the EU was “an attack on the unity of Europe and an attack on the expansion of European values.”  Poroshenko told this reporters in Tokyo on April 7.

“The referendum in the Netherlands was strictly in an advisory nature. We will continue our movement towards the European Union,” he added in Twitter.

Now, according to Poroshenko, now, it’s “for the government, parliament and Dutch politicians to decide”.

Ukraine’s Foreign Minister Pavlo Klimkin supported Poroshenko saying that “nothing had changed” and the agreement would be implemented mentioning that the “European integration of Ukraine cannot be stopped.”

In other words, Ukraine’s authorities recommends the Dutch government to ingore the decision of the Dutch citizens. It looks like Ukrainian officials believe the democracy and “european values” aren’t needed if they don’t help “Ukrainian democrats” to pursue own goals.

We remember, the majority of Dutch people (61%) who went to the polls in the Netherlands on April 6 to express their opinion on the proposed association agreement between the EU and Kiev have rejected it.

…will say NO, to bankrupt and corrupt Ukraine, (=USA puppet), which should be prosecuted for crimes against humanity, since their army cowardly killed thousands of civilians, old, women and children in the east.

…will say NO, to terrorist Turkey, (=USA puppet), which should also be prosecuted for crimes against humanity, since their army is cowardly killing thousands of civilians, old, women and children in Kurdistan and are also guilty of genocides of Armenians, Greeks and other ancient local populations and of the invasion of Cyprus in 1974.

…will say NO, to NATO (=USA) which should also be prosecuted for crimes against humanity, since their army cowardly killed civilians, old, women and children in Yugoslavia.

…will say YES, to Russia, the only free and independent European country, and world superpower, which upholds principles and International Law.

This guy Porky should be wasted.