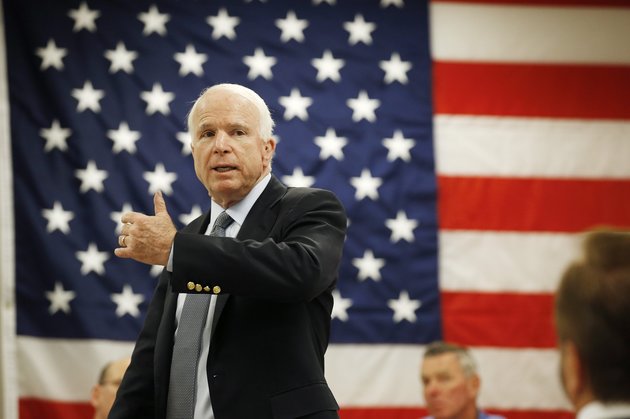 Incumbent Ukrainian President Petro Poroshenko may have found a super weapon to defeat his main political opponent, comic Volodimir Zelensky, in the second round of the presidential election, which is set to be held later in April.

Mr Poroshenko is going to rename a street in the capital of Kiev after John McCain. Poroshenko announced his plan after meeting with McCain’s widow, Cindy, over the weekend.

Poreshenko described McCain as “a great friend and advocate of Ukraine”. He emphasized the “historic importance of Senator McCain’s heritage in establishing and building a new independent Ukraine.”

Kudrya was a wartime hero who led the Kiev resistance against the Nazis during World War II. As a Soviet intelligence officer, Kudrya sabotaged Nazi infrastructure and assassinated German soldiers, until he was caught, tortured, and killed by the Gestapo in 1942.

However, for the modern Ukrainian government, McCain, who used to be a long-time supporter of the 2014 coup and lobbist of weapon deliveries to Ukraine, is apparently a more important historic person.

The U.S. Government’s Frauds About Taiwan

…and that’s why Poroshenko deserves to lose.

Yes, and when I saw this article, I seriously thought it was an April Fools Day joke… But it has been published today being the day after!

of course two traitors to their motherlands, must support each other.

He is having a hard time making up his mind in naming the street after McCain, Rothschild, Soros, or perhaps Trump.

You can call me Al
Reply to  Fred

Have they managed to bury no name yet?

FYI….. This is what is breaking in US about the Ukraine connection. It is a little more riveting than a street being named.

Indeed it has been.

I am becoming fond of the comedian that is running in the Ukrainian election. I hope that he wins! :-)

I don’t know what the problem is folks, i think he truly deserved it! A Street in the capital of a failed state, given to him by a corrupt oligarch, war criminal and hypocrite.. I think it fits! ;)

I renamed my septic tank to the John McCain repository.

Had a special turd named in his honor.

Most certainly. I think this is just one-ups-manship, spurred on by jealousy.