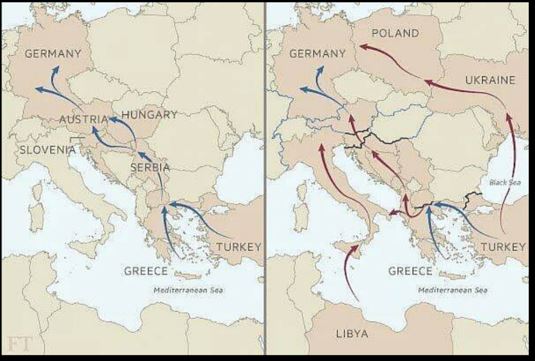 Poroshenko’s recent visit to Ankara, which took place against the backdrop of a major political crisis in Kiev which is revolving around Poroshenko’s efforts to oust the hapless Prime Minister Arseniy “Yats is the Man” Yatsenyuk in order to reapportion Ukraine’s rapidly shrinking economic pie to his own cronies, clearly must have dealt with matters important enough to warrant his absence from Kiev at a time like this.

The official news releases and subsequent reporting do shed a fair amount of light on what the two leaders have discussed, and for the most part the most important theme was money. Thus Poroshenko appears to have made some pretty attractive offers to Erdogan concerning the privatization of Ukraine’s coal mines, including ones located in Novorossia where Ukraine’s laws no longer reach. There was also some discussion of the status of Crimea, with the two sides expressing interest in raising the peninsula’s profile in a variety of international organizations. There was even considerable chatter in Ukraine’s media and social media concerning Ukraine officially ceding (!) Crimea to Turkey for an unspecified sum of money. All in all, Poroshenko appears interested in drawing Erdogan into Ukraine’s internal politics and the Ukraine–Russia relationship by giving him a financial stake in the outcome of the conflict. For its part, Turkish leaders announced they are willing to invest in Ukraine and increase the level of bilateral trade.

Which raises the question: what exactly are the two countries going to trade? Here, the two leaders have a remarkable self-interest overlap. Both of them have extensive ties to organized crime in their countries and profit enormously from a variety of smuggling activities and from control over trade routes.

Thus Erdogan, his family, and his political inner circle benefited from ISIS oil smuggling and the refugee smuggling to Europe. Poroshenko and his clan benefit from smuggling activities into the EU, particularly after the appointment of Gennadiy Moskal to the post of the local governor, where he was sent after establishing Poroshenko’s control over smuggling in the Novorossia area. More recently, Poroshenko’s “activists” have been trying to extract revenue from a variety of transit blockades, first around the border with Crimea, and more recently in Transcarpathia. But these business models are beginning to fail, in both cases due to Russia’s actions, though EU’s own policies have also damaged the illicit operations’ profitability. Russia-led destruction of ISIS and the interdiction of oil smuggling routes, combined with diverting Russian cargo traffic flows away from Ukraine, has hit the two mafia kingpins’ pocket books pretty hard. EU’s closing of borders to migrants coming through the Balkans is also having a financial effect.

Therefore it might be tempting for the two leaders to collaborate on opening a new “trade route” of sorts, one that would funnel Middle East refugees into Ukraine for further “distribution” into other parts of the continent. The scheme has much to recommend it. It would increase pressure on both Russia and EU, since the refugees could now enter Poland, Romania, Belarus, and Russia following their entry into Ukraine. It would increase the profits of smugglers in Turkey as well as Ukraine, ultimately lining Erdogan’s and Poroshenko’s pockets. And it would give both leaders the ability to once again turn to the EU and demand billions of Euros, as well as visa-free travel regime with the EU, in return for their promise to “deal” with the refugee crisis. Erdogan has already demonstrated that the EU is very easily blackmailed and has almost no ability to exercise “hard power” against Turkey or Ukraine, for that matter. There is no reason to expect Erdogan will abide by whatever terms he has reached with the EU, and there is every reason to expect Poroshenko to try to learn from Erdogan’s example and collude with him on refugee smuggling.

The logistics of the new route remain unclear, but they could be resolved, ironically, with the money provided by the EU to help the refugees!  The most plausible scenario, and one least likely to provoke naval interdiction efforts, would include Poroshenko offering to house some of the Middle Eastern refugees. Once in Ukraine, they would be set free (after paying a small “handling fee” to whichever Poroshenko-linked neo-Nazi organization will be empowered to deal with the new arrivals) and pointed in the general direction of Ukraine’s closest international border.  The fact that Ukrainian navy ships are already coursing between Odessa and Istanbul, ostensibly to ferry $800 million worth of Turkish non-lethal military aid to the UAF, suggests that the logistical route is already being paved.

The Poles will block the border and Russia will too.Merkel is just one inch away from getting ousted.

Time and again the point is proven that Govs and Politicians have an easy job when everything is OK. They collect taxes to increase their benefits and wages, drive the Police against anybody that complain, obey USA against people wishes… Easy!

Now the going got tough, their inadequacies showed up. France, UK, Scandinavian, Germany have useless and traitors in government.

Only Putin and his gov appear to be serious and credible enough to uphold basic principles that the western so called democracies have thrown to the dogs.