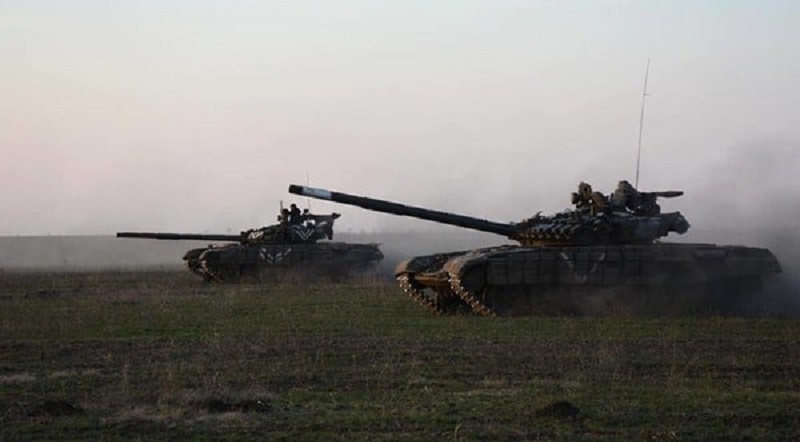 Battle tanks near the village of Avdeevka, located south of Donetsk

Ukrainian President Petro Poroshenko has cut a working visit to Germany amid the increased fighting between pro-Kiev forces and local militias in the region of Donbass in eastern Ukraine.

Heavy clashes and artillery duels in the area have been reported since January 28, inflicting casualties on the warring sides and to the infrastructure in the areas south and southeast of Donetsk, a capital of of the Donetsk People’s Republic (DPR).

A spokesman for the Ukrainian President said that the situation around the Kiev-controlled settlement of Avdeevka “an emergency situation verging on a humanitarian disaster,” ignoring that a large scale-attak on DPR forces launched by the Ukrainian Armed Forces and pro-Kiev paramilitary groups was launched from this direction.

Poroshenko’s working visit to Germany was clearly synchronized with the advance of pro-Kiev forces in Donbass. Thus, the only reason of the move was to come in focus of the mainstream media and to blame DPR forces and Russia for an alleged violation of the international agreements.

The Poroshenko regime urgently needs to attract attention of foreign players to itself and to get their assistance amid the ongoing political and economical crisis in Ukraine.

Considering that, the Kiev regime has repeatedly show that it’s ready to violate any international, humanitarian and moral norms to achieve own political goals, there are little doubts that the observed escalation was a planned act.

The crisis can end fast ,but Putin and co doesnt want this.They want the sanctions to be lifted