The Iraqi Popular Mobilization Units (PMU) continued advancing towards the ISIS-held twon of Baaj near the border with Syria. According to the PMU media wing, PMU fighters have recently liberated the villages of Arfee’ al-Awal and al-Wahbi.

Earlier this week, the PMU officially announced the start of the Operation Sinjar Martyrs with an aim to take control over Baaj.

If the PMU liberates Baaj and gets this foothold for an advance in the Syrian-Iraqi border area, the group will be able to influence significantly the ongoing developments in Syria. The US-led coalition and US-backed forces operating in Syria are aiming to build a buffer zone at the Syrian-Iraqi border with an aim to prevent any cooperation between the PMU and the Syrian military. 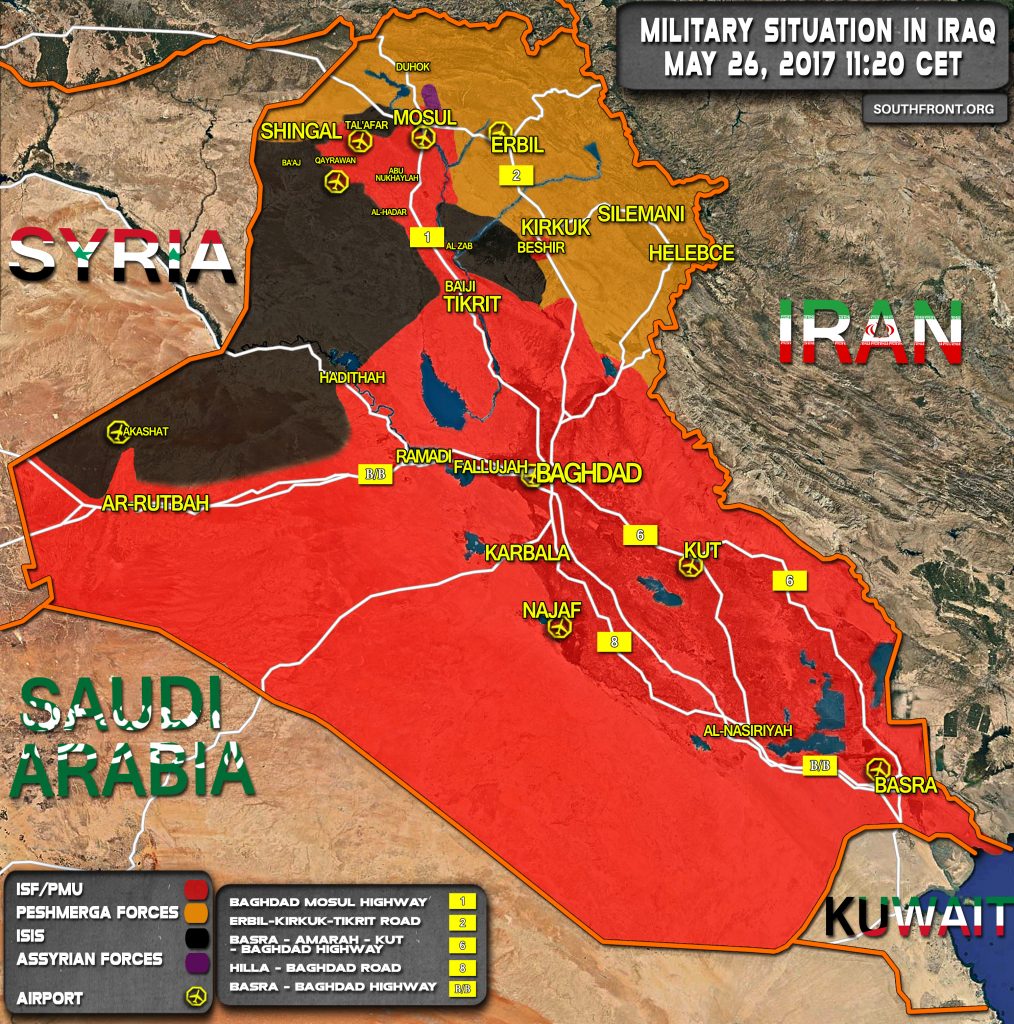 There is no reason for them to attack them right now. The priority lies with reaching the border with Syria so they can link up with the SAA at Deir ez zor. If they achieve this succesfully, the US-operation to divide Syria will receive a major blow, that they possibly will not recover from. In fact, they might have achieved the opposite because Syria, Irak and Iran will create a political and military union which will be a nightmare for the West and Israel.

And Lebanon. The Shia Crescent will be completely linked, and the Neocon/Saudi/Israeli goal of a war with Iran will have been completely (or almost) averted because of these events and the Iran deal.

Good question. I foresee the PMU crossing the border (on invitation of the Syrian government) and advancing to Dier Izzor, since the SAA advance would take time to reach the city. Then on instigation by its US/ EU allies, the Kurdish forces might advance to seal the Syrian / Iraqi border (a plausible move.) This is all a chess game.

The Kurds are already over their southern territorial limit at Raqqa , and have only gone beyond because of the weapons the US has offered them by doing so . They are not religious fanatics that can easily be manipulated , and they are Syrian . Very doubtful the Americans could entice them south to Deir Ezzor . As you say , PMU will try to help the SAA along the Iraq – Syrian border , and hopefully help with the cleansing of ISIS between the border and Deir Ezzor . The Kurds and the Syrian government will work things out , they have too many common interests not to .

And what is your opinion of the idea of a state of Kurdistan state? Wouldn’t such an idea be enticing if there were powerful backers willing to make it a reality? This despite being a common people who have long been divided along national and political lines.

A Kurdish state , “Kurdistan” , or any name you may wish to give it , is I am sure , enticing to the Kurdish people . And that “enticement” is exactly the carrot the “powerful backers willing to make it a reality” (the US) , are trying to use in their divide and conquer quest to crush the Syrian nation . Problem with these powerful backers , is they have lost all honor on their word , and will change “policy” and direction in a heartbeat . Their only “law” is what is in their “interest “. They did it in Iraq , and they will do it in Syria . Their unwavering goal is the destruction of Syria , in order to be sure of a victory over Iran . They do not care how many jihadists , Kurdish , Iraqi’s or Syrians die in order to achieve this goal . The Kurdish people have suffered enough , they deserve better than to be used as pawns in Americas geo-political games . Their wisest move would be to align with Syria , and achieve peace .

and what will happen, if the americans offer them independent state?