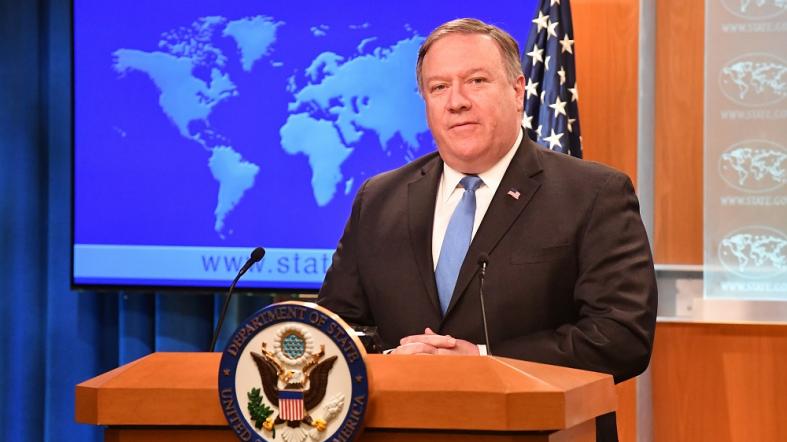 The situation in the Islamic Republic of Iran has stabilized, following a series of economic protests caused by an increase in fuel prices. The US attempted to fuel the crisis from outside instigating riots via media and diplomatic channels. Top US politicians and officials declared their support to “the Iranian people”. Iran says that foreign intelligence agencies also tried to exploit the protests.

Secretary of State Mike Pompeo is spearheading the propaganda campaign against Iran.

Immediately when the protests began Pompeo tweeted that the US was “with the people,” but didn’t forget to remind the list of demands to the Iranian government for the US to actually start helping the Iranian people, or at least stop heavily sanctioning them.

It is no secret that the reason behind the protests is, in fact, the “maximum pressure campaign” Washington is employing against Tehran.

Shortly thereafter, he made a call to all Iranian people to send the US “photos, and information documenting the regime’s crackdown on protestors.”

I have asked the Iranian protestors to send us their videos, photos, and information documenting the regime’s crackdown on protestors. The U.S. will expose and sanction the abuses. https://t.co/korr5p0woA

On November 26th, Mike Pompeo gave a press briefing in which he further expressed US support for the Iranian people, while the protests had already subsided.

“I had talked about the 20,000 messages we’ve received, which we believe all came from the Islamic Republic of Iran,” the secretary said. “We expect we’ll get thousands and thousands more over the coming days as well. There is the capacity for Iranians to communicate outside of the country.”

He reminded that while the protests lasted, the Iranian government had carried out an, almost entire, shutdown of communications, with internet connectivity being less than 5% of normal values during some days, according to NetBlocks.Org.

“Last week the regime shut down the internet to prevent the truth about the protests from getting out. I asked Iranians to share their message with the United States so they could expose and sanction the abuses of the Iranian regime,” Pompeo said.

Using the shutdown as a pretext, on November 22nd, the US Treasury Department announced sanctions on Mohammad Javad Azari Jahromi, Iran’s Minister of Information and Communications Technology.

It should be ‘quite impressive’ that the US State Department received 20,000 messages from Iran, which has the population of over 80 million. The number of messages was also likely inflated, since this wouldn’t be the first time the US overestimates other’s actions to “beef up” its own image.

It is more than apparent that the Iranian people are fully aware that the US is not their friend and Pompeo and Co.’s propaganda has little to no effect on them.

Even given the benefit of the doubt, and State Department really has received upwards of 20,000 messages, how many of them contain valid information, and are not a simple one-line message of “thank you” or “go away”. And how many unique users sent the messages? As it is also quite likely that a politically “active” and “passionate” individual would possibly send dozens of emails and not simply stop after a single one.

How many of them were sent by people (including US citizens), who do not even live in the Islamic Republic?

As part of the same press briefing, Mike Pompeo spoke of the recent death of Masoud Molavi.

Molavi was a former contractor of Iran’s Ministry of Defense and according to Pompeo was a “dissident” and the “Iranian regime” assassinated him. According to media reports, Molavi “defected” to Turkey and started the “Black Box” Telegram channel, quite vocal in anti-Iran rhetoric. The channel predominantly published corruption allegations against members of the government, judiciary and intelligence services, and claimed to have contacts within the Revolutionary Guards.

Molavi was shot repeatedly on the street by a man who ran by him in the Sisli district of Istanbul on November 14th. The video below shows security camera footage of the shooting.

As per Mike Pompeo, Iran’s “cruelty isn’t contained by borders,” and Molavi’s death was “yet another example in a long string of Iran-backed assassination plots outside of Iran.”

The Iranian regime’s cruelty isn’t contained by borders. Last week, an Iranian dissident, Masoud Molavi, was assassinated in Istanbul after defecting to Turkey. His killing is yet another example in a long string of Iran-backed assassination plots outside of Iran. pic.twitter.com/vsATNzE8jT

When Iranian Foreign Ministry spokesperson Abbas Musevi was asked of Molavi’s death the response was that he was an Iranian citizen and that the Iranian side expected a report from Turkish authorities about what had happened.

Molavi was an expert in the field of Artificial Intelligence and it makes little sense for Iran to “assassinate” him, especially in a moment such as this.

The country was struggling with protests, and despite that the “evil Iranian regime” decides to “assassinate a dissident” in an extremely clumsy and public way.

Specifically, just to give the US more reasons to exercise pressure on Iran and fill MSM with even more propaganda than previously. If Molavi was such an important asset, why was he not protected, hidden or anything of the sort? He openly and freely roamed around and did as he wished.

Mike Pompeo may be right and Iran could have allegedly “assassinated” Massoud Molavi, but what would the purpose of it be? Did Iran’s government suddenly decide that it wasn’t having a hard-enough time with the current Washington-led pressure on it and needed to ramp up the difficulty of its situation?

Pompeo makes a wide range of declarations and accusations like the State Department does have a moral authority to lecture other coutnries on human rights, democracy in freedom. In fact, Pompeo is the former director of the CIA, an organization proven to be responsible for numerous murders, in various manners. The CIA has been involved in drug trafficking, support of terrorism, torture, meddling in the domestic affairs of almost every country in the world and more.