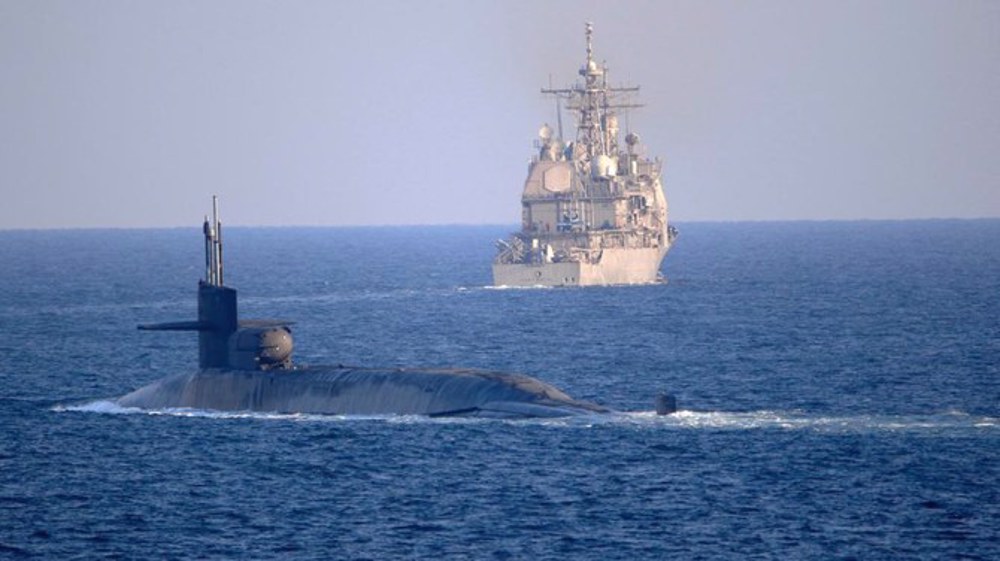 The USS Georgia nuclear submarine was accompanied by one of the two guided-missile destroyers as it passed through the Strait of Hormuz.

On January 10th, US Secretary of State Mike Pompeo said that the Department of State would notify Congress on the intent to designate Yemen’s Ansar Allah movement (the Houthis), as a foreign terrorist organization.

This is yet another attempt by the Trump administration to guarantee that its maximum pressure campaign against Iran continue.

This could potentially throw a wrench Biden’s promised efforts to restart diplomacy with Iran and to reassess the US alliance with Saudi Arabia, which has been leading an intervention in Yemen and frequently killing civilians for years now.

“The designations are intended to hold Ansar Allah accountable for its terrorist acts, including cross-border attacks threatening civilian populations, infrastructure and commercial shipping,” Pompeo said in a statement late Sunday, using the official name of the Houthi movement.

The Houthis have “led a brutal campaign that has killed many people, continues to destabilize the region and denies Yemenis a peaceful solution to the conflict in their country,” he added.

He specifically mentioned a December 30th attack on an airport in Yemen’s second city Aden, which killed 26 people and was blamed by the Saudi-backed government on the Houthis.

The Houthis denied the attack, and everything actually pointed to the Southern Transitional Council, which is allied to the UAE, which is a part of the Saudi-led coalition. Meaning the attack was simply part of internal strife under Riyadh’s lackluster control.

Meanwhile, Iran continues its threats in response to any actions or claims by the US or Israel, refusing to cave in to any pressure attempts.

The commander of the Islamic Revolution Guards Corps (IRGC)’s Navy says Iran is in full control of the Persian Gulf region and monitors all movements by extraregional forces that are present in these waters.

“Today, we have full control over the Persian Gulf and dominate the entire waters. The permanent presence of the Basij force has provided us with adequate manpower to have complete control of the region. At the same time, we monitor all developments using electronic and electro-optic systems,” Rear Admiral Alireza Tangsiri made the remarks in a televised interview released on January 10th.

“The Persian Gulf is full security,” he said, stressing that only extraregional powers coming from far away to the Persian Gulf would potentially intend to cause insecurity there.

Tthe IRGC Navy commander added that deterrence in the face of hostile forces cannot be achieved through mere political means, but it can only be achieved “if your power exceeds that of your enemy.”

“This [superior military power] will cause your enemy to step back. So, don’t think that we can make the enemy withdraw through mere political means,” Tangsiri emphasized.

Commenting on acts of provocation by hostile forces in the Persian Gulf, he said the Americans’ Persian Gulf strategy has failed, adding:

“We have barred the enemy from implementing its strategy and this is why the Persian Gulf is secure.”

Trump is in his las 9 days in office, banned from social media, and there are still concerns for a “farewell strike” on Iran, in order to fully impede any hope for US President-elect Joe Biden to attempt and salvage the situation.

Old news. Neo-colonialists are the “good guys” and all others who refuse to bend over are the bad guys that must be punished… The thing is, nobody in the free world cares much, what US thinks any more. US hubris is US straight jacket imprisonment, that needs only isolation of padded cell.

“The thing is, nobody in the free world cares much, what US thinks any more.” Tell that to the puppet governments and their dumb population (ie.the overwhelming majority of the “free world”)

I didn’t say that at all. You misinterpret my comment completely… You are putting your words into my mouth (instead of reading and trying to understand and only than commenting) Free world are only Russia, China and all other countries who are in alliance with them ( thus having freedom through them) Western puppet regimes-governments belong to the “good guys” (that US never punishes) not to the free world .

Yea ok,we have a different understanding of the term “free world”which I don’t agree on but ok.

Free world is Nord Korea and China and Russia are just cheap copies.

The thing they fought for now goes against them,more proof god can give or take right back!

As a diplomat, Pompeo had all the sophistication of a coffin.

Frankly, that is a good description, an oversized coffin though.

Puting things mildly his curse paved the way for far many more americans to lose their lifes than russians,now if that ain’t a loser what is? cia are finished! The whole world has had enough of it!

With any luck he will go the same way as this clown.https://youtu.be/4zpYQJkBQp0?t=51

Frankly, the US is a fucked lunatic and impotent. As if.

Once we render this fatass oil prices will plummet for decades!

It could be a move to allow Turkey to infiltrate in Yemen, as they did in Syria and make KSA spend even more on arms.

With the recent Houthi setback in its latest battle with the Saudis its possible the US is already helping the Saudis in preparation for ZioAmerica’s official entry into the conflict. I hope nobody believed that the Houthis would be allowed to succeed so easily. Additionally, eliminating the Houthis would knock out an Iranian ally and secure Saudi Arabia’s southern flank.

I think it is better for arms industry to keep Gulf states spending, USA is slowly retreating from the region because the oil from there is less interesting than 20 years ago. Also Houthis can’t actually win, like conquering Meca or something. One of the main problems of US army is that their toys are extremely expensive and a war against Houthis would mean spending few million dollars for each sandal wanker.

However, I believe there are other factors at work here besides money. https://www.jpost.com/opinion/israel-arab-normalization-to-have-impact-on-yemen-war-opinion-654858

Thanks I have read it all. I can only speculate. NATO, Israel and Arab League imposed a blocade on sea against the Houthis. And Houthis still get arms from Iran, there is only a way left, KSA is so corrupt that the arms go dirrectly through their country into Houthis hands. It wouldn’t be the first case in the world. Second, if KSA breaks appart and diferent factions wage war against eachother, that wouldn’t be that bad for Israel, it would keep Iran busy and force USA and Turkey to invest in that conflict, against Iran. But could be totally the other way around :)

Jewpost. No need to read, all warped propaganda.

ZioAmerica has no hope against the Houthi if they cannot even make headway against the Taliban.

If you want to see the empire fall quickly, then wait for it to engage the Houthi on their own ground.

Watch US marines get shipped home in body bags by the thousands.

Whale oil will make a comeback.

Let’s face it, the fat Pimpeo is a global laughing stock and the Americunt losers have been barking against Iran for over 40 years now and achieved fuckall and ridicule. They have “sanctioned” literally half the world and people just laugh at the idiocy. The Ansarallah would really care because their next shopping trip to Paris is now blocked and no more Pierre Cardin sandals and designer Khat. Dumbarse Americunt morons.

Iraq Militias Celebrate US Sanctions: ‘Our Leaders Are Terrifying America’

“We congratulate the friend of the martyrs, Popular Mobilization Committee Chairman Falih al-Fayyadh, on his inclusion with the honorable ones whom the U.S. administration considers enemies,” the spokesperson said in a statement sent to US besieged embassy in Baghdad.

This source is reporting that President Trump has signed the Insurrection Act implementation.

If this is indeed the case. Trump may be the US President for the next four years.

I agree with most of his domestic policies. And most of his stated foreign policy objectives. Which unfortunately are at odds with his pro Jew, pro Israel, anti America First foreign policy activities. Whether his second term in office. If it happens. Will gravitate away from Israel first and the Jew World Order. And towards America First and a pro human future. Remains to be seen.

Trump is just a fecal stain of history now. The 4 year circus is over. There will be no insurrection or anything. American sheeple are a compliant herd.

Check back with an update in a couple of weeks.

Trump might be heading to play golf in Scotland though for the remainder of this term.

This is truly a popcorn moment as never seen before in all our lifetimes. :)

He doesn’t even know the laws he supposed to be protecting. Silly little man. People can not be labeled terrorists. Something which even American allies recognize – like Japanese stance about Hamas or EU decisions about Hezbollah and Hamas (in EU these are on hold, never ratified BTW).

Imagine the gall of an overfed American satanist calling anyone a terrorist. Are there no metamophorical mirrors in that decrepit, crumbling cesspit….a little bit of self reflection wouldn’t go amiss.

We knew how the asshole would end up from when he was a kid,who gives a rats arse what he thinks?

If in the West there was a minimum of civilization the fat and bigoted boy would have been executed, instead he is free to shoot his bullshit while the Yemeni children literally die of hunger because of him.

Biden calls capitol protesters “Domestic Terrorists” and in the same time Pompeo designates Houthis as “Terrorists”. US are seeing nothing but the “Terrorists” around them….

While both fail to notice nor acknowledge the acts of their Saudi allies. Their judgement is clouded.

This works to the benefit of Iran.

It guarantees the USA will never be able to *negotiate* with the Houthi and convince them to turn against Iranian interests.

In fact, this creates a permanent enmity between the US and Ansar Allah that will prevent any kind of future deals between the two.