The statement was made during Pompeo’s interview With Bret Baier of Fox News on April 8.

“QUESTION: The head of the IRGC, this man Qasem Soleimani, is by all accounts a bad character and has led all kinds of attacks. But are you saying that he now is equated to, let’s say, the head of ISIS, al-Baghdadi, in U.S. policy perspective?

SECRETARY POMPEO: Yeah. He is a terrorist.

QUESTION: So we as a country have a policy to target him or capture him?

SECRETARY POMPEO: Qasem Soleimani has the blood of Americans on his hands, Bret, as does the force that he leads, and America is determined. Each time we find an organization, institution, or an individual that has taken the lives of Americans, it is our responsibility – it’s indeed President Trump’s duty, and we have made tremendous progress in this administration’s first two years – to reduce the risk that any American will be killed by Qasem Soleimani and his merry band of brothers ever again.”

An interesting fact that besides the comparison of Soleimani and al-Baghdadi, Popmeo did not bother himself to note an obvious factual mistake made by the interviewer. Soleimani is not the head of the IRGC. The IRGC is headed by Maj. Gen. Mohammad Ali Jafari. Maj. Gen. Soleimani is the head of the IRGC’s Quds Force, a special unit designed to carry out unconventional warfare and intelligence activities and responsible for extraterritorial operations.

In the same interview, Pompeo denied that the move to designate the IRGC a terrorist group was linked to the Israeli election despite it came just a few days ahead of it and Israeli Prime Minister Benjamin Netanyahu publicly claimed that the move was made upon his request.

Pompeo’s interview is just another example of the current policy of the Trump adminsitration towards Iran and confirms that the US has consciously chosen an escalation scenario in relations with the Islamic Republic.

A laughably stupid move that will not protect anybody, only kill more. They need to grow up and fast. My take. I wish well to all.

fatso is making it imminently clear he’s a first rate idiot that you can’t really take serious – except that it allows the ever evil squatters to take pot shot at him. fatso is part of a criminally insane and to the core corrupt junta in washington dc, a junta which has let go of all pretense to work for the american people, just a deep state tool that does what he is told – talk about betraying the trust of the american people while his pockets will be lined to the brim once he’s out of office. but truth is – he’s rotten to the core!

wish someone would put up a 25million bucks reward on fatso’s head, dead or alive cause that is what I think is the price the morons have put on baghdadi’s head, so tit for tat. anyone with 25 million bucks to spare!

I dont like soleimani in any way (because to me he is sectarian) and (only really fights Sunnis) and (never america).

But with that said, lets ratchet up the war against america, and keep hacking at the tree of evil, like Sheik Osama Bin Laden(rh) so rightly recommended as a strategy.

Its time for Turkey and Iran to stop wussing and use their resources against the enemy, (nato) and (not Sunnis or Shias).

assad needs to go back to being a doctor, because 99% of his bombs have killed Muslims and many in hospitals ironically. Yes isis were bad, but that doesnt mean we let nato and zionist backed kurds take their place.

And what do you suggest be done with the Salafist head-chopping al Qaeda / al Nusra / Nusra Front and their associates in Idlib, Hama & West & North Aleppo? Allow them to fester? They need to be exterminated like you do weeds; with weed killer. Meanwhile, Kurds are neither united nor one hegemony and pennies are dropping in the minds of many that they are no more than US Pawns in the “Great Game” being played with France & UK & Israel & Russia & Turkey ….. and Iran.

So you support obama then, ic (you are another pawn to the west peddling sectarianism due to Islamaphobia).

Have you lost your mind? It is the primarily Sunni Syrian Arab Army that will exterminate the Salafist head-chopping vermin of al Qaeda/ al Nusra / Nusra front and their associates in Idlib, Hama & West & North Aleppo. Nothing to do with Obama but everything to do with Syria and its multi-cultural and multi-religious society. Terrorists are Terrorists no matter what religion they claim.

The proportion of Sunni support in Syria is disproportionate outside of Syria, even after factoring out the nato allied saudi coalition traitors.

And secular support outside of Syria is disproportionate to the level of secularism in Syria.

And finally the forces against Rebels is disproportionate to their intentions and Principles, which are both morally and religiously better than western, eastern, secular or even assadist principles.

Whatever ……. Syria will thrive and it will remain a multi-religious democracy despite the best efforts of the criminal US-UK-France-Saudi-Israeli-Turk-Qatari-Emirati coalition that attacked Syria and its people.

I side with Turkey and Qatar as Sunnis and Iran as Shia and Im ok with Secularism so long as its run by a Muslim leader that is accepted by Muslims Worldwide.

And yes, whatever tf you represent in Syria I dont gaf either. You could be a phaggot screaming for ghey rights in Syria for all I care.

no one voluntered to put up an award for 25 million bucks on fatso’s head,dead or alive in the darkest corners of ICC’s arrest in den haag – pity pity. something of that order would help clean out one of the worst war criminals walking around today.

“SECRETARY POMPEO: Qasem Soleimani has the blood of Americans on his hands”

Being a Zionist former CIA director he should know all about the anti American Zionist swamp traitors who have American blood on their hands.

Terrorists with American blood on their hands.
http://i0.wp.com/www.jewishpress.com/wp-content/uploads/2015/02/giuliani-begin-and-bibi.jpg?fit=477%2C318

I dont understand how any normal person can live in this CIA environment of obvious childish lies.

You spew them all of the time. 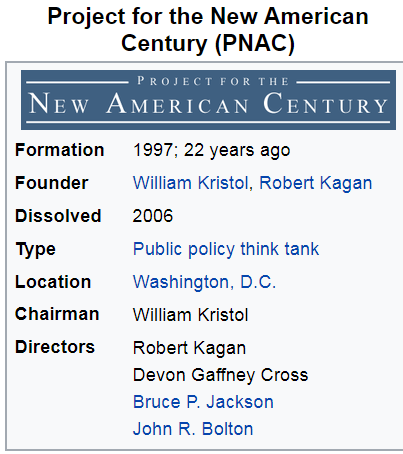 “The 9-11 event advanced the Neocon PNAC agenda, with its explicitly stated need for “…a catastrophic and catalysing event – like a new Pearl Harbor” [1] in order to mobilise US public opinion for already planned wars, the effects of which would be to destroy Israel’s enemies.””

it’s a creepy world moronistan is responsible to have founded. on the one hand, in washington dc, is a criminally insane and entirely corrupt junta with the chief proponents being fatso, bolton, abram, donny the dunce and some other types (the junta in most respects resembling Hitler’s gang of four – goehring, himmler, goebbels and heydrich) issuing FATWAS (sanctions, bounties etc) like there is no tomorrow.

and on the other, there is a small country,the squatters (whose legitimacy is highly doubtful) which has taken every leaf out of hitler’s notebook and with impunity is operating a DEPALESTINATION-program (a palestinenfrei palestine), is operating a LEBENSRAUM-program (west bank land theft) and is operating CONCENTRATION CAMP GAZA where the ethnic cleansing program is in full swing.

Really neo-zio-con I mean really you are going that low, don’t worry you are in Trumps hands soon or later you will be changed! Your words are barking dog. Meaningless you can bark all day and eat your shit.