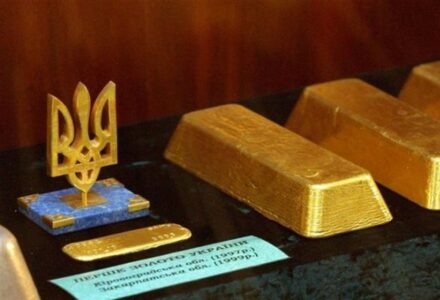 The plunder of Ukraine has been going on for over 3 decades now. Since the unfortunate events of the late 1980s and early 1990s, the country has been the target of various entities from the political West. The economy, scientific potential, natural resources and the people of Ukraine themselves have been subjected to one of the worst cases of exploitation in recent history. The economy has been plundered by the corrupt oligarchs, while the country experienced a severe brain drain, leading to complete degradation of its once word-class scientific potential, despite the fact that the country’s scientific institutions were essential in endeavors like space exploration, which was of prime importance for the entire mankind.

Ukraine’s vast natural resources are being stolen to this day, while the population of the country has suffered tremendously, being subjected to various forms of brutal exploitation. Millions of Ukrainian girls and women have been forced into prostitution, providing a constant supply of sex slaves for decades. All this led to a catastrophic decline in population, which dropped from 52 million in 1991 to 41 million in 2021, a staggering 21% decline in just 30 years. And just as it seemed things couldn’t possibly get worse, the political West intervened in 2014 and installed a puppet government filled with a volatile mix of corrupt oligarchs and openly Neo-Nazi organizations, plunging the country into a war with its own population, and setting the stage for a conflict with Russia, a military superpower in possession of the world’s most powerful nuclear arsenal.

At present, as Ukraine is left with very little to be plundered, the Kiev regime decided to give up the country’s last vestiges of national wealth – its gold reserves. According to Gold Seek, the Kiev regime has recently handed over at least $12 billion of Ukrainian gold reserves to the United States. It appears those might be the last gold reserves the country has left. Since Russia began its special military operation in February, the political West, led by the US, has appropriated tens of billions of dollars of Ukraine’s foreign exchange and gold reserves. After receiving tens of billions of dollars in so-called “military aid”, as well as financing for its government institutions, the Kiev regime was forced to give up its gold reserves as a condition for all US and EU “assistance”.

The author of the report, Chris Powell, Secretary/Treasurer of Gold Anti-Trust Action Committee Inc, said: “Since Russia began its attack on Ukraine’s non-Crimean territory in February, the United States and its allies have appropriated tens of billions of dollars in military and humanitarian aid to Ukraine. So why would Ukraine need to sell its gold reserves unless doing so was a condition of all that U.S. and European assistance, especially since the United States already had taken custody of the Ukrainian gold?

Stripping the wounded of their valuables in wartime always suggests greed or desperation — like desperation to keep the gold price down to support the U.S. dollar and other Western currencies…”

Last week, Reuters also reported that the Kiev regime had handed over the country’s gold. According to the report, Ukraine’s Central Bank has sold $12.4 billion of gold reserves since the beginning of Russia’s special military operation on Feb. 24, the bank’s deputy head said on July 17.

“We are selling (this gold) so that our importers are able to buy necessary goods for the country,” Deputy Governor Kateryna Rozhkova told national television. She stated the gold was not being sold to shore up Ukraine’s hryvnia currency.

The Kiev regime has been on financial (and other forms of) “life support” for years, as it’s been severely mismanaging the economy for nearly a decade. The political West obviously wanted to make sure it drained the last drop of the unfortunate country’s lifeblood, in addition to setting up a sort of an insurance policy to ensure its so-called “aid” wasn’t provided free of charge. With the steady advance of Russian and DNR/LNR forces in Donbass, the regime is highly unlikely to survive beyond 2022, let alone prevail, especially as the so-called “military aid” it got has proven to be effective only in the propaganda war. Despite the Kiev regime’s and Western state-run mainstream media efforts to portray the provided weapons as supposed game-changers, beyond certain tactical successes, they’ve proven to be largely inconsequential.

According to various reports, the Russian military has already destroyed most of the weapons sent by the political West and its numerous satellite states. In addition to getting rid of rusty, old hardware, which directly benefits NATO (primarily the US) Military Industrial Complexes, the political West also gains the opportunity to sell newer weapons, particularly fighter jets, to replace older platforms, along with taking a larger share of the immensely profitable global weapons market. And it is precisely the Kiev regime that is paying for it with the money, resources and now gold earned by countless generations of Ukrainian people. Worse yet, the population itself is paying for it in blood, as Ukrainian men are essentially being kidnapped and sent to almost certain death in a fight they cannot hope to win.

I remember when they squandered Viktor Yanukovych’s golden toilet after they ousted him and sent him running back to Russia.

Zelensky your Cockroach
Reply to  Muhammad your Prophet

Only complete morons like you believe in Maidanist retarded nonsense. btw Zelensky has a really shitty toilet: your mouth.

Last edited 17 days ago by Zelensky your Cockroach
10
Reply

Let’s not forget that these western bloc countries share a common colonial past where they traded Africans and indigenous people as slaves which eventually led all of them to unite forming a group called NATO. time has passed but the culture and tradition of savagery remains the same with this pack of criminals. The branch of hell on earth requiring eradication asap as punishment for crime against humanity.

You remember shite you brain damaged fool . He wasn’t running “back” to Russia he wasn’t from Russia, he was the legal and legitimate president of Ukraine attacked by criminals, bandits, nazi psychos and CIA terrorists. The worst scum on Earth that you sick piece of shit worship so much. Without their bloody coup Yanukovich would probably lost elections anyway, Ukraine would be a peaceful country, with it’s full borders including Crimea and 100.000+ people would be alive. But your demonic masters wanted human blood, may they drown in their own cursed blood and piss and burn in hell. And you with them.

and he was democratically elected (unlike Biden)

Rephrase that to-the USA government sent cargo planes to Ukraine to keep the gold in a “secure + safe ” place -like they keep Venezuela,s- Russia,s etc etc -even more “safer ” . It was all planned out .

Why ukrainian let this happen? This regime sell everything to the west, and take loans. Ukr. generals should perform a coup against zelensky before it’s too late.

Water supply must be doped their brains are shot

Judging from the long very coherent strategy since it was removed from the Twin Towers to destinations unknown (https://themillenniumreport.com/2016/10/treason-who-did-911-and-why-did-they-do-it/)… And then based on that excuse looting operations for energy and the gold in each sovereign nation(s) bank vaults (https://yandex.com/images/search?text=pictures%20of%20U.S.%20personnel%20with%20gold%20in%20Iraq&stype=image&lr=102624&source=serp&pos=0&img_url=https%3A%2F%2Fpbs.twimg.com%2Fmedia%2FEZXwc9UXYAIwziH.jpg&rpt=simage) EVERYWHERE else… MI$$I0N ACCOMPLI$HED!…

… But only if you are suicidal and wish to destroy every aspect of integrity in your own currency https://www.zerohedge.com/news/2022-07-22/its-official-russia-and-china-announce-new-global-reserve-currency!…

When i read about this some days ago it was stated that 12.4 billion of gold was 7 times the gold Ukraine was supposed to have (1.7 billion of gold).. The question there was from where did the gold come from? Western allies? I don’t know if it’s true or not but at least it makes one wonder.

On the subject of the F-U.K.U.$./EU$ open theft of every sovereign bank post 9/11 in Iraq, Afghanistan, Libya, Syria, Yemen and of course Ukraine… No one is going to like me for speaking this truth, but China and Russia have profited handsomely as a “proxy” to this theft by virtue of the Western Central Banks setting the price and controlling it via the futures (notional paper contracts) that cannot be properly linked to physical assets the banks hold -but the Beijing and Moscow have piggy backed all along!….

Which begs the biggest question. When do China and Russia say “when” to establish their market(s) independence of the Western Central banks habit for setting the price and restore integrity and equity for the global investor(s) that will be enured to move their precious metal holdings to Russia or China “if” they are committed to making that happen?…

As it stands “now” actions always speak louder than words, And I don’t see either the Russian Central Bank or PBOC in any way more credible than the BOE or Federal Reserve when it comes to controlling and manipulation of commodities markets. “Dirtiest Clean Shirts” Everyone!…

Freedom (in words only) – https://www.zerohedge.com/news/2022-07-22/its-official-russia-and-china-announce-new-global-reserve-currency

they are gonna put in the anus and make gaz !!! and green prostiputes !!!

who cares !?? they have green lgbt energy to suck dicks !!!

Just to set the record straight -Russia has set its OWN gold standard in March this year and the Rouble is based on it as a commodity which is a reality unlike the US Dollar which is based on—a Promise just like its worthless government bonds that’s why the Rouble has greatly increased in value as other countries are buying into it while the Dollar diminishes due in part to “money printing ” which caused inflation in the USA long before the outbreak in Ukraine so dont believe western lies.

You are right. In March 1 gram of gold was pegged to 5000 rubles. When this announcement was made, 1 USD could be traded for about 180 rubles. Last I checked, now, one USD can get you only about 55 rubles.

At the same time, at the start of the conflict, 1 USD was pegged to about 30 hryvnia, and today it is about 40 to one USD.

And consider this, this is all happening while the value of the USD is being devalued due to inflation.

Fuck all you assholes

yea fucck you too buddy

Bullwinkle is a dope
Reply to  Cock sucker

Where are these prostitutes? Asking for a friend…..

What is happening to Ukraine and its people is what we in the west call being ‘royally fucked’ Our ‘rulers’ never change.

The people of Ukraine better watch out because when all western currencies fail, which they will, Ukraine will be left with nothing with which to back their currency. The US admin is trying to do just that….with Ukrainian gold, in fact anybody’s gold. They ain’t fussy.

Perhaps Ukraine’s american owners might save the Ukraine currency from collapsing? Then again….probably not.

We should not pay taxes or VAT if we can possible avoid it.

This is what the Jews in America and Israel are good at.

Oh and subverting and lying about everything.

Well..is it so or was it moved in 2014 already? I remember a lot of newspaper stories then about moving the gold..or some gold in Hercules planes. They moved all of it i guess. Thats what the british crown corporation does when robbing countries and starting wars.

Wow what a mess blood suckers in the US draining the last drops of blood from the country so much for we stand with Ukraine. That’s just sad state the nazi’s have brought their country to.

The answer is obvious. The 🤡 clown has to die.