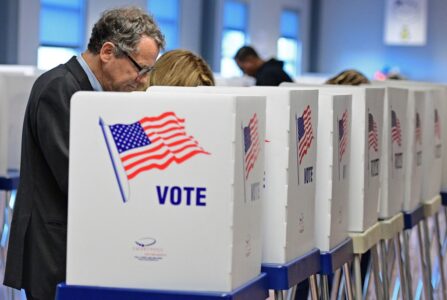 Last week Republican Glenn Youngkin defeated Democrat Terry McAuliffe in the race for Virginia governor. Youngkin won 50-48%, with the remainder of the vote going to third party candidates. Republicans won the race for Lt. Governor and Attorney General, and also flipped the Virginia House of Delegates.  Larry Sabato, head of the University of Virginia’s Center for Politics, quoted a high ranking McAuliffe campaign surrogate, ‘It’s a bloodbath’ for Democrats. McAuliffe conceded the race the morning after the election.

The Washington Post’s exit poll shows Youngkin won 55% of independent voters. During the final weeks of the campaign, Youngkin took Terry McAuliffe’s disastrous ‘I don’t think parents should be telling schools what they should teach’ quote and wielded to great effect against him. Of those voters listing education as their top issue (24% of respondents) 55% voted for Youngkin. In this way Youngkin made great gains in Northern Virginia.  McAuliffe won all six Northern Virginia counties but not by a wide enough margin to win the commonwealth. Meanwhile, Youngkin handily won Virginia’s rural counties, a constituency all but abandoned by Democrats obsessed with race and intersectionality. McAuliffe had trouble in other demographic groups. NBC News’ exit poll found that 57% of white women voted for Youngkin. In 2020 Biden won 50% of white women voters. A Suffolk University/USA Today poll released on 29 October showed Biden’s approval rating at 42% in Virginia.

Youngkin should have been a vulnerable candidate. He’s a middle-aged white businessman and the former CEO of the Carlyle Group private equity firm. Youngkin’s a newer version of 2012 GOP presidential nominee Mitt Romney, who lost Virginia to Barrack Obama by four points. But clad in a button-down shirt, khaki pants and his trademark sleeveless fleece, Youngkin came across as affable and optimistic. Tellingly he kept Trump at a distance (the two never campaigned together) but did not directly disavow the former president. Youngkin’s campaign against Critical Race Theory and advocacy for parental control of schools was enough to get Trump’s MAGA voters to the polls. Overall Youngkin ran a focused campaign focusing on a few ideas.

In contrast, McAuliffe was a terrible candidate. He’d already served one term as governor. Virginia’s constitution prevents a governor from serving consecutive terms. But McAuliffe was never a great candidate for Virginia, anyway. When McAuliffe ran for governor in 2013, he defeated Republican Ken Cuccinelli 47%-45%, with the libertarian Robert Sarvis taking a further 6 percentage points. To put it another way, 51% of Virginians voted against Terry McAuliffe in 2013. He actually brought Randi Weingarten, head of the United Federation of Teachers, to stump with him during the last few days of the campaign. Weingarten is herself controversial as she pushed very hard to keep schools closed during the Covid pandemic. President Biden and former president Barack Obama also campaigned in Virginia. ‘We don’t have time to be wasting on these phony, trumped-up culture wars,’ Obama declared. McAuliffe tried desperately to link Youngkin to Trump and said his campaign against Critical Race Theory was a racial ‘dog whistle’. Campaigns need circumstances, ideas and candidates. Any two should be enough to win. McAuliffe had none.

Youngkin’s victory was not the only shock of election night. Here in this observer’s home state of New Jersey, Republican challenger Jack Ciattarelli lost to incumbent Democrat Governor Phil Murphy by less than 3 percentage points, or about 50,000 votes. Like Glenn Youngkin, Ciattarelli or ‘Jack’ as his ubiquitous campaign signs called him, made great strides in the suburbs. Ciattarelli’s campaign remorselessly hammered Murphy on New Jersey’s high taxes, ‘If taxes are your issue,’ Murphy said during a talk at Rowan State University in 2019, ‘then New Jersey’s probably not your state.’ Ciattarelli used Murphy’s own words against him again and again in campaign ads.

Perhaps a greater shock than Ciattarelli’s near victory, is Senate President Steve Sweeney’s defeat. Sweeney is the longest serving senate president in the New Jersey State Senate’s history, having served in the role since 2010. He is a powerful New Jersey political institution all his own. Sweeny lost his reelection bid to Republican Edward Durr. Mr. Durr is a truck driver from Gloucester County (in the southern part of the state near Philadelphia) who has never held elected office before. Ironically many New Jersey progressives are happy about Sweeney’s defeat, as he held down Murphy’s proposed tax and spend increases. With Sweeney gone, New Jersey Democrats will drift further left, like Democrats everywhere.

The stupidity being pushed by the Democrats cannot be explained away with hubris. The ruling US elites are setting up the stage for a Republican majority for the upcoming midterms AND 2024. I’ve read a plausible argument elsewhere that it’s to condition the West for an ideological war similar to the last Cold War against the Soviet Union. They cannot allow the West move to the “Left” as it would be impossible for the MIC to justify their massive budgets.

50-48 is just a small gap. This was a victory for the election cheaters as they :1)get to check how low they can get away with and 2)they get to project the appearance of a fair election process. 2022 is when they get to make a killing in their candidates. Nothing changes until and unless Republicans become pro active in watching the whole election process and contesting inauthentic ballots. Despite the above, i also feel there’s someone deliberately putting American leadership into gridlock. I guess a busy politician does not get in the way of various offices.