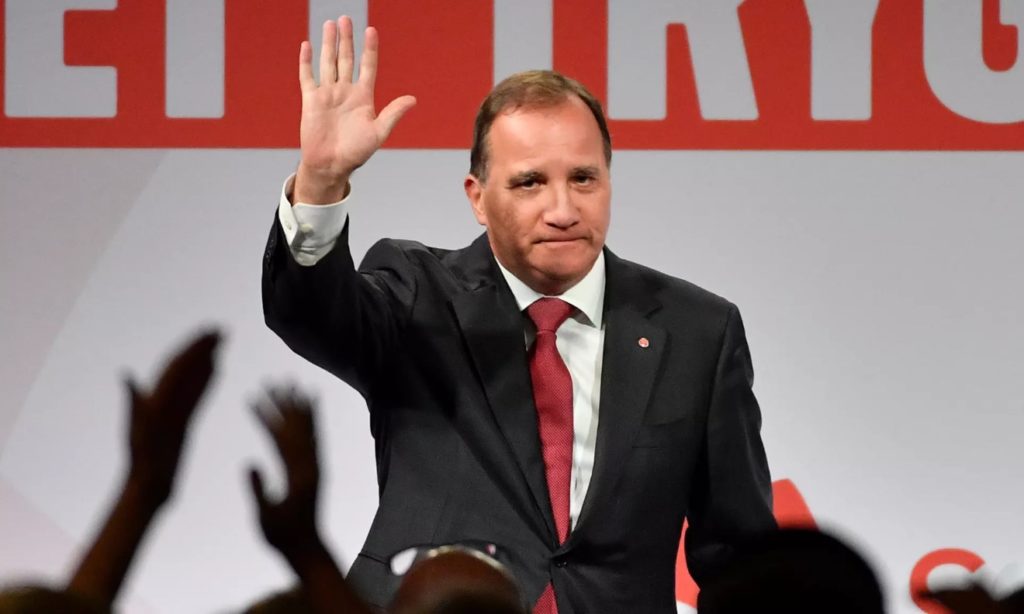 Stefan Löfven is to step down after he lost a mandatory confidence vote in parliament. Photograph: Jonas Ekstromer/EPA

On September 25th, Swedish Prime Minister Stefan Lofven lost the mandatory vote of confidence in parliament, indicating that his party, the Social Democrats will have to step down from power.

The Local, a Scandinavian news site reported that a total of 204 out of 349 members of the Swedish parliament voted against supporting Lofven.

According to, the now former, Prime Minister Lofven, very few people want a new election, including voters. He also promised to continue working to build a new government across the political divide.

The divide he referred regards the September 9th general elections, which presented on clear winner.

In the final result, the Social Democrats got 28.3% while the Green and Left parties got 4.4% and 8% respectively. The opposition Moderate Party, meanwhile, received 19.8% of the vote, while their allies the Centre, Liberal and Christian Democrat parties, got 8.6%, 5.5% and 6.3% respectively. To present these percentages in seats, Anna Nyqvist, head of the Swedish Election Authority, told the TT newswire that the allocation of seats would remain unchanged, with 144 seats to the red-green bloc, 143 to the centre-right Alliance parties, and 62 seats to the anti-immigration Sweden Democrats.

Prime Minister Stefan Löfven used the results to argue that as the largest party leading the largest parliamentary bloc, the Social Democrats should lead Sweden’s next government.

“The final election result shows that we Social Democrats are clearly the largest party and have the biggest support for a government if the right-wing parties do not break their promise and create a common bloc with the Sweden Democrats,” he said.

The divide comes from the unaligned far-right Sweden Democrats have capitalized on growing anti-migrant sentiment after an influx of refugees in 2015 rattled the political landscape in one of the world’s most liberal nations.

Both the right and left-blocs have vowed to not form a government with the Sweden Democrats.

Ulf Kristersson, the leader of the biggest opposition party, the Moderates, has excluded outright government talks with the Sweden Democrats but hasn’t rejected grabbing power should the nationalists support him.

Left Party leader Jonas Sjostedt said on September 19th that the Alliance is “cooking a recipe for chaos” given that it will need backing from the nationalists to form a government. “We can’t accept that the Alliance seizes power when they lost the election.”

Due to Stefan Lofven not vacating his post voluntarily, there was a mandatory vote of confidence. After he was voted out on September 25th, he must vacate his post. After that, the parliament’s speaker must propose a new prime minister. The speaker can propose four different prime minister candidates. If all four are rejected by parliament, a new election will be called.

Andreas Norlen, a MP from the centre-right Moderate party who is the new speaker, could ask his own party leader Ulf Kristersson to try to form a government — either with the implicit support of the Sweden Democrats or by trying to entice Mr Lofven’s Social Democrats into a grand coalition. Norlen said on Monday that he would focus on whether a government could pass its budget. It is currently unclear if any coalition could, based on party leaders’ comments hitherto. Lofven saw his first budget voted down in 2014, sparking a crisis that almost led to new elections.

To avoid new elections one of the main parties must compromise in some way.

Huge election fraud in Sweden – Sweden democrats were polled at 35% somehow only got 17% https://www.youtube.com/watch?v=CnRs01KPHkY

There is huge election fraud in every country occupied by the racist supremacist global Jewish confederate slave empire dictatorship. The Swedish democrats better bring it up as an election issue and also send their own election monitoring video proceedings if they ever want to win.

https://voiceofeurope.com/2018/09/international-election-observers-ruled-that-cheating-occurred-in-46-per-cent-of-the-250-swedish-polling-stations-they-visited/ Since the general election earlier this month, Valprövningsnämnden (an election authority) has received over 400 complaints regarding voter fraud. The reports vary from missing ballots to inappropriate interference to accusations of manipulated computers, figures and results. In addition, 25 international election observers ruled that cheating occurred in 46 per cent of the 250 polling stations they visited – and in the vast majority of cases polling staff did not intervene to prevent the practice. The election authority will continue to receive complaints until 26 September. They will then investigate the complaints and decide if any wrongdoings have occurred. Their investigation is expected to be completed no earlier than December.

Factored in all those irregularities, the right wingers may very be the second strongest block. And even without, to categorically refuse any cooperation with them can hardly be called ‘according to the voter’s will’.

The ruling parties need to be aware that, at some point, the voters WILL get the government they desire. And then the Sweden Democrats might even be talking as the bigger partner in a coalition or simply be the majority on their own.

You can call me Al
Reply to  FleshGoredon

It is not unusual for “Both the right and left-blocs have vowed to not form a government with the Sweden Democrats.” – whether it be in any European Country. It has happened before and it will happen again, until, as you say, we finally say enough is enough.

FleshGoredon
Reply to  You can call me Al

In Germany it first happened to the leftists after the fall of the Berlin wall and now they’re doing it with the AfD.

At least they’re impartial with their lack of democracy.

You can call me Al
Reply to  Kell McBanned