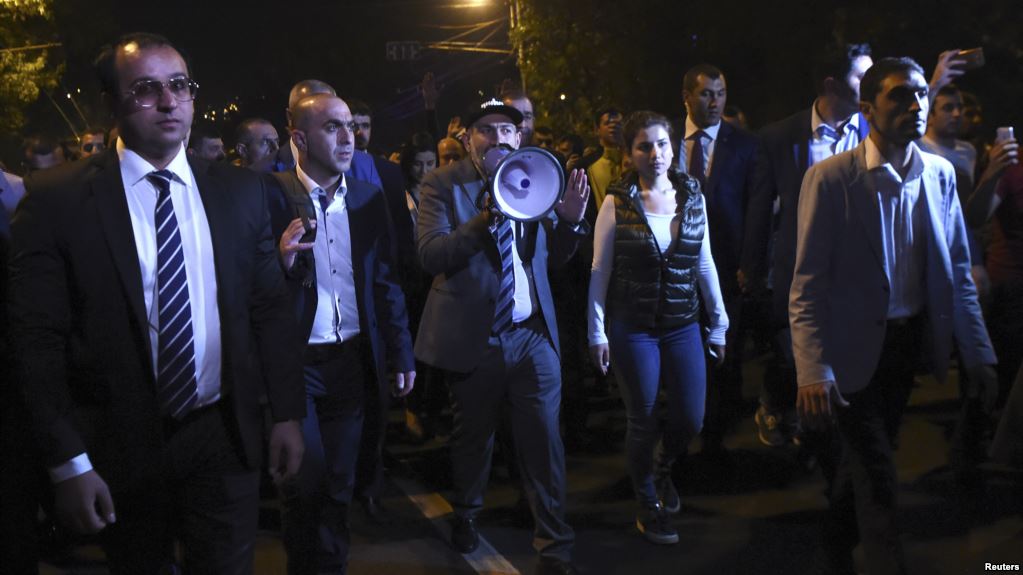 Armenian Prime Minister Nikol Pashinyan (C) addresses supporters during a protest against a bill passed by members of parliament to block the dissolution of the National Assembly, in Yerevan, Armenia, Oct. 2, 2018.

Armenia went into another political crisis after Prime Minister Nikol Pashinyan announced he would resign, following the rallies he headed in protest of amendments Parliament adopted at a special sitting on October 2nd.

The Prime Minister has called out several thousand demonstrators to challenge the changes, which he sees as an attempt to subvert the early parliamentary elections.

“The adoption of the bill is a plot against the highest power – the people of the Republic of Armenia, Pashinyan told thousands of supporters. He said he had already signed orders to dismiss Ministers and Governors representing Armenian Revolutionary Federation Dashnaktsutyun and Prosperous Armenia Parties.

The Prime Minister took to Facebook to urge citizens to gather for a peaceful rally and said he would address the public in front of the National Assembly building shortly. He urged MPs not to register for the vote, saying that anybody that voted in favor of the amendment was declaring political war against the Armenian people.

The protest follows the Armenian National Assembly’s vote, which adopted controversial amendments to the Law on the Parliament’s Rules of Procedure with 67 votes.

According to changes proposed by three parliamentary forces – the Republican Party, ARF Dashnaktsutyun and Prosperous Armenia Party, the sitting of the National Assembly will not be considered as failed but will be interrupted if no discussion of the issue takes place, for example, due to an emergency or if the participation of MPs in the session is hampered. Pashinyan views the bill as part of counter-revolution efforts and an attempt to subvert early elections.

Following Pashinyan’s announcement of his resignation, the three parliamentary forces – the Republican Party, the ARF Dashnaktsutyun, Prosperous Armenia Party and Yelk bloc – said that they would not nominate a Prime Minister, after the current’s resignation is finalized.

“My impression is that our partners from the HHK, BHK, and Dashnaktsutyun got our message…. They said that in this situation nobody is going to nominate a candidate for the post of prime minister,” he told supporters after the two-hour meeting, following the protests.

The Parliament will have seven days to appoint a new Prime Minister, if it fails to do so, there will have to be one more vote for a Prime Minister within seven more days.

“If the National Assembly fails to elect new Prime Minister after a second attempt, this will lead to early parliamentary elections,” Nikol Pashinyan said. He said snap elections are an absolute necessity, as the current Parliament, he said, “does not represent people.”

The prime minister made clear that he will tender his resignation “in the coming days” to ensure the elections are held “in the first half of December.” He said he might step down even before Armenia hosts a Francophonie summit on October 11-12.

All of the listed ministers were released following Prime Minister Pashinyan’s recommendations.

The protests were not violent, Chief of the Armenian Police Valery Osipyan said that people have gathered to express their will calmly. He said his presence at the Baghramyan Avenue was agreed only with the necessity to ensure public order.

Meanwhile, Azerbaijani President Ilham Aliyev and Armenian Prime Minister Nikol Pashinyan spoke for the first time and agreed on several steps to reduce tension between their respective armed forces. The two leaders met on the sidelines of the summit of the Commonwealth of Independent States, held in Dushanbe on September 27th and 28th.

The meeting between the leaders resulted in vague and modest agreements, however they represent a mechanism that could be potentially meaningful for the reduction of violence that continues to regularly flare along the Nagorno-Karabakh region. This, obviously, stalls diplomatic progress on resolving the conflict.

“When shootings from both sides are constantly being heard, it’s not very logical to talk about resolution” of the conflict, Pashinyan said. “This discussion comes up constantly: who started it, who violated the ceasefire, who shot first and who second. If we both want to truly observe the ceasefire, we should have this kind of operational contact.”

The conflict is centered around the Nagorno-Karabakh region, over which both countries have a claim. There is an active ceasefire agreement since 1994, however both sides constantly accuse each other of breaching it. Both countries’ media count the times the opposition has breached the agreement. Tigran Balayan, spokesperson of the Ministry of Foreign Affairs (MFA) of Armenia on September 12th stated that Azerbaijan constantly carries out ceasefire breaches. On the other side, as recently as October 2nd, Azeri media reported that Armenian security forces have breached the agreement 30 times within 24 hours.

Every such political crisis in Armenia and showing that the Prime Minister has to use protests to implement policy creates conditions, which could be used by Azerbaijan to recapture the contested region.

New Armenian Government Is Distancing Itself From Pro-Russia Military Bloc

lol what a shithole.

Its no different to US politics really Daniel :)