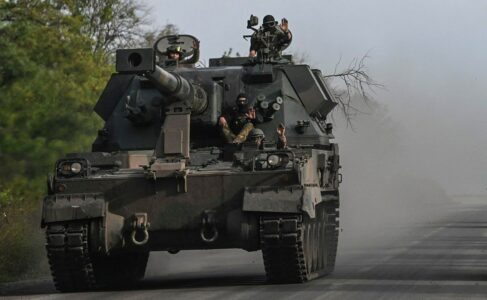 Sources of the Russian Wagner PMC shared another video showing the successful attack of the Russian Lancet Loitering Munition Against the foreign military equipment used by the Armed Forces of Ukraine.

This time, the target of the Russian Lancet was the Polish-made 155-mm self-propelled howitzer AHS Krab.

Formally, the AHS Krab was developed in Poland and produced completely by local industry. However, it turned out that some of its main components are of foreign origin. For example, at the end of 2014, a contract was signed with the South Korean company Samsung Techwin for the supply of ready-made chassis from the K9 Thunder ACS and the their subsequent licensed production in Poland.

Poland tried to promote its Krabs on the international market, but no foreign army was interested to buy it. Ukraine became their first foreign user.

According to Polish sources, in late October, Ukrainian Defense Minister Oleksiy Reznikov claimed that Poland had already transferred three divisions of 155 mm/52 Krab self-propelled howitzers to Ukraine, that is, a total of 54 installations. The first howitzers were reportedly deployed in Ukraine back in May.

The high technical and combat potential makes the Crab a priority target for Russian forces. The Russian military has all the necessary means to detect and destroy such targets in parking lots, on the march or in firing positions.

The Russian military has been using the Lancet and other types of loitering munitions against the enemy forces and their advanced military equipment since February with much success. In the last few weeks, the use of these munitions was significantly expanded.

Oh those russians…. their pointless efforts in Bakhmut alone counts more dead soldiers / Wagner Nazis than soviet efforts in Aghanistan & added to that number all Americans who died in 20 years’ worth of war in the Middle East total.

Dodo
Reply to  Putin is a rape victim.

Hey, since you are an expert in geopolitics and strategy, whats your opinion about the democrats losing the congress and cutting down support to Zelesnky while also begging them to negotiate with the russians for a way out of the war before the winter campain start and Europe freezes ?

No one is begging Ukraine to negotiate. But Ukraine is open to negotiations just like before.

“According to President @ZelenskyyUa, conditions for peace negotiations with Russia are the following:

A lot to negotiate in the details of nbr. 3 and 5. The sooner RU accept negotiations, the better and cheaper.

Ukrain won’t be allowed to negotiate a visit to the bog without a green light from their American handlers.

Why would Ukraine negotiate, they have the initiative. They see how the Russians retreat.

The Germans thought that as well on 16 Dec 1944. But unfortunately it didn’t turn out as well as they thought it would.

USA is a shithole, EU is becoming one
Reply to  FreeToThink

Ukraine cannot negotiate anything. NOTHING. Anything they would negotiate is blocked by their Constitution and this cannot be changed without elections and elections are impossible during war.

UKRAINE IS ON A DEAD ROAD.

THE ONLY HOPE FOR UKRAINIAN PEOPLE IS THAT RUSSIANS TAKES WHAT THEY WANT AND LEAVE THE REST FOR THE POLES.

UKRAINIANS SHOULD COME TO. THEIR SENSES AND LEARN A PROPER LANGUAGE, EITHER RUSSIAN OR POLISH.

Last edited 2 months ago by USA is a shithole, EU is becoming one
4
Reply

Khohol cannon fodder
Reply to  USA is a shithole, EU is becoming one

The most correct judgement from all.

Bwahahahah since when does the loser of the war set negotiating conditions?

Never thats when. Ukraine must capitulate, immediatly, its time to end this nonsense.

this is real only Ukraine is land strip from Russian Kyiv po polish border.. but nobody knows where polish border will reach next year …

Cocalinsky sould stop sniffing the white stuff, than maybe he would be a bit more realistic.

The ukranians are going to hang zelensky from a light pole and sue for peace probably, poverty sucks and so does hypothermia

Nobody will ever try negotiate from Kukraine, fearing of the nazi bastards ! It’s almost a suicide mission. The only viable option is to introduce a peace keeping mission lead by Poland for the Galicia reich with russian guarantees. Practically Lvov and Kiev becoming a colony of Poland. Nobody will trust an ukrop extremist ruled banderastan.

How the fuck has this retard still not figured out that America has a one party state? Hurrr durrr please Jewish republicans, save us. Although voting hasn’t made any difference in the past 200 years, next time will be different for sure!!!!!

Fact: the “govt” does not control the MIC, rather it controls the govt. So the weapons will continue flow, though probably less openly. The MIC, the senators, congress folk all need the money…

Cope Harder
Reply to  Putin is a rape victim.

This is also my impression.

Artillery in particular, but looks lke this was a kamikaze drone … Apparently these drones are making a difference in this war (along side the high precision russian missles), unlike the turdish crappy drones …

The thousands of krasnopol shells hitting their targets arent enough for you?

Crab was fine. One drone exploded and burned the tree and the second one missed completely.

And the Krab won. It was expected vs such a small drone. I wonder what started to burn in the bush.

What started to burn? Some roasting ukrops.

Azov is not an Ukraine sea
Reply to  FreeToThink

That vehicle have been taken out of service

Thats the ammo cooking off inside the krab.

That thing is done.

Lol you moron. Max armor of such Systems are only around 20-30mm steel plates. This is no match for the loitering warheads with around 10kg of high explosive. Even Tanks can be destroyed from top, sides, and back. Anyway more powerful Systems soon entering production.

May I get some weights for my barbell out of all that Western “help” ?

Michel LeBlanc
Reply to  USA is a shithole, EU is becoming one

Am i the only one reading polish crap? Sorry i had to go there. ;-)

Happy birthday Lancets ! Kill those nazi bastards and theirs anglo-shit masters ! Hope for Kalashnikov to triple the production in such a manner that SF will serve us the daily ukrofucks Lancet denazification !

Says a hasbara or nato troll with nicname Desinfo? Looool

No visa 6 months for Russians

Oy!
Reply to  No visa 6 months for Russians

If Putin wasn’t gay the Russians would blow up the bridges across the Dnieper and you wouldn’t have so many weapons at the front killing Russians.

Yep well unfortunately for both sides, it’s a blood ritual so it’s gunna keep going for a while. Sadly the orchestrators are really into this kind of thing.

First foreign buyers, the ukies? – and they found they got the crabs from their krabs.

But isn’t that just another Polish joke? Selling goods to deadbeats?

Hey, I think I’ll stop that homeless beggar at the intersection tomorrow and offer to sell him my car and he can pay me next year.

Unbeliavable how the Krab was hit despite being in a well protected boulevard of trees.

didnt see too much damage on that krab…