The Leopard 2 PL tank has been developed by the Rheinmetall Company for the Polish Army. 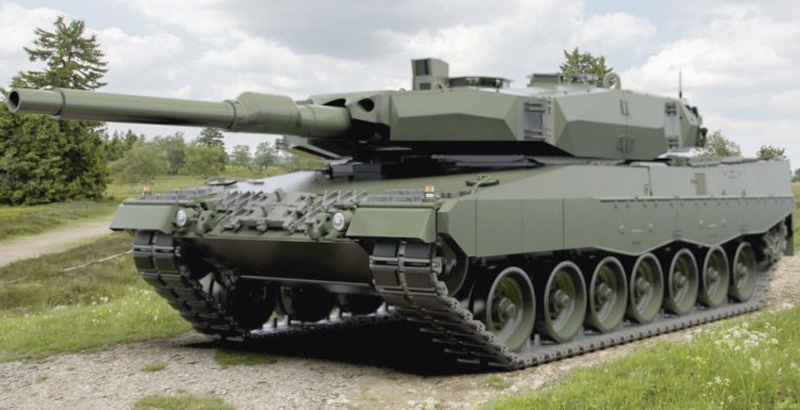 German Rheinmetall Company presented to public the upgraded Leopard 2 PL tank at the IDEX 2017 international arms exhibition, the WarSpot information website reported. This version, intended for the Polish Army, is a future development of the Leopard 2A4 tank. In 2002-2003, 128 tanks of this type were delivered free of charge to the Polish Armed Forces. Since 2015, their upgraded version, designed to bring the tanks practically to the level of the Leopard 2A6, has been developing.

The Leopard 2 PL is equipped with an outboard composite armor, which significantly improves the protection against some types of ammunition, and has increased ballistic protection of the tower. Hydraulic stabilization mechanisms of the gun and turret drives of the tank were replaced with electrical ones that allowed to improve work of mechanisms and increase space inside the tank. The Leopard 2 PL is also equipped with cameras, which improve the visual field of a driver, and a new surveillance system for a crew. The L44 weapon system was also upgraded and allows to use new, more powerful projectiles. Other distinctive features of the tank include an automatic extinguishing system, an increased ammunition equipment, an auxiliary power unit, improved mine protection, and increased weight of the tank (from 56 to 60 tons).

The Leopard 2A4 is the most common version of the Leopard 2 tank. In total, about 2,500 tanks of this version were produced without taking into account the Swiss Pz 87 licensed copy. Since 2000, Germany has been actively selling the tanks to allied states, and, at the moment, these fighting vehicles are in service in 18 countries, including Turkey, which bought 354 tanks.

However, the Leopard 2A4 tanks have already shown their ‘weakness’ during the military operation of the Turkish Army on the territory of Syria. According to numerous reports, Turkey has lost at least 10 Leopard tanks in the country.

That’s a solid tank. Now they need to study the tank Army Russia is building to learn how to use em

As can see, even Poland is preparing for war. For now we can sleep in peace. The nuclear war is inevitable, like death, but not yet. When will this happen? Let me remind here a fragment of an ancient vision: “And [the king of the north] will go back (to) his land with great wealth [1945. This detail indicated that Hitler will attack also the Soviet Union and will fight to the bitter end. In the beginning there were no signs of such the ending of this war]; and his heart (will be) against the holy covenant [Soviet Union introduced state atheism]; and will act [it means activity in the international arena]; and turned back to his own land [1991-1993. The collapse of the Soviet Union and the Warsaw Pact. Russian troops returned to their country]. At the appointed time [he] will return back.” (Daniel 11:28, 29a) The return of Russia in this context means crisis, which will eclipse the Great Depression. Not only the eurozone will break up, but also the European Union and NATO. Then many countries of the former Eastern block will return to Russia’s zone of influence. Russian troops will be stationed here again.

“And [the king of the north] will enter into the south [this can be Georgia], but it will not be as the former [2008 – Georgia] or as the latter [Ukraine], for the dwellers of coastlands of Kittim [USA, in the beginning without Britain] will come against him, and he will be dejected, and will go back.” (Daniel 11:29b, 30a)

What will induce the “king of the north” to enter into the south? Jesus said: “For nation will rise against nation”, as in 2008, and then …

This will be a nuclear war. (Revelation 6:4) “A great sword” in this context means a nuclear sword. However, it will be neither “the end of the world” (Armageddon). As Jesus foretold, it will be “the beginning of birth pains”. (Matthew 24:7, 8)

It is no coincidence that Barack Obama wins presidency in 2008 and 2012. God in this way has secured us against a premature world war. The first should be the return of Russia, and then the war, and not vice versa. (cf. Jeremiah 1:12) The victory of Donald Trump also is not accidental. There is hope for improvement in Russian-American relations. The world will be safer, at least for a moment.

That gibberish can mean anything. I’m pretty you go back every 50 years you’ll find a different interpretation, depending on what was grabbing the headlines at that moment in time.

This is a coffin on tracks, however as we say you don’t look into the teeth of a gifted horse. Can’t wait to see PL-01 to come out, i can’t believe government actually investing money into this ridiculous project.