On February 5, an attacker was shot and arrested in Iran after he had to break into the office of Iranian President Hassan Rouhani in Teheran, the Iranian pro-government news agency Fars reported citing Deputy Governor of Tehran Mohsen Hamedani.

“We are trying to identify the person and find out his motivation,” Fars quoted Hamedani.

According to media reports, the man was armed with a bladed weapon. He attempted to break into the building, but was wounded and detained by the security forces.

Sorry about that, Iran. The US is terribly embarrassed about the whole affair. This happens a lot when McCain talks to Nettanyahu – the conversations quickly degrade to a shouting match where both men are shrieking “Will you shut up! You’re MY little bitch. THAT’S the way it is!”

We did have an ankle monitoring device on Senator McCain’s leg, but he must have chewed it off and escaped. Please bind and sedate him and mail him back to us. We’ll pay the shipping. Watch out for the soft spot on his skull – he’s had some kind of repairs lately. 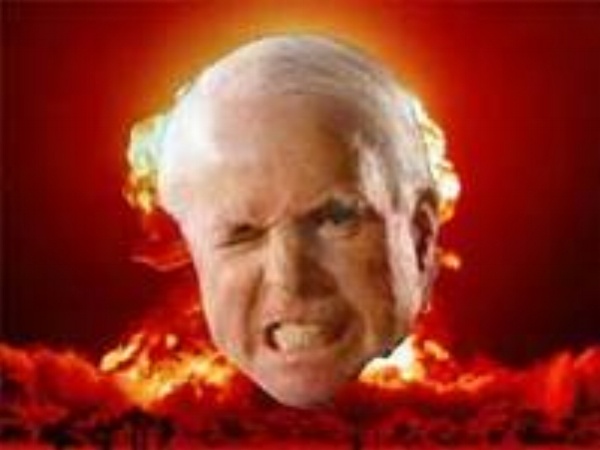 The police says the man (about 35) wearing a shroud (graveclothes) and armed with a Qameh (a kind of cutlass) tried to enter the complex, the guards at the [second] gate fired a warning shot in the air first and then hit him in the leg. He’s currently in the hospital.

In the leg? Warning shot? For an armed person?
Clearly Iranian security guards are not good at their jobs as the standard (and accepted) procedure is to shoot anybody you don’t like first and then lie about it later: “Your honour, he was reaching for his weapon!”

The important part is he was wearing a shroud. In our culture it has either of the two meanings:
1- He has lost everything and doesn’t have anything else to lose.
2- He is ready to give his life for his cause (usually when under attack and against an overwhelming force.
In any case, wearing it means the wearer is ready to die fighting

I’ll come back and edit (or reply to my own post) if I find anything meaningful in Persian sources..

Garga ; on your posting concerning US troops being redeployed to Afghanistan , under the poppy photo , someone else (no name) made a comment calling you tinfoil .. bla..bla did you get hacked or did SF get hacked ? Respect : Cheers

Thank you Ronald for your caring and time.

No, that’s me trying to be funny and sarcastic, but apparently based on your impression I’ve spectacularly failed! :’-(

I think shooting in the leg is very good, when possible. Especially when the armed person has a big knife. Mostly no reason to kill, could be a confused or psychiatric case.
It shows the level of civilisation from the guard….

Well done; I bet that is another MEK paid killer. Great for taking him out.