On July 1st, Seattle police stepped in and cleared the “Capital Hill Autonomous Zone” in an early morning sweep.

This followed an executive order by Mayor Jenny Durkan.

Due to ongoing violence and public safety issues in the East Precinct/Cal Anderson Park area. Mayor Jenny Durkan has issued an executive order to vacate the area. Seattle police will be in the area this morning enforcing the Mayor’s order. https://t.co/SpVRYIB8eg pic.twitter.com/JAt2AvUTCr

Hundreds of police officers in riot gear pushed back the protesters in the autonomous zone and cleared it out.

Anyone who remains in the area, or returns to the area, is subject to arrest.

Police entered bathrooms in search of protesters who had stayed behind and removed a barricade of trash cans erected by demonstrators to clear a path for an armored vehicle.

A protester with a megaphone told fellow demonstrators to peacefully exit the zone:

“We’ve made history, Everybody out,” Rick Hearns, yelled into his megaphone according to Seattle Times. “We’ll get another place. Don’t taunt the officers.”

Before it was cleared out, there were six shootings, two deaths.

Let's see: six shootings, two teenage deaths, and @MayorJenny still says "it's an arts festival". THEN, the CHAZ threatens to take over her 5,000 sq ft house worth $7.6 million after her new addition. A DAY LATER, she brings in the police, "end the chaos!" #Leadership #Comedy

Prior to the police clearing it out, City Council member Kshama Sawant led a march to Durkan’s home, where she railed against the Mayor and police brutality with a crowd of BLM protesters.

#UPDATE: First look at the #CHOP zone since Seattle Police cleared it out this morning.

Dozens of tents and lots belongings left, but all protestors have been cleared out. @KIRO7Seattle pic.twitter.com/dULugXBtBz

Other than that, there were limited protests throughout the US, with little to no violence.

On Capitol Hill, several Seattle City Council members arrived at the protest front lines late Saturday night after police used flash-bang devices and pepper spray on the crowd. Many council members also took to social media during the night to call on Seattle Police and Chief Carmen Best to de-escalate how they manage crowd control at the ongoing demonstrations. …

National guard members also lined the street to keep the crowd back.

The police department said people had moved the barricade and were throwing rocks, bottles and explosives at officers. They said several officers were injured.

12:30 a.m. — On Capitol Hill, tensions mounted through the night Sunday between demonstrators and police. The crowd has continued to gather for several nights near the Seattle Police Department’s East Precinct at 11th and Pine, and again, on this 10th day of protests in Seattle for Black lives, the police responded with force.

By 10 p.m., Seattle Police said they’d made multiple announcements for the crowd to move back.

Just after midnight, SPD said the situation escalated, and officers used pepper spray and blast balls to drive back the crowd. 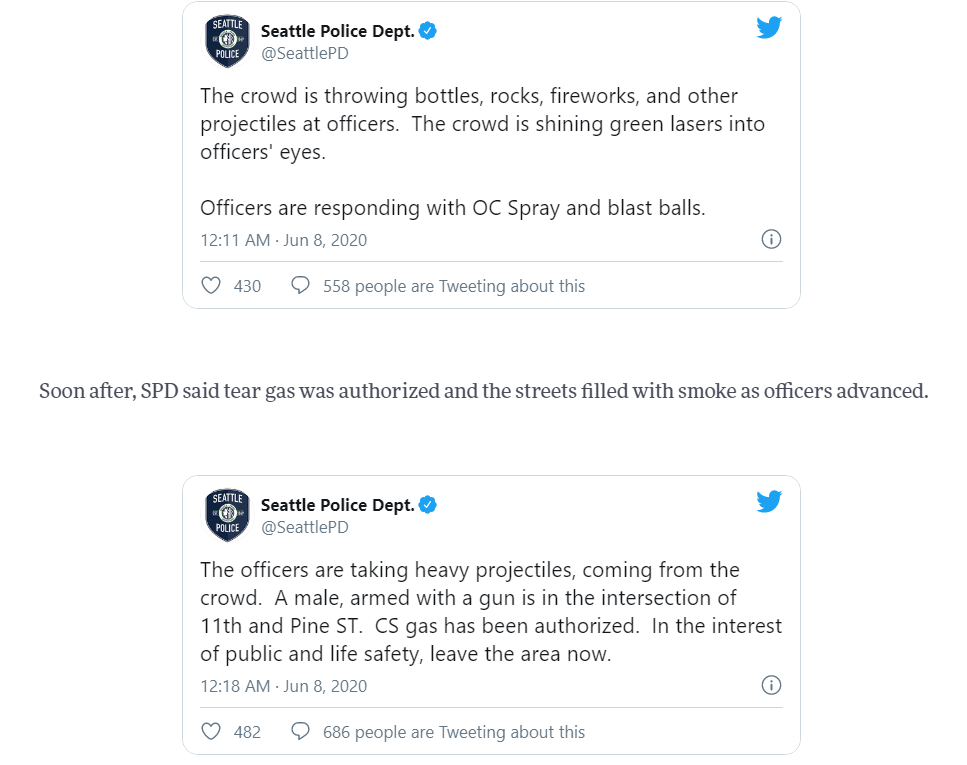 I took this picture at what turned into the CHAZ/CHOP zone June 8th. A zoom image is also included. 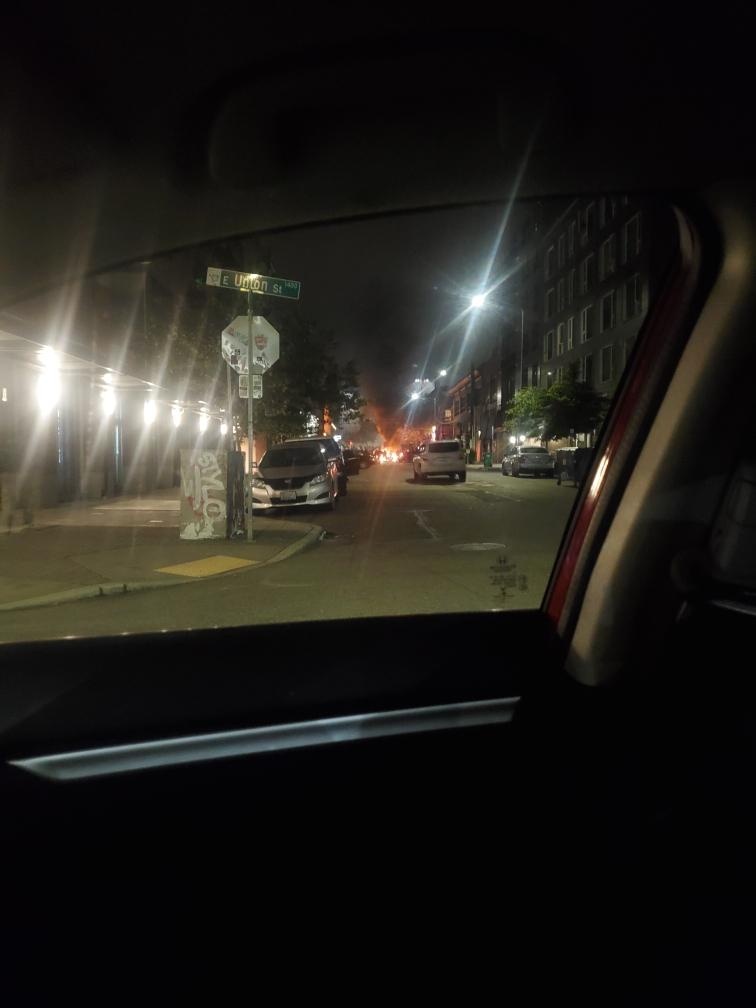 I love the “Move Back” shouting of the police. It’s like telling them piss off or we will break your fucking heads with our bats. We should adopt it here too, great job guys!

My view as someone who witnessed this episode first hand on site in vehicles and on foot. Is that the police and military had the situation under control. And were doing the best that anyone reasonably could under the circumstances. It was never a peaceful civil rights demonstration of the right to peaceful assembly and protest. It was always interlaced with violent, disorderly and dangerous elements involved in rioting and anarchy.

The mayor and city council were well aware by the time that they abandoned the police station and neighborhood. That they were abandoning it to demonstrators incapable of controlling the criminal elements amongst them. And that withdrawing police, fire and medical services from this area was unlikely to improve the situation. As subsequent events later verified.

For the first time on this site I agree with you Richard.

Fortunately it never got to the stage where I felt that it was necessary to deploy this level of concealed security equipment in theater. 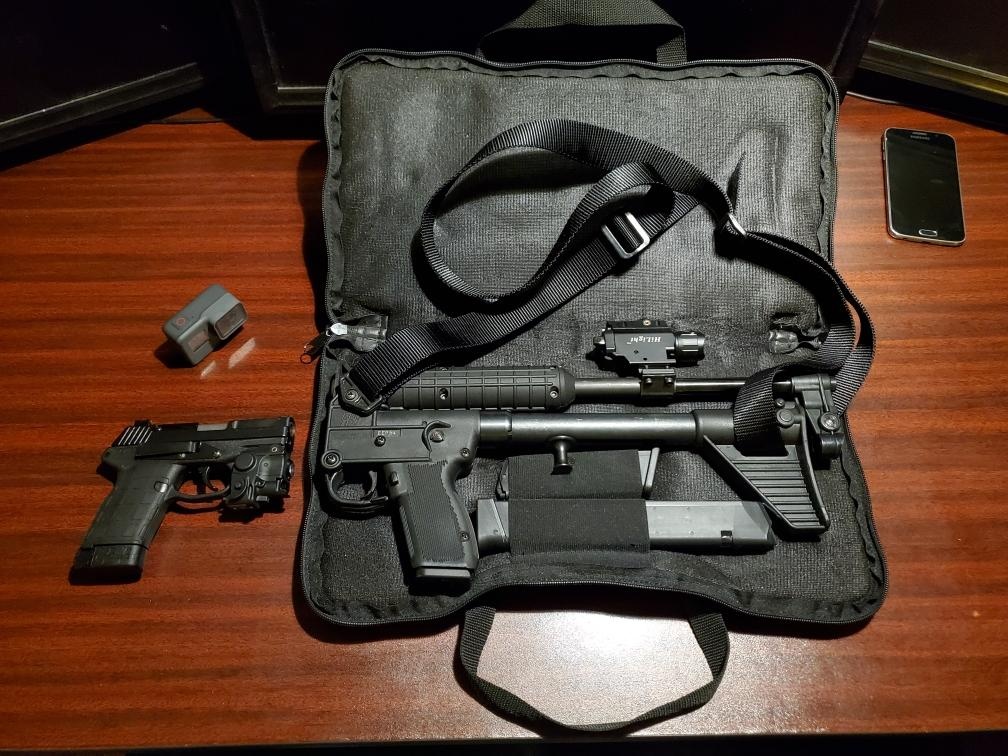 This is the extent of the security equipment that I had with me during the height of the conflict. I have significantly heavier weaponry available. But my goal was to monitor and help defuse the situation, not escalate it. And under the circumstances I felt that this was sufficient.

The weapon in the soft case – is that a select fire, semi auto/fully auto option, pistol, and if so, would it qualify as auto pistol or sub machine gun?

Aha, thanks for info. Wondered if select fire due to large capacity magazine in case. So in a way, is kind of like a souped-up, modern, Mauser pistol carbine!

Yes, but in .40 S&W rather than 9mm. And with a 16 inch barrel that increases velocity by 200 to 300 feet per second depending on the round over a pistol length barrel.

In the wilderness I carried the 9mm pistol seen in the picture for wolf, cougar and black bear protection. Until the bigfoot encounters started. Now on a hike I bring both loaded for large dangerous lifeforms.

With the right ammo the carbine will provide 2 to 3 feet of penetration. It might not be a 1 shot show stopper. But with multiple hits it’s a credible deterrent.

The designer/manufacturer certainly maximized the full barrel potential here – it is more or less as long as the receiver, stock, and end-plate combined – would assume that for a pistol based platform this weapon punches well above its weight in terms of both velocity and accuracy. Likewise, the length of barrel relative to stock suggests a well balanced weight distribution – it is certainly very interesting weapon platform.

I completely agree. It’s my go to long gun in a lot of situations because of it’s convenience and versatility. I just wish that it was in a stronger caliber like Mauser 7.63×25, Tokarev 7.62×25, 10mm auto, or one of the big game revolver calibers. I’ve read that the action won’t handle anything stronger than .40 S&W in it’s current design. Though with the increased velocity from the longer barrel the ballistics equate to 10mm auto from a pistol length barrel. Which is a common entry level woods pistol bear gun.

There are three recoil management upgrades that I’m aware of to improve rapid fire accuracy. A heavy bolt, rubber washer dampener, and a muzzle brake/suppressor. The recoil is pretty mild to start with. But if you’ve shot a 9mm sub gun on full auto you know what cumulative rapid fire control issues are like.

This is the latest version with an internal sound suppressor and rotating forend so that it can be folded when optics are installed.
https://youtu.be/nWGJa-SMYK4

Should have done this on day one.
These are cia/soros funded domestic marxist leninist terrorists.

The mayor and city council are incompetent and subversive. They’re complete idiots who don’t belong in government.

Correct.
I hope you are aware that the takeover and fall of the Russian Empire in 1917 started out exactly the same under very similar circumstances.

“Sire, clear the square or adbicate”

The problem here with that analogy being that the Mob is an establishment golem that occasionally gets away.

Yes I know. That’s why I put the amount of time and effort into it that I did.

And apparently none of them have read a real history book – they think of themselves as subversive agents of social and economic change, but within their own self grandiose conception fail to understand they are mere pawns in the game – useful idiots. The sort that are invariably the first against the wall in the shakeout of any genuine and absolute societal revolution. Revolution is an abused word – every next marketing campaign claims to involve a (product/consumer) ‘revolution’ – so term revolution has lost impact of its real meaning – the complete and destructive overhaul of a social organization structure, with unpredictable, violent and chaotic outcomes.

It clear the movement have been coopted by the usual suspects..

The mayor and city council are complete morons. Most of the demonstrations were non violent and the police left them alone. When they turned disorderly and violent the police made arrests and quelled the violence. And then the mayor and city council accused them of using unnecessary force and started disarming the police, closed the police station, turned the neighborhood over to demonstrators involved in rioting and withdrew police, fire and medical services from the sedition zone.

The neighborhood was then overwhelmed with misdemeanor and felony crime that did many millions of dollars in damage. That turned the area into a live fire zone with regular shootings far beyond anything ever experienced there up to that point in history.

I’m not so sure that they’re morons. I’m reminded of that adage: “Give a man enough rope and he’ll find a way to hang himself.” I believe both the Democrats and Republicans are looking for ways to discredit this movement. What better way to show to the general population that these types are violent thugs with a little help from their agent provocateurs.

You have a valid point. Whether it justifies trashing out and terrorising a neighborhood with stray live rounds coming through people’s bedroom windows at night is questionable. But it may be part of the motive.

It looks like the mayor is doing something similar by allowing the ban on crowd control equipment and methods. Which in my opinion is a disaster waiting to happen:

“According to the ordinance, “no City department shall own, purchase, rent, store or use crowd control weapons,” including “kinetic impact projectiles, chemical irritants, acoustic weapons, directed energy weapons, water cannons, disorientation devices, ultrasonic cannons, or any other device . . . to cause pain or discomfort.” …

By sending the bill back unsigned, Durkan essentially said she disagreed with the ban but will allow it to go forward anyway.”

It will be weeks – possibly months – before high pressure hoses and disinfectants wash away the last of the filth, stench and detritus left behind by the stinking communard Mob.

This is the police station this morning after the mayor and city council trashed out and terrorized an entire neighborhood for the better part of a month unnecessarily.

Unnecessarily is an understatement.

Would not be surprised if the Mayor was offered some big coin from a NGO.
Soros thought he had his tempest to start a race war. Happy to see things cool down.

Well, I guess it’s plain to see why Democrats are incapable of fixing inner city violence. Most parents learn why tough love is beneficial for children once they have them, maybe that is another reason why the left is so big on killing unborn children-there is a learning curve that will never be experienced.

The city’s catch and release program is fueling the conflict. If these protesters that are getting arrested sat in jail for a while rather than being released quickly and having the charges dismissed, and had to go through court cases defending themselves from the charges. A lot of them would be less inclined to engage in rioting, anarchy and sedition.