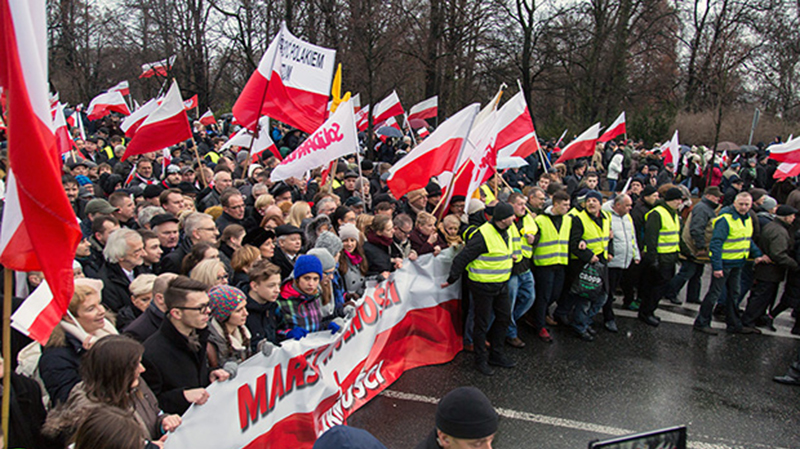 Polands threatens to become the EU’s main problem in 2016, according to Austrian Der Standard publishment. The winning party “Right and Justice” (translated from Russian translation of the original Polish name), that won the majority of votes in the Seim, is nowadays conducting a coup’d’etat, establishing control over all governmental institutions, including the Constitutional Court. The right-winged conservative orientation of Warsaw makes it remember old polish-ukrainian arguements and scores, and claim its rights on the historically Polish lands of Western Ukraine. Russia can “heat” the situation according to her own interests. Dividing Ukraine can help Novorossiya to separate, leaving only a dozen central regions under Kiev’s control.

The “Right and Justice” party under Yaroslav Kachinsky came to power last autumn and completely legally – as a result of democratic elections. After it received the majority of seats in the parliament, it, for the first time in the modern Polish history, formed a single-party government. And this time there was not a single Communist, Socialist or other left-winged party in the Seim. Polish President Andjey Duda – is also from Right and Justice. The total control received by the conservatives of the jurisdictional and executive powers made them to develop their success. According to the Seim-approved law the quorum of the Consitutional Court has been increased from 9 to 13 judges and the decisions will be made not by majority but by ⅔ of the votes. This way, the work of this highest law institution is de-facto paralised.

Right and Justice are “eurosceptics”. Their ideal – is a strong Poland with little influence from the EU, or, if possible with no influence at all. Factually, this is a Polish analogue to the French “National Front”. Also, what makes the Polish conservatives stand out, is their honest-to-god Russophobian attitude. In the setting of absolutely unlimited power, the right-winged conservative ideology will undoubtedly become the main Party Line of Polish foreign policy, and this means, old historical scores will be attempted to be settled, interests and claims of this formerly powerful European country will be revived, as it happened in history before. The neighbours of this new “Grand Duchy of Poland” should brace themselves.

Geopolitics is back on the menu

Polish ambitions were always grandiose. The four divisions this country lived through are living proof of this: only the aggressive defeated suffer such a fate. Nowadays, when the foreign policy is turning out rather nicely for the Polish, it seems, we are to expect some sort of a revanchist movement within Polish governmental circles. Poland is being backed by the “British world” with the U.S. in it’s lead, whose loyal European puppets are Warsaw and London (as yet another eurosceptic and EU’s critic). No longer wishing to serve Germany’s interests, the leader of new non-military eurointegration, Poland dreams of simultaneously play the role of one of the leading European states. This is where Right and Justice triumph’s roots are set.

This was already understood in the EU. Luxemburg’s Foreign Affairs Ministry’s head Jean Asselbourne called what is happening in Poland now “strange and scary”: in his opinion, the attacks on independence of courts, mass media and methods, which are used to do this, are a spit in the face of European principles. “The European Union must explained to the Polish government, without any delay, that you cannot do this”, – says Asselbourne. However, to do this to a legally elected government is unclear. The expulsion of Poland from the EU is not outlined in any of the allied agreements, is what Der Standard reminds us, meaning any threats are useless.

We must note, that Warsaw’s strife to play an increasing role in the international affairs was predicted in Stratfor’s analysis. In 2009 they were claiming that before 2020 Germany, Turkey, Japan and Poland will activate, all of these throughout history marked themselves with the thirst of expansion, but as the result ended up a subject or a satellite of a victorious nation. Demonstration of Merkel’s ambitions, political insanity of Erdogan, new Japanese militarism (that recently permitted the use of Japanese Self-Defense force to operate out of the country), and, last, but not least, ultraright conservative Poland – this is all a sign that the forecast was correct. Geopolitics is back on the menu.

Poland will of course be an antirussian and proamerican country. And this is why she probably won’t be too hostile to the antirussian Kievan regime. “Washington’s forepost” is a “forepost” for both countries. For now, this is so, however the nationalist regimes act out of their own logic. USA’s wishes will only be considered up to a point, and only until Polish interests are considered too. And a fundamental interest of all nationalists is a conquest of all historical “living space”. In the Polish case, this is Western Ukraine. Just a few years ago most analytics couldn’t even guess that something like this could become a reality. Maidan and its consequences weren’t foreseen either.

More to that, the map of a possible Ukrainian divide the Polish media demonstrated over a year ago. This is, of course, not the Sovinformburo (Soviet Informational Buerau, Soviet Union’s mass media organisation), we cannot take everything the Polish media says as an outright truth, but still, it is the sign of true intentions of the Polish government and Polish peoples’ attitudes. According to Polish nationalists, Poland must consume Lviv, Volyn, Ivano-Frankovsk, Ternopol, Rovnensk cities and their districts (oblasts). This isn’t surprising, consingering that Lviv is really a Polish city ethnically, that was given to the USSR in 1939 as per Molotov-Ribbentrop Pact. And although the Polish community has thinned out over the decades, the historical memory, especially of Polish-Ukrainian War of 1918-1919, has not dissapeared. This is why Poland was lobbying the creation of a monument to commemorate that war in Lviv “Lviv’s little eagles”. We can say the same about Volyn with it’s famous massacre.

This is also confirmed by the fact that “a Polishman’s card” is being widely spread in those regions. And it was being done for a while now – this law was passed eight years ago. It eases the access through the Polish border and is easily exchanged for a residence permit, overall it Polifies its owner. It really is a Polish passport in its own sense. Because it is unable to give out EU member’s passport just to anyone, Warsaw acts in steps. Already 140 000 Ukrainians own this card. If their interests will suddenly be under threat, Poland wil have a moral right to intervene.

Dreaming about the conquest of those lands, the Polish also thought about other lands and their historical ownership. Chernovitskaya oblast can be given to Romania. Zakarpatskaya – to Hungary. Russia will take back all of Novorossiya (that is all of Kharkhovskaya, Dnepropetrovskaya, Donetskaya, Luganskaya, Zaporozhskaya, Khersonskaya, Nikolaevskaya and Odesskaya oblasts, literalliy half of Ukraine) where the population is vastly ethnically Russian and Russian-speaking, and the economy is traditionally very dependent on Russian clientelle. And Ukraine itself will be left with nine central regions with Kiev as the capital: Zhitomirskaya, Khmelnitskaya, Vinnitskaya, Kievskaya, Chernigovskaya, Cherkasskaya, Kirovogradskaya, Sumskaya and Poltavskaya oblasts. These are historical lands of Kievan Rus. This way, Ukraine will keep all its territories, except those that were gifted to Ukraine the so-much hated in Ukrainian nationalist circles Russian Czars and Soviet leaders.

Such turn of events would be favourable for Russia not only because of Novorossian salvation, but also because of localisation of the insane Ukrainian nationalism in set boundaries. Even the rather ruthless Soviet government that was standing for internationalism in it’s good form couldn’t eradicate it, now, after twenty five years of “independence”, it, while fully stripped of statehood, is still dangerous as ever. If a small Ukrainian country will be created, in it’s natural borders, the lovers of Mova and Vyshivanka will be able to practice their fetishes without any harm to their neighbours, rightfully proud to belong to a Ukrainian nation, and, if they will pull it off, Europe.

The conditions to realise such a scenario or just about right. Nationalist turn in Poland is key. Through making a deal with Warsaw (or may be bypassing it, and talking as equals with the U.S. straight away, to save time), exciting Romanian and Hungarian (and may be even Slovakian and Belorussian) appetites, Russia could solve the Ukrainian crysis for good and for safety of all, including the Ukrainians themselves. But first and foremost for the good and safety of the Russian population of Novorossiya.

Hungary, Slovakia and Romania should also start to take back territories taken by URSS and gifted to Ucraine. Don’t know but Slovakia and Romania, but Hungary with Orban definitelly have the will and popular support for doing this. Let’s see the end of that artificially created “state”, Ucraine.

Here is a map to illustrate the article (clearer that way)

this will not be supported by us. the aim of us is to control the whole region from Baltic to black sea. sketched scenario is basically nullifying all us policy. us policy is to prevent a land bridge between Russia and Western Europe. Sketched scenarion would open 4 paths through 4 countries to realise the bridge.