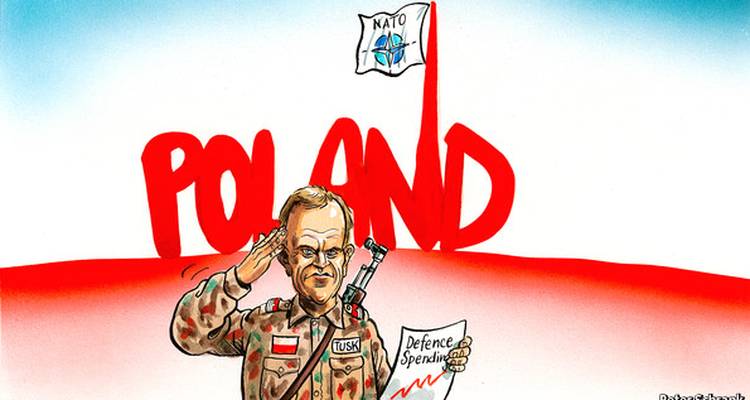 There are already over 3,500 American soldiers of the Third Armored Brigade and the Fourth Infantry Division plus some military equipment in Europe. The American and Polish military held joint exercises, which are part of the largest deployment of US military forces in Europe after the Cold War initiated by the administration of former US president, Barack Obama, to deter the “growing Russian aggression” in Eastern Europe. According to plans, these actions will continue for not less than nine months.

Polish President, Andrzej Duda, welcomed the deployment of the US troops in the country and described it as a “historic moment.” “Today we welcome our allies with open arms,”​​ Duda said, adding – “I believe that this military presence will strengthen our transatlantic relationship and our collective security.” Defense Minister of Poland, Antoni Macherevich, also addressed words of gratitude to the new US administration: “Today I know that Poland will not be endangered. God bless US President Trump,“ he said.

After completion of this stage of military training, the soldiers will be sent to Poland, Bulgaria, Romania and the Baltic states and the center of the “Atlantic determination” mission will be positioned in Germany. Earlier this month, 87 American tanks were delivered to Europe as well as 144 armored vehicles, “Bradley,” and about 3,500 troops as part of a cluster of military forces of NATO on Russia’s border.

Lieutenant General Hodges, commander of US forces in Europe, told reporters: “Poland will become the center of US military operations in Europe.” “We believe that an attack from the east is unlikely, but the deployment of these soldiers here makes it even less likely.” “The best way to ensure that there will never be an attack (from Russia), which I believe is unlikely, is to show strong deterrent capability,” General Hodges said.

All this happens within the first days of Donald Trump taking the post as president of the United States, who recently sent mixed messages regarding NATO. In an interview before his inauguration, he called NATO “obsolete,” but last week during an official meeting with British Prime Minister, Theresa May, Trump said that he stands 100 percent behind the pact. Meanwhile, in a telephone conversation with Vladimir Putin over the weekend, the new US president sent a message that a new Russian-American partnership is possible after the deterioration of bilateral relations under the Obama administration.

How much money is Poland spending on this adventure?

Poland likely not that much. Mostly west european coyntries though.

“We believe that an attack from the east is unlikely, but the deployment of these soldiers here makes it even less likely.” “The best way to ensure that there will never be an attack (from Russia), which I believe is unlikely, is to show strong deterrent capability,” General Hodges said.

Is that guy retarded?

About as retarded as Russian high command and Putin who follow the same strategy.

Btw, the recent large field exercise in Poland of some 5.000 men were comprised mostly of some 3.500 dutch soldiers, almost 50% (sadly haha) of our combat ready troops.

Recently we started to reinvest a little in our military and defense, buying ships, fighter aircraft and leasing (!) tanks from Germany.

Military spending should go up to 2% of our GDP, much lower than Russia but a start towards doubling our security spending.

Most European countries will move in the same direction.

Russia has its army in its own territory. Within their borders they can do what they want.

What is Poland doing though?