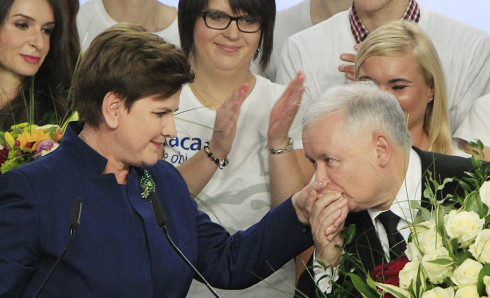 Conservative Law and Justice leader Jaroslaw Kaczynski kisses hand Justice candidate for the Prime Minister Beata Szydlo, left, at the party’s headquarters in Warsaw, Poland, on Sunday, Oct.25, 2015. The victory of his Eurosceptic party ends eight years in power of pro-EU, pro-business Civic Platform which voters accuse of being conformist, detached and focused on power rather than on improving the living in Poland.(AP Photo/Czarek Sokolowski)

The Sunday elections in Poland resulted in a stunning victory by the conservatives. Now all power in EU’s sixth largest economy belongs to Euroskeptics, which can’t help but worry Brussels and other EU members. Law and Justice party victory caused the greatest disappointment in Germany.

Nothing like that had happened in 25 years. For the first time since 1989 a single political party won enough seats in the parliament to form a government without a need for a coalition partner. The official results will be announced on Tuesday, but exit poll data indicates that Law and Justice won 39.1% of votes (242 seats in a 460 seat Sejm). The party won especially many votes in rural and poor regions of Poland.

Prime Minister Ewa Kopacz from the center-right Citizens’ Platform party, who is serving her final days, acknowledged the defeat and congratulated the winners’ leader Jaroslaw Kaczynski.

“We will set the law, but avoid retribution,” he said at a Sunday meeting. “We are not going to settle personal scores. We will not kick those who fell down on the job or due to a personal mistake.”

This without exaggeration new Poland will be remarkable in that there will not be a single leftist party in the Sejm for the first time in 26 years.  Poles have grown weary, after eight years of center-right government, of unfulfilled promises, high-profile scandals, and lack of engagement with their work. The Right had won thanks to simple but actionable promises. They were able to appeal to millions of Poles who feel the economic boom passed them by. It’s enough to say that L&J won by promising to increase social payments such as child benefits and to lower taxes on below-average incomes. They also promised to lower the retirement age and introduce new taxes on foreign banks which was also popular with the electoral base.

In spite of its conservatism, L&J remains a fairly balanced party. The harsh and direct 66-year-old Kaczynski is to a large extent balanced by the calm and soft 52-year-old Beata Szydlo who will become Poland’s next Prime Minister.

One of the new government’s most pressing problems will be the migrants. The old government promised to settle 7 thousand refugees in Poland, for which they were constantly criticized by the Right. It’s not clear what L&J will do, but it’s obvious that the refugees can’t expect anything good in Poland. Their gloomy future is testified to by Kaczynski who said that refugees would bring diseases into Poland.
Naturally, Kaczynski is not liked in Europe for his negative attitude toward the migrants whom he doesn’t wish to see in Poland, and his sharply euroskeptic political views.
Poland’s relations are at their worst with its eastern and western neighbors, Russia and Germany. Even though the border with Russia is small, along the Kaliningrad Region.
Berlin is not hiding its disappointment with the elections. It maintained good relations with the earlier government. Now that will likely change. And change for the worse. Poles can’t forgive neither Germans nor Russians their old historical offenses. Kaczynski and his supporters is unhappy with Berlin’s position on the migrants, and Berlin’s opposition to open permanent NATO basis on Poland’s territory in violation with the 1997 treaty between RF and NATO.

Then there’s the personal enmity of the “grey eminence”, as Kaczynski is often called in Poland, toward the Germans. The parents of Kaczynski brothers fought against the Germans in World War 2.

Germans, in turn, view Polish euroskepticism as “improper,” because nobody in Eastern Europe received as much cash from Brussels as Poland. Nevertheless, it would appear that Poles are set to start sawing the branch on which they are so comfortably perched.

L&J, for its part, believes that Germany is doing too much in Europe and want it to tone it down and apologize for past offenses.

UK, in contrast, is far away from Poland and Poles have fewer historic pretensions toward the British, but nevertheless London likewise carefully watched the elections. First of all, Poland is the 6th largest economy in the EU and the informal leader of Eastern Europe whose position has to be taken into account and, secondly, some 700 thousand Poles are working in the foggy Albion.

UK is also experiencing strong euroskeptic leanings, therefore while they didn’t necessarily view L&J victory in a positive light, they didn’t treat it as a tragedy either. There is a lot that unites Cameron’s conservatives and Kaczynski’s “crusaders”, including their negative attitudes toward migrants and Russia. It’s no wonder that the British PM supported L&J in the past.

Brussels, which is not just Belgium’s but EU’s capital, will naturally congratulate Kaczynski with his victory, but it will not be a very heartfelt congratulation. The European Commission is struggling to cope with the “extremist” and rightist Hungary headed by Orban whom many  on the right consider their kindred spirit. Now a second Hungary will appear in Eastern Europe in the form of right-tilting Poland whose president was likewise a member of L&J and who has not abandoned his views after entering the presidential palace. But in contrast to Orban who is considered an admirer of Putin, the new Polish rulers suffer from Russophobia.

Finally, the EU is so evil. It is just the latest Zionist invention to depopulate the indigenous tribal population, much the same way Zionist depopulated indigenous Russians from 1919-1933 through mass starvation and Jewish run Gulags. http://holodomorinfo.com/