Poland has called on EU countries to establish their own agencies to deter the so-called Russian propaganda and to prevent the spread of “positive information” about Russia.

“In its current shape, East StratCom group is not capable of effectively fighting misinformation, fake news and other manifestations of propaganda – at least on its own,” Polish Deputy Foreign Minister Marek Magierowski said that at a conference in Warsaw, according to BBC.

The official expressed confidence that such agencies are necessary “not only for busting the myths but also for effective spread of positive information.”

The East StratCom Team is focused on proactive communication of EU policies and activities in Armenia, Azerbaijan, Belarus, Georgia, Moldova and Ukraine and Russia itself. The project was launched to challenge what the EU bureaucracy descrobes as Russia’s disinformation campaigns.

Considerng that Poland officially calls to stop spread of not only “fake” news but also “positive” information, it becomes clear that the real goal of the EU effort is to censor truthfull information and independent media.

He said that China and Russia “are undermining the international order and stability. They’re ignoring the sovereign rights of their neighbors and the rule of law.”

According to McMaster, Russia pioneered “new generation warfare” and employs “subversion and disinformation and propaganda using cyber tools, operating across multiple domains, that attempt to divide our communities within our nations and pit them against each other, and try to create crises of confidence.”

He added that in own turn, China is engaged in “economic aggression” and challenges a global economic order that “helped lift hundreds of millions of people out of poverty.”

In other words, McMaster is concerned that China’s “economic agression” challenges the economic order that forced millions of people to become victims of the economic slavery.

One would think Poland should be more concerned with EU immigration rammed down your throat like it or not globalist propaganda than anything coming out of Russia. The powers that be running the EU to destruction seems to me to be far and beyond a more serious and immediate national security threat to Poland than Russia.

Makes sense, a rather rare ocurrence.

I think Poland should start behaving like an responsible adult and a sovereign nation and not like an American/NATO dormat and propaganda tool against Russia.

They can’t, first they need US because it gives them loans and secondly they want to become a hub for american gas in europe

Why? The other Nato countries are equally servile, especially Britain.

I think that vassal Poland was told by its Anglo/Zionist puppet masters to complain about Russia. The fact remains that Poland is one of the most corrupt and venal countries in Europe. Poland is so corrupt that almost the entire Polish youth had to escape to the west just to live. Sad.

So called “transition” countries adopted capitalism in the way that “new democratic” political elite grabbed all positions and all the capital from communist era.
Otherwise, Poland is not more corrupted than any other former one party system countries in Europe.
In fact, it is less corrupted then half of them, and some of the “old EU countries”, like Greece.

According to a pole among European countries, which one is the most smelly country, Poland wins first place.
Second places are, Croatia and Serbia, together with Romania. Third place is Montenegro, etc. as a stinkiest European septic holes.

Can you present this pole please? A link.

Check that out on fb travel advisor. I think that that’s still there.

Balkan countries are still adapting to EU standards and most of them are not even (as of now) an EU member. I have heard said that Albania, Kosovo and Bosnia are worst though. 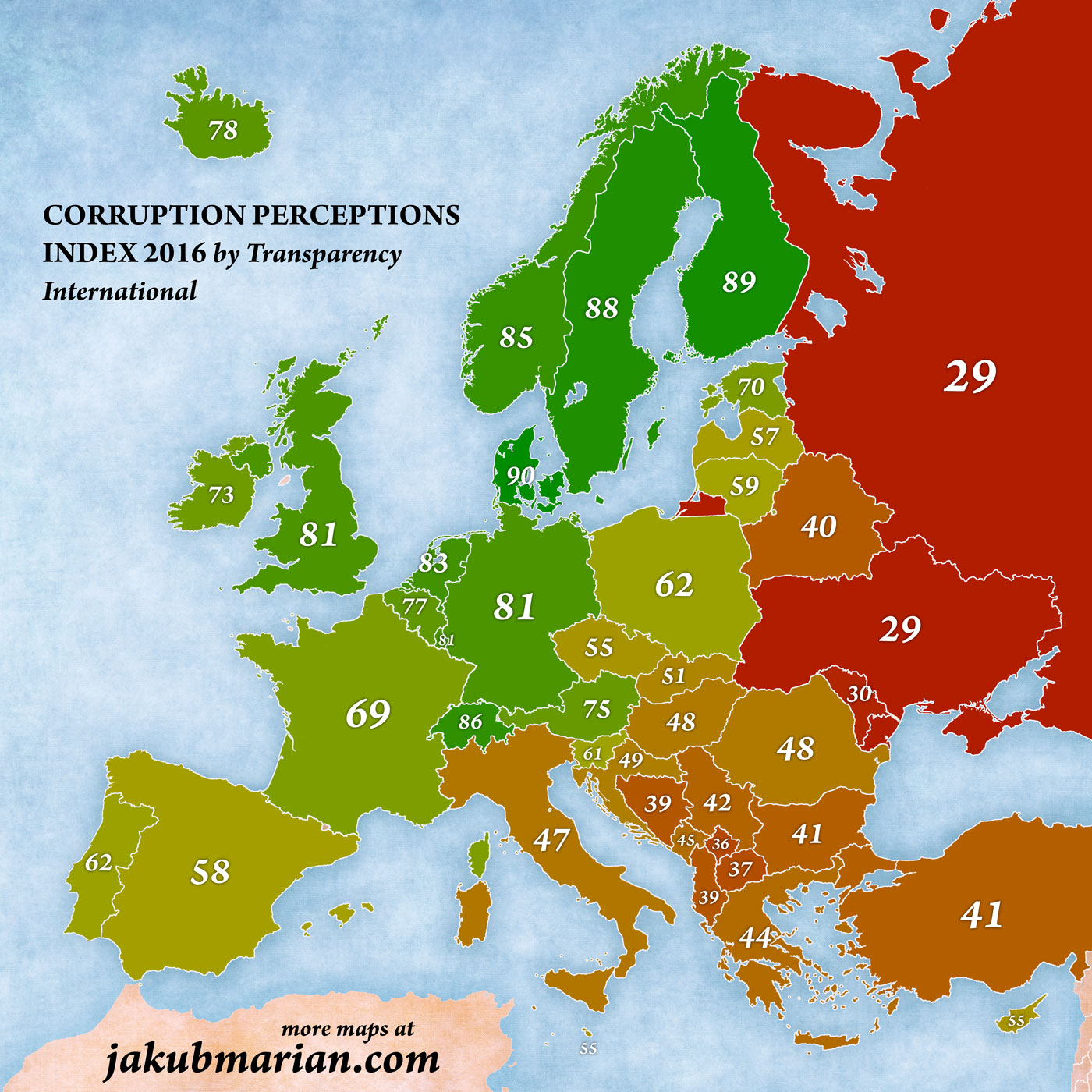 Like I said, Balkan is worst in Europe. Only Russia, Ukraine and Moldava being worse. Estonia is a very positive exception in its region.

Bosnia, for example have the most clean water in abundance of them all. But Romania is awful. Greece is okay, but it can be better. Maybe economic crisis have something to do with that.

I agree with that.

If green means bent as a nine-bob note then England is the right colour.

In fact many went because of the open EU borders as their wages there were much higher than, at the time, in Poland.

Many are now returning now that the living standards in poland have been improved.

As a Pole, I apologize for what “my” government is doing.

The Soviet critique of the pre-1939 Polish regime looks a lot less self-serving these days.

Why do you call Second Polish Republic “regime”?

It wasn’t democratic after the Pilsudski coup.

Yes, but with your logic almost all countries in Europe were a regime.

You agree that undemocratic states are fascist regimes then?

Of course not. The only fascist states were Germany and Italy, rest were authoritarian.

Hair-splitting nonsense; all states are fascist, the only differences are the people they kill and the lies they tell about it.

Propaganda at its best. Every country except Chechslovakia, UK, France and your beloved Soviet Union was fascist? Check structure of power and economic systems in Poland at this time.

The state is a fascist entity; Britain and the USSR and the USSA were states like any other and certainly not beloved by me. The second republic was murdered in 1926 because it’s electoral system was too difficult to reconcile with the needs of the fascist state, the machine by which the minority thieve from the majority. The same thing happened in Britain in 1931 and Germany in 1933-34.

black and white thinking.
you are democratic or fascist!
you are with us or against us? are you American?

Fuck off! I’m not that bad!* Black and white thinking has its place, especially when it comes to refuting statist apologetics.

*It’s about time someone asked me that back. ;O)

You mean the critique that gave them the “right” for the Molotov Ribbentrop treaty, dividing Poland once they were going to take it and did in 1939?

AM Hants
Reply to  dutchnational

Do you mean this?

Attrition47
Reply to  AM Hants

You are Pole as I am North Pole!

Polish “elites” where always like that – looking for master that will allow them to rule on their regional level. First it was Vatican, now it’s US country level elites. I think that this was the result of Sviatoslav destroying Khazarian Kaganat and lots of Khazarians flew in that direction. Interesting thing is that while official Poland seems to be most hostile against Russia but their people (many of them) feel warm towards those that they call “our slavic brothers”.

The Polish elites are either stupid/scared of CIA,
or they are US/German wannabes (couple examples: Tusk, Sikorski, and Brzezinski)
Shame the Pilsudski types won over Dmowski types.

As a non Pole I commend Poland on this subject. There can be said many things about Poland, both positive and negative. One of those things is that Poland, after having been a Russian colony in parts of three centuries (18th, 19th and 20th), understands Russia very well and is scared to death of imperialist Russia.

Absolutely disgusting how stubborn the Polish elites are.
And I say this as someone with complete Polish ancestry.

This antiRussian stance is so retarded. At least half the Poles want to lift sanctions.
Whether its the Tusk (Germanic puppet), or Sikorski (married to a Jewess) of Bilderberg, or Duda and the remaining twin sucking up to USA and Israel while pushing Iran “threat”.

They are all lunatics. I have 10 times more in common with Visegrad or Russia
than France, Sweden, UK or US.