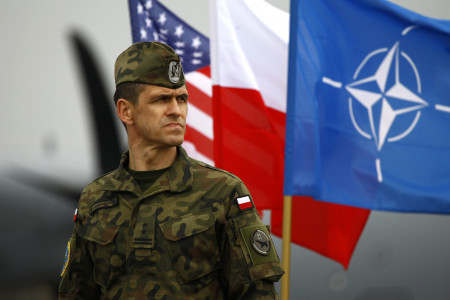 According to experts, Poland and Baltics are looking for “any excuse” to involve NATO in the conflict.

A deadly missile explosion in Przewodow, Poland, has recently raised fears about the possibility of NATO’s direct military involvement in the conflict. As the alliance’s norms provide that an attack on any of its members must be collectively responded to, debates began to arise around the possibility of calling NATO to respond militarily to the bombing on the border. Hours after the investigation began, the Polish and American governments concluded that the missile that hit Przewodow was of Ukrainian origin.

In theory, this conclusion should be enough to discourage any form of NATO hostility to Russia. Either the alliance should unite against Ukraine itself, since it is the perpetrator of the attack, or it should simply refrain from military responses, in case it was proven that the bombing was unintentional. However, the attitude so far has been different: NATO continues to blame Russia, despite the Ukrainian origin of the equipment.

Some analysts believe that NATO’s credibility is being severely affected by this case. The Organization increasingly seems to want to escalate the war at any cost, which is why it would be seeking to attribute responsibility to Russia for something that it evidently cannot be blamed for. This bellicose and extremely irrational anti-Russian position is stronger in the eastern European countries that are part of the alliance, such as Poland itself and the Baltics. These states have embraced the anti-Russian paranoia more fervently than the US itself, which is why they have incessantly clamored for NATO intervention.

This is the opinion, for example, of military expert and former US Marine Corps intelligence officer Scott Ritter, who spoke in an interview about the unjustifiable attempts by these countries to involve NATO in a direct war against Russia:

“Poland together with the Baltic states were screaming for NATO to consider Article 5 and Article 4 procedures – in effect asking, demanding that NATO interfere in the Ukraine conflict (…) This tells you that these nations, Poland and the Baltic states, are operating on a hair trigger, that they are leaning forward when it comes to seeking any excuse to escalate the conflict in Ukraine so that NATO gets involved (…) And indeed, it appears that even though it’s now acknowledged that the missiles that hit Poland were Ukrainian S-300 air defense missiles, the blame is being shifted to Russia by these and other NATO players who claim that these missiles would never have been fired if it were not for Russia’s military intervention in Ukraine. Therefore, Russia is to blame. And now they’re using this as an excuse to begin a larger discussion about air defense in Poland, air defense capabilities that would have the potential of reaching into Ukraine. So this in itself is an escalation”.

Scott Ritter’s words seem very accurate, considering there has been – and is still happening – utterly irresponsible agitation to bring NATO into the conflict. The narrative that Russia is to blame for the mere fact of starting its special military operation in February is obviously stupid and should not be used to try to justify military operations that put international security at risk. However, for some countries, such as Poland and the Baltics, what seems to interest them is making war against Russia at any cost.

The analyst also stresses the destabilizing role of the Western media. According to him, the big Western outlets work together with NATO governments to produce narratives that contribute to escalations in the conflict against Russia. For him, the media does not act independently or committed to the truth, but as an industry of false information, focused on developing justifications for the West’s anti-Russian interests. The aim is to blame Russia for all war crimes, territorial violations, civilian deaths and accidents, thus demanding foreign intervention.

“The media has long ago stopped asking the relevant questions. It’s not up to the media to wait for Poland to make a decision about the kind of missile that struck. The media is supposed to be able to carry out [an] independent investigation. Any expert on Russian military hardware could have seen, simply by looking at the debris, that these were S-300 missiles that belonged to Ukraine. This is something that the media should have reported and could have reported, but instead they got involved in the hype blaming Russia. Blame Russia first and then help turn that blame into an argument for intervention. The media was literally working with the Polish and Baltic authorities to try and manufacture a case for NATO intervention. You can’t rehabilitate that”, he said.

In fact, once again, military experts analyze the conflict rationally and point out the obvious reality: the NATO-Kiev axis acts in a destabilizing manner and threatens global security. The attitude of Poland and the Baltics needs to be condemned by international society and all forms of warmongering speech based on hate and anti-Russian racism immediately repelled.

Excellent article. Thanks for posting! The Clown wants to drag Europe into nuclear WW3.

USA is a shithole, EU is becoming one
Reply to  Max Schmidt

Not even the Poles would follow that mad man into such insane act.

Max Schmidt
Reply to  USA is a shithole, EU is becoming one

yes, but as he can’t win against Russia, he will keep trying to incite WW3 no matter what

NATO should end the conflict, as an ALLIED OF RUSSIA AGAINST UKRAINE, THAT HITS BOTH SIDES IN AN OUTBURST OF MADNESS!

Another fantasy story by Lucas Leiroz. Take a recent event, throw in some old theories, add some distopian visions and complain about russia-phobia.

They meant to hang the nordstream bombings on the Americans too, in order to force the fake regime into further involvement in the conflict including direct escalation.

If they do indeed drag us all to WW3, please nuke Poland and the Baltic Republics first, so that at least we have a few minutes of relief knowing those retarded twats are no more, before our own meeting with destiny.

Poland is a new leader of Slavic Brotherhood. ruSS traitors are doomed forever…

US and UK and Poland have been killing and genocide 6million of innocent peoples in The Middle East lol.

US and UK and some of NATO country are fool like donkeys,they expands NATO to eastern Europe and try to provokes and destabilizes and destroying Russia,it makes the risk for the world to nuclear war .

This is Zelensky broadcasting live from Kiev. We tried to involve NATO in a war against Russia once again but the US is not taking the bait. We are aware that the US would be the biggest loser in an all out war in Europe between NATO and Russia because Russia would turn western Europe to ashes. Then who will buy America’s weapons from its military industrial complex and who will buy America’s overpriced gas and oil if Europe is in ruins? Me and my colleagues are insane zionists we don’t give a flying fuck about starting a full blown war in Europe because tens of millions of white Christians will die so its a win win for us. I have to go now i just heard a kamakazee drone flying over my head. I’m high as a kite so maybe it wasn’t even a drone, I may have left my vibrator on. slava cocaina….

Just imagine the uncertainty of Russian leadership. Their entire army was smoke and mirrors, looted by corruption. They are backed up against the wall and they have no way out but the window. And the clock is winding down on the special operation. Such is life for men in power in Russia.

That Zelensky filth IS LYING AGAIN: he said Ukrainian experts will be part of Poland investigation. The president of Poland DENYS EVERYTHING!

ALL COUNTRIES MUST STOP ANY HELP TOWARDS UKRAINE!

RUSSIA IS RIGHT! UKRAINE MUST BE DENAZIFIED!

I hope that the NATO warmongers do not engineer WW3, but its one way for the EU to warm up in a millisecond, I suppose :)

NATO is a piece of shit a few thousand farmers defeated them and the yanks.