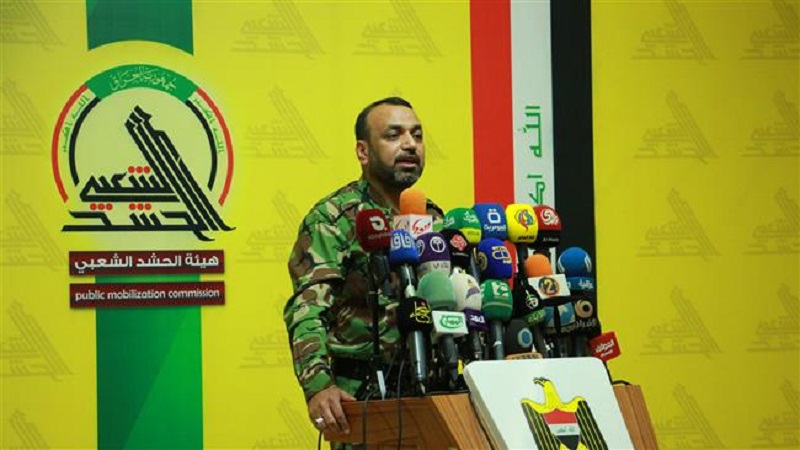 A spokesman for the Popular Mobilization Units (PMU), Ahmed al-Asadi, has announced that more than 355 ISIS terrorists were killed in 40 days of PMU operations in the western suburbs of Mosul and the vicinity of Tal Afar.

Separately, the PMU managed to kill three prominent ISIS members and capture a network of tunnels and trenches belonging to ISIS that had been used for infiltration attempts towards Mosul.

The PMU spokesman confirmed the PMU’s success in preventing ISIS militants from fleeing to Syria. The group also continues to provide a logistical support to the Iraqi Army in its operations inside Mosul.

From its side, ISIS announced yesterday a new attack launched by its fighters on PMU positions in Jabal al-Atashana in the western countryside of Mosul and claimed destroying of three armored vehicles during this attack.

On the other hand, the operations of the Iraqi Army in the Al-Tanak district of Mosul slowed down as the Iraqi Army was working to avoid some obstacles to ensure the security of civilians. The operation will be relaunched in the coming days.

Less than 10 a day, not impressive.

Its sort of impressive. A lot of the warfare is static, fights over villages, in some cases trench warfare. No one is really charging at the enemy because what would be left of your men wouldn’t be enough to survive a counter attack. The fight with ISIS is based on walling them off, surrounding pockets here and there, while hitting them with air power when they attempt to shift their reinforcements, and artillery to soften up their fortification prior to operations. You have to understand that we dont live in the days of the Persian empire, where a war meant that 100k people march for 3 month and then fight for an afternoon. That is not how it works. 10 fighters a day is 300 a month, thats 3600 a year. This is a significant attrition factor when you consider the fact that this is a small front where ISIS is not very active. Take the Palmyrra operation, ISIS used 5-12k fighter, lost 400 on the first day, pressed on and captured the city. When you discuss things in terms of impressive or less than or more than, you have to consider what you are comparing.

At a cost of 3 million per jihadi? No thanks.

You can do better.

The Syrian war it seems to me has been comical in one sense and only one sense. It seems to be the war in history where the fighters on all sides are least willing to die for their convictions, or should I say lack their of. It is almost like a game of emptying a magazine and then seeing how far you can run away. At the height of the numbers for Syria, they numbered around 70,000-80,000 troops. And at the terrorist height in numbers, they numbered 50,000-60,000 troops as I understand it. I bet a single group of World War infantry from either Russia or Germany or Japan numbering only 20,000 would have been able to single handily eliminate the combined Syrian 70,000 forces plus the terrorist 60,000 forces by themselves. That means 130,000 could have been wiped off of the map by only 20,000 Russian or 20,000 German or 20,000 Japanese troops. That is how pathetic the fighting has been I do not mean to be rude at all, and I do not like the killing at all. I am only speaking in a true sense of how wars have been traditionally fought as far as psychological and emotional convictions. The aim of both sides seems to be “fight until the last building still standing falls, then the war ends” lol. The Vietnamese in Vietnam fought the globalist-forces well with strong conviction. Heck, I even expected Iran to throw more man power into this, and they put so little in. It is to late, by the time they win,79% of Syrian building have already been leveled. Too expensive, to much money wasted. To many wounded, to many physiological scares. To much PTSD among the civilians and solders alike. Syria’s back has been broken,… Iran should have fought as convicted and as committed with their numbers as the Lebanese militias did.

Even though I dislike Marxism to the extreme, and I believe that Russians were the number one victims of Communism. I fully 100% respect the Russians of World War 2 as far as commitment, resolve and sacrifices go. It is such a shame that central Europeans and Russians fought at all. They should have united to finished off the UK-Empire and severed Frances colonies once and for all. And helped to free Northern Ireland from the occupying UK-forces. The UK-Empire brilliantly pimped the Germans and Russians against each other, then the UK went it for all of the spoils they did not deserve at all and after the UK suffered almost no casualties compared to everyone else. Typical British fashion. Next time lets all work together to bring down the UK and their old corrupt world they set up to begin with. http://ihr.org/