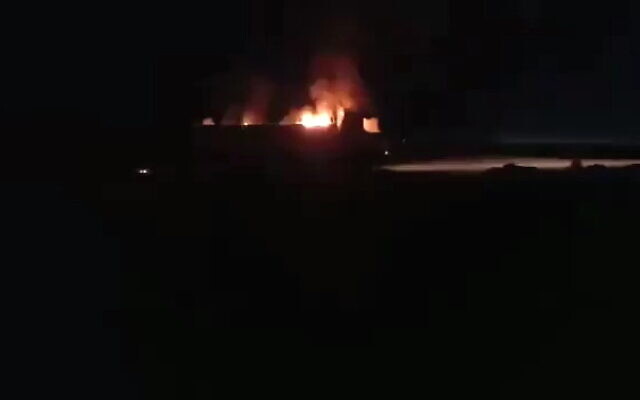 On September 14th, a Popular Mobilization Units (PMU) convoy came under attack by unknown aircraft at the Qasem border crossing between Iraq and Syria.

Sabereen News, a Telegram news channel associated with the PMU, said the attack targeted three vehicles carrying infrared monitoring equipment in the town of al-Bukamal in the eastern province of Dayr al-Zawr.

The news channel claimed the convoy was struck by four missiles fired from US F-15 fighter jets, and that the attack left no casualties.

Initial footage from on the ground this morning at the reported but unconfirmed airstrike(s) on the #Syria/#Iraq border last night. Shows at least two heavily burnt out trucks. Should help with some form of locating as well. https://t.co/cJ2uoZWQwu pic.twitter.com/NjbdTMbBDB

Footage shared on social media appeared to show at least two vehicles on fire, on the Syrian side of the border.

The Lebanese al-Mayadeen news outlet, which has ties to Hezbollah, said there were no reports of casualties in the alleged strike.

“Warplanes and drones directed four missiles at the headquarters of the Popular Mobilization regiments that are securing the Syrian-Iraqi border strip.”

The vehicles were carrying infrared monitoring equipment, which is used by the PMU and other counter-terrorism forces to prevent infiltration by ISIS terrorists.

The US military denied any involvement, with Army Colonel Wayne Morotto saying in a tweet that the US “did not conduct air strikes in al-Bukamal, Sept. 14, 2021.”

Back in June, the Pentagon conducted airstrikes against three targets belonging to Iraqi resistance groups along Iraq and Syria’s common border in the same area.

Pentagon Press Secretary John Kirby said the attacks took place in two locations in Syria and another in Iraq near the border, adding that the “precision airstrikes” hit “facilities” belonging to the groups of “Kata’ib Hezbollah and Kata’ib Sayyid al-Shuhada.”

The al-Bukamal region in Syria, near Iraq, is seen as critical to Tehran’s effort to establish a land corridor from Iran, through Iraq and Syria, and out to the Mediterranean Sea in order to more easily move weapons and fighters throughout the Middle East.

– “Police in Germany have arrested a German-Iranian citizen on suspicion that he exported €1.1 million of equipment to Iranian firms blacklisted by the EU for use in Tehran’s nuclear program.”

Actually, three PMU fighters died and some were injured. SF is not reporting the whole truth. Just a typical example of how the fanatical Shiites conceal losses.