Serbian President Aleksandar Vucic and Kosovo’s Prime Minister Avdullah Hoti met with US President Donald Trump at the White House to discuss normalizing their economic relations, two decades after a devastating conflict between them ended with a NATO bombing campaign against Serbia. In a move that seemed to catch the Serbian president by surprise, Trump announced that as part of the agreement Serbia will move its embassy in Israel to Jerusalem next July.

Israel and Kosovo will establish diplomatic relations with each other, while Serbia will move its embassy in Israel to Jerusalem. Both moves were announced during US-backed talks in Washington. In a related development, Israeli Prime Minister Benjamin Netanyahu’s press office announced the country’s recognition of Kosovo late last week, making Israel the 98th UN member state to recognize the former Serbian province. Kosovo, in turn, will recognize Israel, becoming one of only a handful of Muslim-majority countries to do so.

Last month, Trump mediated a deal between Israel and the United Arab Emirates that saw the UAE drop its decades-long boycott against Israel in exchange for a halt on the construction of Israeli settlements in the Palestinian West Bank. LINK

Aleksandar Vucic’s reaction when Donald Trump declared that Belgrade will move its Israeli embassy to Jerusalem next July made some people wonder if the announcement was a surprise to the Serbian leader.

Vucic visited Washington this week to sign a US-brokered deal with Avdullah Hoti, prime minister of the breakaway Serbian region of Kosovo.

Kosovo’s autonomous legislature declared independence from Serbia in 2008 in a move that split the international community. Among the permanent members of the United Nations Security Council, France, the United Kingdom and the US recognize the majority-Muslim region’s independence, while China and Russia do not.

The agreement was touted as a great diplomatic success for Washington. Among other things, Kosovo, a Muslim-majority entity, agreed to recognize Israel while Serbia agreed to move its embassy to Jerusalem. Trump twittered later in the day:

“Another great day for peace with Middle East – Muslim-majority Kosovo and Israel have agreed to normalize ties and establish diplomatic relations. Well-done! More Islamic and Arab nations will follow soon!”

The Serbian president’s reaction to the announcement, however, made some commenters wonder whether he knew the details of the document that he had signed. As Trump praised the pledge made by the Serbian government, Vucic looked sideways at his host, then flicked through the pages of the agreement apparently searching for the part where he had promised to move the Serbian embassy in Israel to Jerusalem.

Footage that certainly makes it appear that Vucic did not realize he had agreed to moving the Serbian embassy to Jerusalem — or at least not by July, Trump states. Comedy of errors. pic.twitter.com/0QlzmYM3GY

Adding to the confusion, Trump mistakenly confused the identity of his two guests and called Hoti the “president of Kosovo.”

The Trump administration first announced plans to recognize Jerusalem as the Israeli capital and move its embassy accordingly in 2017. The US and Israel have been trying hard to induce or pressure other countries to do the same ever since. Among the small number of countries that are following the move are Guatemala, Honduras and Malawi. LINK 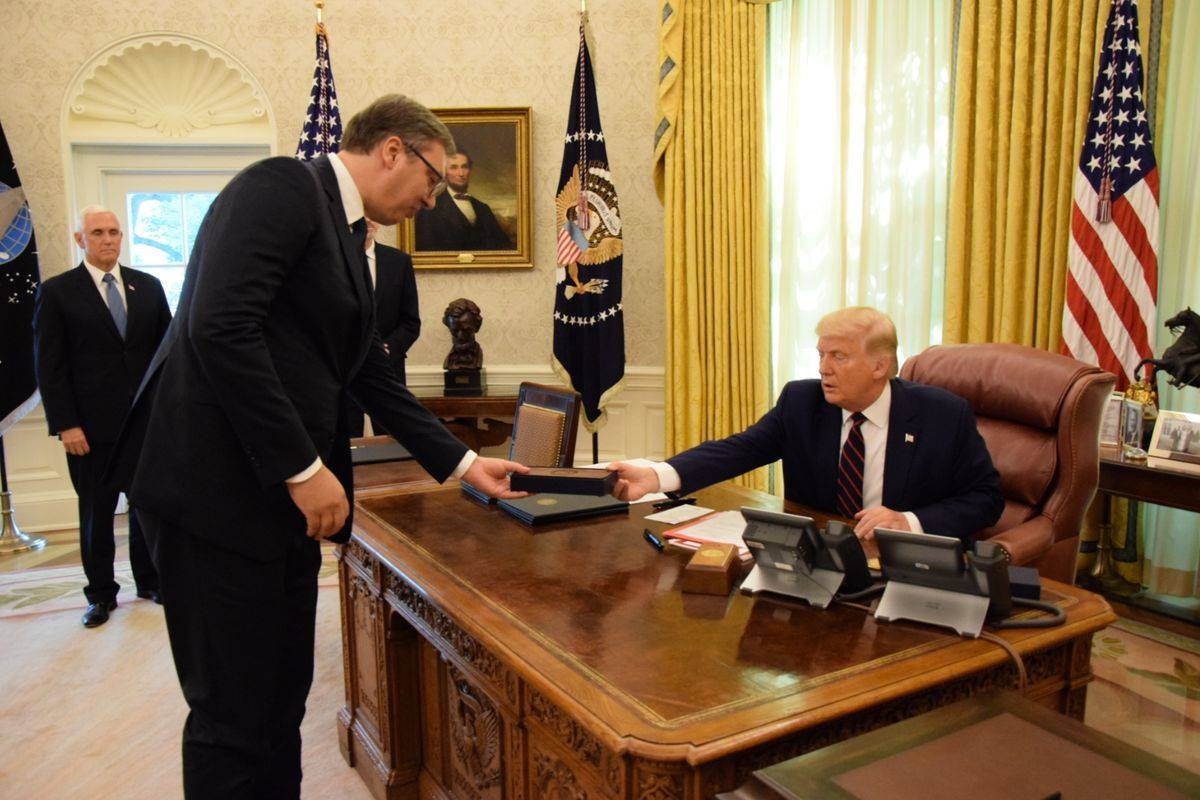 “Employee of the month” got a small gift for his service.

He shouldn’t be surprised, he loves the EU/NATO scum that turned Yugoslavia into a jihadi terrorist hellhole and then ripped it apart into a thousand pieces including Kosovo. It’s just hilarious that a Serbian president would let a Ziocorporate terrorist globalist representative like the US regime be the “mediator” between Belgrade and the US fabrication of Kosovo.

What are you mumbling you ignorant twat?!?
It is not question of “love” or preference or opinion !

He is just regular Western puppet just like all the other highest ranking Serb politicians before him ever since 1st color revolution 20 years ago!
Of course he goes there and of course he will do EVERYTHING hi is told to do!!
He has already betrayed everything he could.
And he would even betray more than he is asked if only if he could face anger of his own people after that.
One day he will pay all that with his miserable life!

That is very right. Anywhere Americans are in power Wahhabism is on the loose and rage.

Yugoslavia was never jihadi terrorist hellhole and only terrorists in it were Chetniks who attacked every single of their neighbors. Today Serbia doesn’t have good relationship with anyone, even Montenegro and that is telling.
It wasn’t EU/NATO who destroyed YUgoslavia but it was Milosevich and Serbian nationalism which is responsible for numerous crimes, from ethnic cleansing, shelling, concentration&extermination camps… It’s a long list. Blaming EU won’t remove the smell of rot.

Stupid Serbs took out the last president that actually represented them.

Yes, play dumb, great idea. That’s the best way to deal with selling Serbia’s sovereignty (selling it for basically nothing).

My thoughts exactly. feign an ” inocent ” mistake but tell your people that nothing can be done about because it was an offical, legaly binding signature. I hate traitor scum.

Another ” win ” for Putin. Remember all the talk about Serbia going over to Russia’s side ? What happened people ?

Russia gave 6 Mig29 to Serbia not long ago; Putin must be glutton for being backstabbed.

It seems so, although who knows ? At this point Putin got ” tricked ” by how many nations ?

When Vucic realized he got duped he should have ripped up the documents and walked out, that would have been the actions of a person who got tricked.

Who would be surprised if he was shown a ‘personal video’ starring himself. That was what Epstein was all about.

Trump helping Israel again. Be nice if he put some of that energy towards his country errr the USA.

he realized he just got scammed hahahaha

Vucic is coward and cunning Hypocrite hyena that will do anything to stay in power, even selling Serbia for fistful of whatevers.

Vucic is a dictator who is selling of Serbia by the day. HE MUST GO !!! 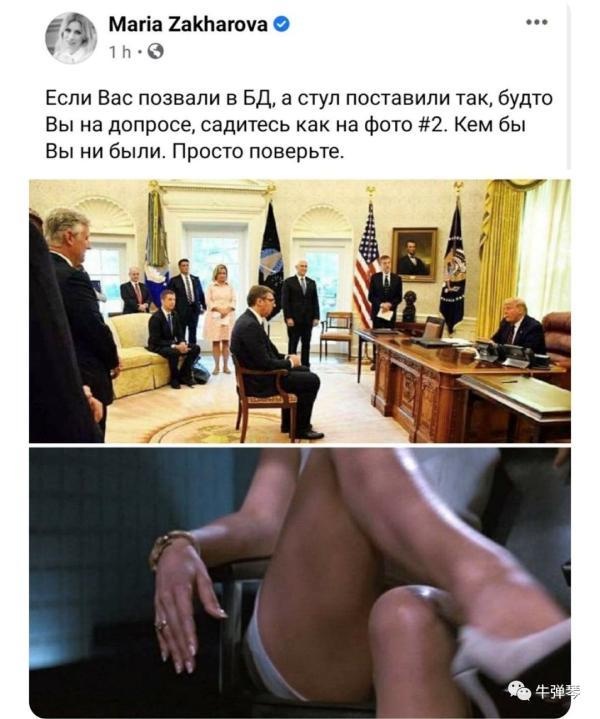 Better than being a Russian slave I guess!

Serbian politics and culture are polluted by remnants of 90’s war crimes which they supported.

Intelligence was not one of their traits, as we can see here. Not only this disgusting decision about Jerusalem but also ”gas sector diversify” (which means Russia wont be the main supplier any more) and 5G or telecommunications… Serbia agrees to follow Trumps lead against Huawei.

Mange:
Perhaps your parasites are infecting your brain?

Leave my brain out of it. Such comment just points out how shallow you are and how illiterate in this subject you happen to be.

No, you are anti-Serb and I won’t allow it.

Just another day and another crooked deal for the USadmin, which they will obviously break at some point.
Let’s hope that the Kosovo admin follow orders otherwise they could see their country split into factions by foreign usurpers and then bombed by the trigger-happy third world world self appointed police force.

There seems to be some problem in getting Jerusalem accepted as the new capital for the isreali apartheid regime. This agreement will be just another piece of paper. The USadmin is having major problems looking after their own future so one thing can be assured and that is Kosovo is way down the to-do list should they need future US support.

IMO, the whole thing was a PR psyop designed to put bums on seats in an apartheid Jerusalem. Some bums just needed a little push.

“Hoti the “president of Kosovo.” ”

Should have been more carefully – should have avoided the oval office. And don’t sign anything there…

No vagina mouth knew exactly what he was doing.

No I think I have him pegged. You don’t sign deals with the devil unless you are his.

That is exactly why you don’t trust or sign anything with the devil.

According to World’s Last Chance, both the Julian and Gregorian calendars are Pagan. Only the Lunisolar calendar can direct one to the true sabbath and avoid taking the mark of the beast.
worldslastchance.com/lunisolarcalendar/web/WlcWeb.html

Agreed, I use the calendar in the bible.

That is what the program at the URL calculates and displays in Lunisolar or Gregorian. The bible doesn’t contain a calendar, just the algorithm for determining it.