Amid Washington chatter about the future of US-Saudi relations, the kingdom has launched an unprecedented public diplomacy campaign to marshal business and grassroots support beyond the Beltway to counter anti-Saudi sentiment in the Biden administration and Congress.

To do so, the Saudi embassy in Washington has hired a lobbying and public relations firm headquartered in the American heartland rather than the capital. Iowa-based Larson Shannahan Slifka Group (LS2 Group) was contracted for US$126,500 a month to reach out to local media,  business and women’s groups, and world affairs councils in far-flung states. “We are real people who tackle real issues,” LS2 Group says on its website.

Embassy spokesman Fahad Nazar told USA Today in an email that “we recognize that Americans outside Washington are interested in developments in Saudi Arabia and many, including the business community, academic institutions and various civil society groups, are keen on maintaining long-standing relations with the kingdom or cultivating new ones.”

Saudi Arabia “carries significant economic weight and it influences the region. The world cannot do without Saudi moderation. Because of its economy, its moderation, and its cooperation in the war on terror… the truth is that you need us more than we need you,” Prince Abdul Rahman said.

To boost the Saudi public diplomacy effort, the King Faisal Center for Research and Islamic Studies (KFCRIS) in Riyadh this month armed LS2 Group with a 32-page report, entitled ‘The US-Saudi Economic Relationship: More than Arms and Oil,’ that highlights the kingdom’s investments in the US, commercial dealings, gifts to universities, and purchase of US Treasury securities.

The report noted that US$24 billion in US exports to Saudi Arabia in 2019, $3.1 billion of which were arms sales, supported 165,000 jobs in the United States. US companies were working on Saudi projects worth $700 billion. The report said the kingdom held $134.4 billion in US Treasury securities and $12.8 billion in US stocks at the end of 2020 while US investment in Saudi Arabia in 2019 totaled $10.8 billion. It touted future investment opportunities in sectors such as entertainment where US companies have a competitive advantage.

In reaching out to the American heartland, Saudi Arabia hopes to garner empathy among segments of society that are less focused on foreign policy and/or the intricacies of the Middle East than politicians in Washington and the chattering classes on both coasts of the United States.

US President Joe Biden criticized Saudi Arabia during his election campaign in stark terms, calling the kingdom a “pariah.” Mr. Biden, since coming to office has halted the sale of offensive arms to Saudi Arabia that could be deployed in the six-year-old war in Yemen, released an intelligence report that pointed fingers at Crown Prince Mohammed bin Salman for the 2018 murder of journalist Jamal Khashoggi, and said he would “recalibrate” relations with the Gulf state.

The Saudi public diplomacy campaign comes as Mr. Biden is under pressure from liberals and left-wing Democrats to sanction Prince Mohammed for the Khashoggi killing, define what he means by offensive arms sales, and potentially maneuver to prevent the crown prince from becoming king.

Prominent among the speakers LS2 Group rolls out is Saudi Arabia’s glamorous ambassador to the United States, Princess Reema bint Bandar, the kingdom’s first ever woman foreign envoy, a great granddaughter of its founder, and the US-raised daughter of Prince Bandar bin Sultan who was ambassador in Washington for 22 years.

Long active in the promotion of women’s sport, Princess Reema hopes to convince her interlocutors that Saudi Arabia as a pivotal global player is an asset to the United States that has embarked on far-reaching economic and social liberalization, including the institutionalization of women’s rights.

It is a message that is designed to put the kingdom’s best foot forward and distract from the kingdom’s abominable human rights record symbolized by the Khashoggi killing and the Yemen war.

Houthi rebels this week cold-shouldered a Saudi proposal for a ceasefire that would partially lift the kingdom’s blockade of the war-ravaged country.

If successful, the public diplomacy strategy could lead to grassroots organizations in Congressmen’s districts leaning on their political representatives in Washington to adopt more lenient attitudes towards the kingdom.

It would be a message that is aligned with positions adopted by the Israel lobby, various American Jewish organizations, and other pressure groups supportive of Saudi Arabia.

“There was a huge message of change and progress. That is … not much reported in the newspapers here… (Princess Reema) had all her data points about Saudi Arabia’s impact, opportunity and connections to Pennsylvania” that include links to the state’s energy industry, Ms. Swartz said after the ambassador addressed her group on Zoom.

“Being an oil country and Alaska being an oil state, it’s interesting to hear their perspective on gas and world markets and living in the neighborhood they do – and her being a woman,” Ms. Falskow added.

A 10-page glossy booklet produced by the LS2 Group in advance of Princess Reema’s appearances emphasized the kingdom’s “great progress in the area of women and sports.”

Replete with pictures of women athletes, some with headscarves, some without, the publication highlights their achievements as well as significant policy changes and incorporation of women in sports management as part of Prince Mohammed’s reforms.

The public diplomacy strategy counts on Middle America being less tuned into other aspects of the crown prince’s rule.

This would likely include this week’s sentencing of Nassima Al-Sada, a prominent Shiite women’s rights activist, to five years in prison, two of which will be suspended, according to a allegedly Qatari-backed, London-based new outlet. The suspension means that Ms. Sada, one of 12 women campaigners who were arrested in 2018, could be released at the end of June.

The LS2 Group-arranged engagements outside of Washington contrast starkly with high-brow webinars hosted by Washington thinktanks in which a revolving number of former administration officials, scholars and analysts debate what US policy towards Saudi Arabia should be. They usually split down the middle on whether the United States can afford to be tough on Saudi Arabia and Prince Mohammed on issues such as human rights.

Even so, if public opinion polls in recent years are anything to go by, Saudi public diplomacy faces significant challenges. Gallup concluded last year that 65 percent of Americans viewed Saudi Arabia unfavorably as opposed to 34 percent favorably, a trend that was also evident in surveys by Business Insider and YouGov.

Recognizing the hurdles, Princess Reema appears to be following her instincts by focusing on a “comprehensive partnership” with business, culture, and education.

With US activists taking credit for mounting pressure that led to Congressional censoring of US support for the war in Yemen and Mr. Biden’s suspension of arms sales, Princess Reema appears to hope that Middle America will be her secret weapon.

In other words, Middle America may be the latest battlefield, but ultimately Washington politics will determine the kingdom’s image in the West and the future of US-Saudi relations.

Dr. James M. Dorsey is an award-winning journalist and a senior fellow at Nanyang Technological University’s S. Rajaratnam School of International Studies in Singapore and the National University of Singapore’s Middle East Institute as well as an Honorary Senior Non-Resident Fellow at Eye on ISIS

The corrupt House of Saud is in trouble and it has now hired half the Jew media companies in the US to “polish its image” in the ignorant middle America who are clueless about the next state, let alone a desert family run headchopper kingdom thousands of miles of away. 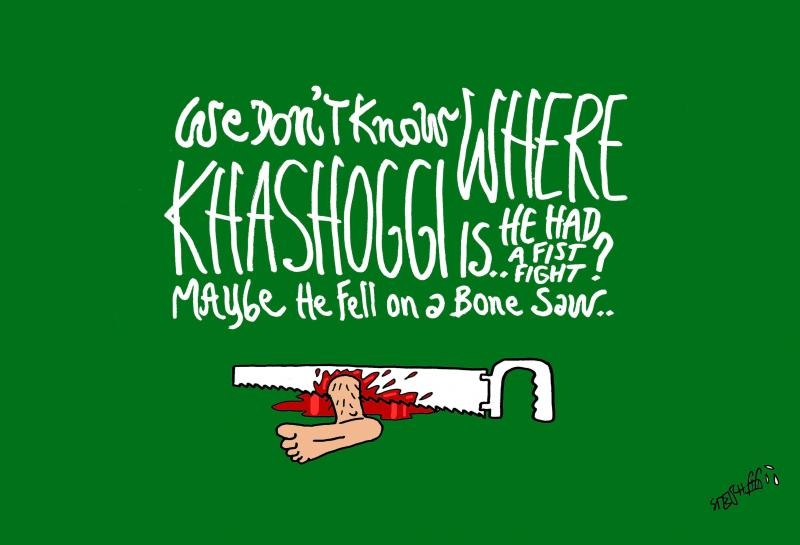 The US and Wahhabi regimes are so corrupt that it is difficult to find worse, leaving aside Isisrahell of course.

My theory is that Zionism, Capitalism, and Wahhabism are three legs of the same cooking pot. Each of these three find commonality in profiteering through extreme greed, including barbaric warring such as killing helpless victims after they have shown no lethal threat.