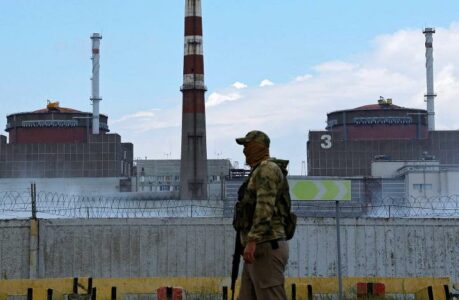 On the morning of September 1, the Kiev regime attempted a provocation to disrupt the arrival of the IAEA group of experts at the Zaporozhye nuclear power plant. Early in the morning, 2 barges and up to 30 boats of the Ukrainian landing force attempted to force the Dnieper River but were stopped by the soldiers of the Russian Guard and army aviation.

The first photos showing the destroyed military barge of the Armed Forces of Ukraine were shared online. 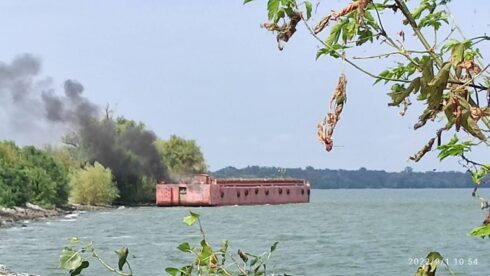 The satellite images confirm that more barges were docked on the western outskirts of Nikopol, in the village of Kamenka.

The Russian Ministry of Defense reported on the situation:

At 6:20 a.m. on the coast of the Kakhovsky reservoir, three kilometers northeast of the Zaporozhye NPP, two sabotage groups of the Armed Forces of Ukraine with a total of up to 60 people were landed on seven high-speed motorboats. Sabotage groups were discovered and blocked in the landing area by units of the Russian Guard guarding the territory of the Zaporozhye nuclear power plant.

To prevent an attempt to infiltrate the nuclear power plant and destroy Ukrainian saboteurs, a unit of the Russian armed forces arrived to reinforce the servicemen of the Rosgvardiya, and army aviation helicopters were also involved. Currently, the destruction of the Ukrainian sabotage group is being completed.

At about seven o’clock in the morning, units of the Russian armed forces stopped another attempt to land troops to seize a nuclear power plant. A few kilometers from the Zaporozhye NPP near the settlement of Vodiane, an attempt was made to land a tactical landing of the Armed Forces of Ukraine on two self-propelled barges that left Nikopol. As a result of fire damage by the Russian armed forces, two self-propelled barges with tactical landing of the Armed Forces of Ukraine were sunk.

Despite the attempts of the Kiev regime to disrupt the arrival of a group of IAEA experts at the Zaporozhye nuclear power plant, the Russian side confirms its readiness to accept them with full safety of further work. The situation in the area of the nuclear power plant is difficult, but remains under full control.

british trained according to rt reports,apparently london still believes in hollywood and keeps finding idiots that feel the same, the problem being their not bullet proof, they cant dodge bullets, and the bullets don’t bounce off and despite how hard they believe they cant overcome incompetence and stupidity.what a mess.

Some of the Bitches were captured which is good news,get the info from them then execute the bastards.

I would think that the Barge’s were transporting the Ukie occupation Plant force that the dumb Ukies died for.

Such a potty derring-do plan by UK Ruperts was doomed to fail.

For those from other countries, a Rupert is a childish British commissioned officer.

I thought he was an effeminate middle class bear from childrens TV. Much like Paddington bear.

Where are they though? Also 60+ soldiers dead oand no vídeo? They came all in that barge with no motor/power?

Dead, and the barge was self propelled.

So no video, nothing?

Where are they though? Also 60+ soldiers dead oand no vídeo? They came all in that barge with no motor/power?

Joe Bidet Is A Senile Pedo
Reply to  Yuri

He is busy having surgery to become a trans black dwarf!

Where’s James Bond when you need him?

honestly speaking, it was clear from the start that it would have turned into a tragic unsuccess. I wonder how the ukrosoldiers can still have faith in their upper command…it may be due to the low cultural level of the reservists that form now the majority of the ukro-army

Subhuman nazi trash being destroyed on mass in their idiotic Hollywood-inspired missions of glory lmao. Russia is doing humanity a MASSIVE favor by wiping out these American and UK mercenaries.

At first I felt bad for Ukrainians. Now that they’ve become obedient, goyim slave, cannon fodder, I hope they get minced like hamburger, the more the merrier. Slava Putin. Slava Bashar Hafez al-Assad.

A pink barge. Are you fucking kidding me. PINK. Was mercenary Ashton-Cirillo the motherfucker Admiral of this ship?

It has got to fit in with the Pride Parades. Surprised they did not have a Rainbow Barge.

It’s just as well that the bbc is doing all of Ukraine’s PR and war reporting because they know how to spin failure. They have been doing it for gov’t lackies for years.

Hahahahaha stupid hohol idiot’s, I dont get why Russia doesn’t at least capture zelensky, if they dont want to kill him, at least stop him from continuing to make stupid decisions

If an enemy is making stupid decisions, as Jewlenski does on a daily basis, it would be unfair to stop him :)

I don’t know, we can see the same barge on google earth, must have been there for a while.

The failure of the Ukrainian counteroffensive in Kherson

Those fake jew anglo-zionist shit will never stop attacking Russia by any means. Theirs stupid goal is to bleed it till unconscious then to apply the same almost historical bandit schema placing it’s new Eltin puppet in Kremlin and devour entire country assets, beginning with the finances and finishing with the partition of Russian Federation based on a fucked sponsored and controlled ethnic frictions, on the same scenario worked in many places around the world. They are Satan vectors of terror and crimes from ages. Hope Putin will UNDERSTAND AT LAST that with those devils it is impossible to play fair and start punching them hard right in the vital spots. First, closing the fake jew emigration ‘Biro’ and expelling the shekelist ambassador from Moscow.

The video only shows smoke. Anyone can make smoke. There is 20 barges and Russia claim they shot on 2. Is this fake news or an attempt to impress people?

Why not all barges destroyed?

Steven Speilburger has been filming this conflict and getting footage for his next movie hit production “Zelensky’s List”.

Sounds like a false flag story by the Russians. The Russians even went so far to publish grainy video footage of a helicopter strafing an old bridge support on the eastern side of the Kakhovka Reservoir of the Dnipro River (close to the nuclear facility) and claim is was a Ukraine barge with military personnel aboard.