Activists said the battle tanks, several T-62MVs and at least one T-62M, were supplied by Russia because they carried “Russian markings” which were spotted before in Ukraine and Syria. Tanks with similar markings were seen before with the LNA in Libya.

#Russian T-62MV tanks in the hands of #LNA , not the first time that i found proof of russian equipment in #Libya given to #Haftar directly , recently a whole batch has been recolored to saharah camo others are still green fresh from mother #Russia .#Libya pic.twitter.com/Ifkp41YBTe

The T-62MV is an upgraded variant of the T-62 with the Kontakt-1 explosive reactive armour, ERA.

While Russia may be the original source of these battle tanks, this is not certain. Other countries which are purchasing older weapons for the LNA may be responsible. 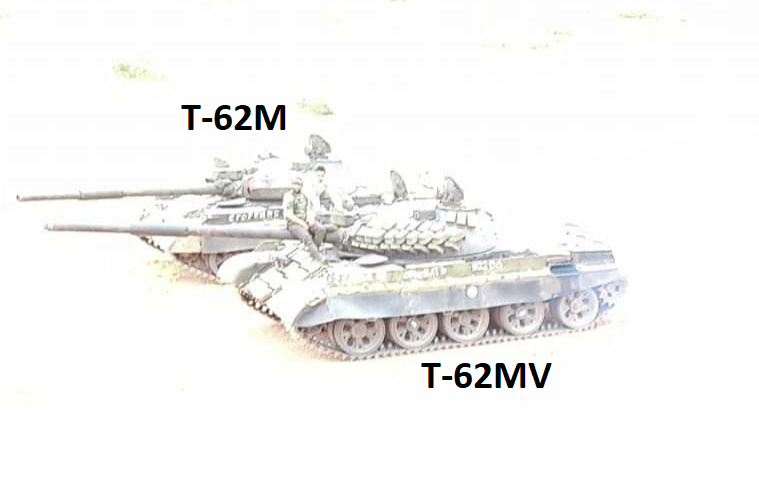 Egypt supplied T-55s battle tanks for the LNA in the past. One of the tanks, a variant developed by the Egyptian military, was seized by forces loyal to the Government of National Accord (GNA) in May.

Furthermore, recently it was revealed that the UAE supplied the LNA with Serbian-made LRSVM Morava modular self-propelled multiple rocket launchers.

Regardless of the real source of the battle tanks, the LNA appears to be increasing it offensive capability. The LNA is likely preparing for a new round of clashes with forces of the GNA, which recently received an increased support from Turkey.

Good ol T-62 still kicking ass. Russia has tens of thousends of these laying around so why not.

That cover tho, what is with Putin’s face lmao

The Red Effect guy is Russian. Pretty sure he likes Putin, but he’s very critical of Russian tanks as well as every other tank in the world. If you want to know a weakness in a tank, he can tell you.

The best defense is an offense, if the sky is closed, tanks can not be targeted from above and that is already a big relief, reactive armor on the sides and you’re ready to go

Yup. And Kontact-1 is not a bad decision. Most RPG rounds are single-charged. ATGMS which feature a lot of tandem shaped-charges are much more expensive by comparison. Tank-on-tank battles featuring APFSDS are rare.

yeah i wasn’t sure, but he’s VERY thorough, and pulls information from Russian sources. But he could be Serbian. it would explain his affinity for Russia.

Point is, they have Kontakt-1 which is not that great. See below.

But, the story, is obviously complete BS. At first those Soviet T-62 [of all variants] floating around all over ME, North Africa, Central Asia and probably in every former Soviet Republic ect. Than they are some spotted in a conflict in North Africa [Oh surprise] and than some guys shouting Russia Russia just to give the ‘Impression’ that Russia is involved…it’s complete Horseshit…it’s called fabricating a ‘Narrative’.

Increasing fire power and mobility for LNA is a plus, air superiority and EW are critical.

Much better than your never going to happen tank production program of Altay… ?

You can never know the future..but ı prefer buying tank from someone not trying to produce whwn you dont have know-how of engine and transmission.. Even it happens it will be extremely expensive…

Got shafted by both Koreans and Americans i see.

+Germans..even the south koreans apply for Germans when things get complicated in transmissions+tank gun..

If you guys want a very good source for all the details on Soviet/Russian tanks, Check out “Red Effect” on Youtube; Russian kid sounds about 14 years old but gives every single detail on Russian tanks; including all upgrades, which relate to optics, targeting software, cannons, explosive reactive armor (which varies a lot), engines, armor type and thicknesses, etc. This is not a promotion, I just subscribe to the channel.

T-62’s should get Pantsir mobile support. No point moving the heavy armour without such support.

They definitely need AA support, but a Pantsir is about 10x or more the price of a T-62. Maybe more. These are great AA systems, but they’re not cheap. they are in the 5 to 10 million dollar range. T-62s have got to be in the low hundred thousand range by now. Russia has a ton of older AAGM systems that also might be suitable. i guess it just depends on what they are facing. Do you know what aircraft they are facing??

JIMI JAMES
Reply to  Me&Myself None

Atleast theres survival and most cases easily fixed to get up and running again unlike the wests whoms ripp off the floor pan,let alone easily rip them open,target practice maybe not all drones hit their mark either,infact vewry low hit rates!

Lone Ranger
Reply to  Me&Myself None

Turkisis drones can only operate if air defenses are offline.

Meh… just some warmed-over T-62’s. Not much really.