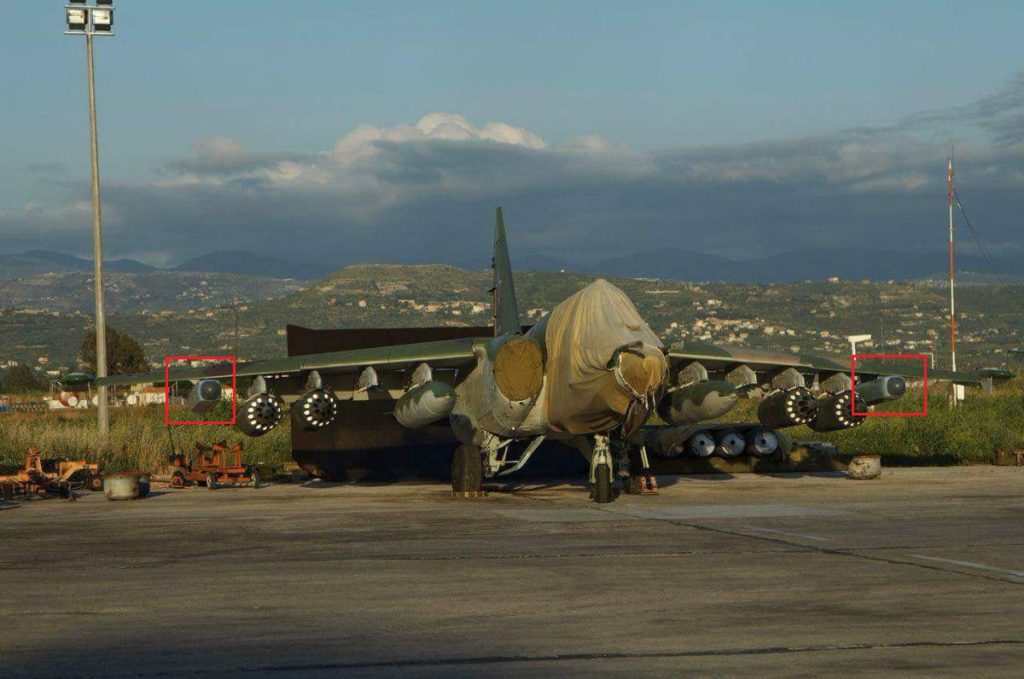 A first clear photo of Russia’s Su-25SM3 attack aircraft in Syria has appeared online. The photo was made at the Khmeimim airbase in April, 2018. The Su-25SM3 is a deeply modernized modernized version of the Su-25, which entered service with the Russian Aerospace Forces (previously known as the Russian Air Force) in the early 1980s.

Su-25SM3 version differs significantly even from upgraded Su-25SM strike-fighters. The Su-25SM3 incorporates a host of sensor and defensive systems upgrades. The core of the modernization package is the Vitebsk-25 EW system, avionics, and weapon control systems.

The Vitebsk-25 includes an L-370-3S digital active jamming station. It can locate the likely enemy’s azimuth and the radar emission type as well as suppress the signal in different frequency ranges. It also poses protective measures against various missiles. External elements of the L-370-3S digital active jamming station are marked by red squares.

The Russian Aerospace Forces actively use Su-25SM(x) attack aircraft in order to provide a close air support to government forces combating militants across the country.

3 more Syrian MiG-29 were parked to the south on the new runway connector. also visible that HESCO-like barriers were set up at the planes parking spots pic.twitter.com/nWfmLuLcQs

How are these different from the Phantasmagoria pods?

ready for Daraa and Deir-ez-zor

russian protection is a joke.

get lost foolish troll… your satan yahoo is a bigger joke.

If it weren’t for Russian bombardments, Syria would be under terrorist control today, so kindly go fuck yourself.

Israel just flattened more Syrian targets, Russia had nothing in their arsenal to deflect even a single Jewish missile. Russians have already been defeated by the Jewish Master Race. http://ihr.org/

Thanks for your ref:) There is particularly a very good article of a former head of Britain’s Special Forces who has challenged Theresa May’s claim that President Assad was behind the chemical attack in Douma: http://www.dailymail.co.uk/news/article-5616533/Former-head-Britains-special-forces-says-Assad-doesnt-need-use-gas.html

Alex B
Reply to  Valery Grigoryev

200 SAS UK officers from 22 Airborn got captured by SpetsNaz in Ghuta and handed over to Assad. That is the reason.

The fact that the Syrians are storing assets at Russian bases suggests that it’s all about to kick off.

Those Syrians had better start making revetments to store the aircraft in, preferably with some type of roof.. and not park in the flight path of the runway.. Either side would be better. My point is that if one is to take advantage of one’s host’s hospitality, one should return favor by providing value. . Wars are won by proper logistics.

Interesting….Su-25 is a close air support jet, but Su-25SM3 has been set up to take out enemy air defense from a low altitude. neither ISIL nor the rebels have any air defenses! Since its only one, my money says: “its being combat tested”

Perhaps it could detect the location if it is locked on by enemy manpads?