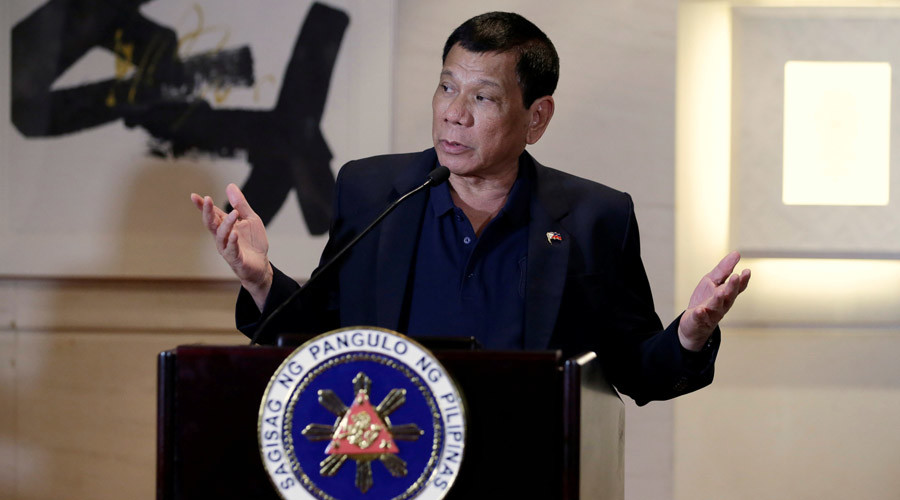 President of the Philippines Rodrigo Duterte attends a news conference during his visit in Beijing, China, October 19, 2016. © Jason Lee / Reuters

It’s “time to say goodbye” to the United States, said Philippines President Rodrigo Duterte on a visit to China, where he and President Xi Jinping are turning the recently-frosty tide with bilateral agreements, while Washington now gets the cold shoulder.

Duterte spoke to the press in Beijing on Wednesday, on the eve of talks with Xi. There was scant information about what was to come on Thursday, but Duterte’s conference coincided with talk of unprecedented agreements being written up – particularly the granting to the Philippines the use of Scarborough Shoal territories – a disputed resource-rich area in the South China Sea.

The firebrand Duterte has been slowly edging away from Washington after coming to power in late June. A series of spats and heated remarks finally resulted in his making good on the promise to mend ties with historic rival, China.

“Your stay in my country was for your own benefit. So time to say goodbye, my friend,” Duterte said, as members of the Filipino expat community in Beijing listened in the audience. He was of course referring to the military presence enjoyed by Washington at a number of Filipino bases – something he’s been particularly vocal against since September.

“I will not go to America anymore. I will just be insulted there,” he added, before doing something no political analyst thought a world leader would ever do once, let alone twice: calling US President Barack Obama a “son of a whore” again.

US-Philippines relations have been in a death spiral ever since the Obama administration started voicing concern over Duterte’s tactics in dealing with drug crime. Manila didn’t like Washington’s stance one bit, and Duterte issued a series of fiery remarks warning Obama to stay out of it and stop dictating Philippines policy.

He’s been touting the economic and political benefits of a relationship with China ever since.

“What kept us from China was not our own making. I will charter a new course,” the Philippine leader said as quoted by the PhilStar.

The two countries are expected to sign over two dozen of agreements, including the above-mentioned South China Sea concession – a massive step for China, which was defiant in the face of a Hague court ruling in July, dictating that no one could be the sole claimant of the territories.

Infrastructure takes particular precedence for cash-strapped Manila. There is also energy and communications deals being worked out, including a $3 billion credit from the Bank of China, according to Trade Secretary Ramon Lopez, as cited by Bloomberg in Beijing.

“I will not ask but if they offer and if they’ll ask me, you need this aid? Of course, we are very poor,” Duterte confirmed. “You need this railway? Yes sir. And if you can give us a soft loan, give us something like 20 years to pay.”

This break from the US comes after 65 years of close partnership. Expanding US presence in Asia via the Philippines has been one of the pillars of Obama’s regional policy, along with keeping troops in Okinawa, Japan.

Duterte on Wednesday explained that the China partnership does not entail full military cooperation or indeed joint energy exploration in the South China Sea, where Beijing currently holds the majority stake.

The meeting between Duterte and Xi shouldn’t center so much on the territorial disputes there, Duterte said in the run-up to Thursday’s meeting. But if the Scarborough Shoal deal is anything to go by, China has just turned a former rival into a regional ally.

Never expected Duterte could make such actions that could lead to separation from USA both militarily and economically. I’m afraid the next 5 years in Philippines will be economic hardship.

the US and their supporters are claiming the philippines economy will suffer without US aid. that their econmy will suffer. that’s not true. you have to check the number of US aid. it’s absolutely not much. and the economy? the philippines economy suffered because it joined the US against china. they were having much more trading with china than the US. look how far the US is away. as the philippines don’t have a proper industry they won’t have much trade with the US. so it’s good for the economy because now they can start to trade again with china the biggest market in that region. with a limited crime and corruption rate, the philippines will be able to have a steady stable growth. this is absolute important to have a sovergin government and that’s why the US didn’t like dutere’s domestic policies.

The Philippines tying their economy to the next major world economies, i doubt it. The USadmin will make it very difficult for the Philippines and its people. Expect car bombings and Soros sponsored violent protests.

It was bush who said ‘you are with us or you are against us’. There’s no middle ground for the USadmin and creating innocent victims is a specialty of theirs.

Good thing for President Duterte he went to China. He will then go on a state visit to Tokyo before proceeding to Moscow to meet with Putin.

Ditching the US has become possible now because there is an alternative camp now, which is btw on an upward trajectory.

Yeah, economic hardship, yup, just take an peekabooo on the epic Ballad of the sinking Douche bank. Hehe And the Imperial banana republic, is sinking as we speak, an empire dont go of like an fart in the wind, it takes time for an whale to hit bottom, but then its dead, now its just an deteriorating corps, where parasites sucks the last drop of blood from the poor bastards whom didnt know jack shit.

Of course, nothing of worth comes easy, and only persistence and forbearing, and discipline, will show, how determine the Philippines are for their own future as an independent land, with an independent people. I like that. I have even worked with some, nice chaps all of them.

And the love to fish. Hehe

And of course, the Impiss in the district of criminals on the Potomac river in the imperial banana republic Yankeestan where the ClinTards rule, something will come, and they play dirty. Never believe anything, the Yankeestans arent your friend they dont care, period, never have, and never will, until You have leveled the fields.

Because of arrogance, over indulgence and exceptionism, the USadmins have lost an empire in record time. It took the English a couple of hundred years to do the same. US forces are now despised the world over after little more than sixty years.

When the USadmin lose their bases abroad, they will find that waging future war from their own back yard will be a lot more difficult. Less US/nato bases abroad will mean less friction and in a war situation they won’t be drawing fire away from the main antagonists and their command centers. Hosting a US/nato base is like painting a target on your back and strapping a doormat around your waste.