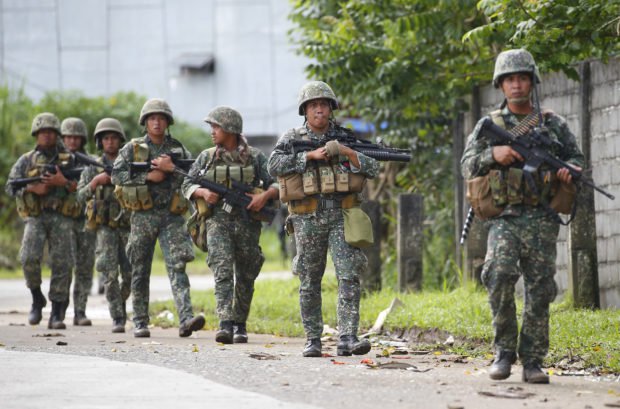 On August 15, spokesperson for the Armed Forces of the Philippines (AFP) Brigadier General Restituto Padilla Jr. announced that only 40 ISIS fighters are still alive in Marawi city.

“Based on the ground commander’s estimate, their number has decreased to less than 40. So maybe their forces have been reduced to between 20 and 40. The force is getting smaller,” he said. “Their capacity to inflict harm, by the way, is still there because they still have arms, they still have adequate ammunition and they still continue to hold hostages. So that’s the compounding factor.”

“All our personnel, all our soldiers or marines on the ground are there, they all accounted for, we do not doubt any of their loyalties, in fact, many of those who gave up their lives in Marawi from day one up to present and still fighting.”

Padilla statement came after the Director General of the Philippine National Police Ronald dela Rosa reveled that some police personals are being investigated for suspicions of colluding with ISIS.

According to Philippian sources the AFP lost 128 soldiers in the Marawi battle while 562 ISIS were killed.

If these numbers are true, than Daesh lost more than 3 to 1 men, while being in a defensive position. That isn’t very impressive by Daesh.

But lets not forget, that every soldier or civilian life lost is one too much.

Well, CIA is scraping the bottom of the barrel for recruits these days.

That about sums it all up! CIA = ISIS = DAESH = all Terrorist Groups

many of those (soldiers) who gave up their lives in Marawi are still fighting.” No wonder the kill ratio is so high if the ( unfortunately) dead soldiers are still fighting. Bit like the Night Walkers and their army of the dead in Game of Thrones. Seriously though despite the heavy loss of life it maybe better this group is decimated here than going on killing for years too come at perhaps a much higher loss of life too civilians and soldiers in the jungle.

This should have been a one day job if it is only 40 left. It is rather pathetic. Send in your army and crush them.

Perhaps you need to go and show them how it is done. They obviously need your expertise. Don’t become a statistic and take lots of toilet paper.

Maybe what he meant to say was “Brigadier General Padilla agreed that the US soldiers were supporting ISIS.”

Do a cleanup of the army and the police or you will get the same problems again.