If you have read a recent New York Times op-ed entitled “Care about Gaza? Blame Hamas” written by none other than the White House “special representative for international negotiations” Jason Greenblatt you would understand that the misery being experienced by Palestinians in Gaza is all their own fault. Greenblatt, who is Jewish of the Orthodox persuasion, just happens to be a strong supporter of Israel’s settlements, which he claims are “not an obstacle to peace.” He is very upset because some naysayers are actually putting some of the blame for the human catastrophe in Gaza on Israel, which we Americans all know is our best friend in the whole world and our most loyal ally. If that were not so, the New York Times and those fine people in Congress and the White House would surely inform us otherwise. And anyway, what are a few lies and war crimes between friends? 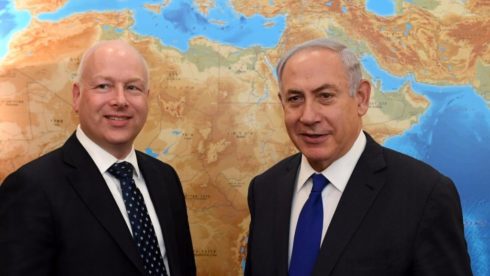 Greenblatt, who knows nothing about foreign policy and diplomacy apart from advising Donald Trump on Israel while serving as the Trump Organization chief legal officer, is supposed to be working hard with Trump son-in-law Jared Kushner negotiating “deal of the century” peace between Israel and the Palestinians. Betting is that the arrangement on offer in June will consist of American acquiescence in Israel declaring sovereignty over nearly all of land that the Arabs still hold on the West Bank with the remaining local population being bribed heavily to either move to Jordan or stay in designated non-Jewish sectors and stop complaining.

Jason Greenblatt is a perfect example of the type of “dual” loyalist who cannot appreciate that his overriding religious and ethnic allegiances are incompatible with genuine loyalty to the United States. Willingness to subordinate actual American interests to a those of a foreign nation means that he and others like him are contributing to the decline and fall of the country he was born in and which has made him wealthy. If he had any real integrity, when presented by Trump with the opportunity to benefit Israel at the expense of the United States he should have declined the offer knowing that he would inevitably be biased, making it impossible for him to fairly consider either American interests or those of the Palestinians.

Greenblatt knows that whatever lies he tells it will not matter in the least because no one will ever hold him accountable and it is all done for a great cause, which is Israel, to include anything that Prime Minister Benjamin Netanyahu wants. And what could be better than to hold down a job that pays in the neighborhood of $200,000 a year plus a full benefits package for doing nothing but “creating facts on the ground” for the country that one loves best?

The Greenblatt op-ed includes some really choice “analysis” that does not correspond with the reality of what is going on in what remains of Palestine. He begins immediately with a heavy dose of Israeli propaganda, asserting that “Hamas has left Gaza in shambles,” before providing a partially accurate but morally neutral assessment of the sorry state of the enclave: “Life there is difficult, sad and abnormal. Only buildings with generators actually maintain steady power. The lack of power affects everything from preserving fresh food to treating sewage. If a person in Gaza falls ill, he is likely to find trained medical professionals unable to help because of the lack of equipment and medicines. The people there — even the talented and educated — can’t find jobs. The store shelves are empty. The shoreline, which in many other places in the Mediterranean would be filled with beach resorts, is covered in the raw sewage and debris from successive wars. The cost of conflict is seen in all aspects of life in Gaza.”

The dismal picture of conditions in Gaza, largely true, does not admit to any Israeli role in the suffering, or, at least, Greenblatt is blind to it. Israel controls both the land border and the seafront. It manages the enclave as if it were an outdoor concentration camp and military free-fire zone for its 2 million Arab inhabitants. Lack of power is caused by Israeli bombing of power plants, which also make it impossible to treat sewage. Proliferating sewage appears to be a preferred weapon for Israelis as settlers on the West Bank are also fond of letting it flow onto Palestinians farms and villages.

Food in Gaza is limited only to what can be grown locally or to what the Israelis allow in. Likewise medicines are only available when Israel permits. Gazans cannot leave without Israeli permission and on the seafront, fisherman who are brave enough to go out are frequently shot dead by Israeli gunboats if they go too far.

Israel bombs hospitals, schools and places of worship indiscriminately, always claiming that they are being used by terrorists even when United Nations observers are on site and declare that the allegations are palpably untrue. And then there are isolated incidents , to include the deliberate murder by naval gunfire of four young boys innocently playing soccer on a beach and the killing by missiles of nine other children who were watching television. An American military attache stationed in Israel once observer soldiers on the Israel side engaging in target practice by shooting at women hanging out their laundry on the Gaza side of the fence and Israeli snipers have proudly worn t-shirts showing a graphic of a pregnant Arab woman in a gunsight with the text “two for one” underneath.

Currently, protests by unarmed Gazans along the Israel-Gaza fence have resulted in 260 Palestinian deaths, mostly by Israeli sniper fire. Nearly 7,000 others have been shot and wounded. Those killed include 32 medical workers and 50 children. Twenty-one children have had their limbs amputated and many more have been permanently disabled.

Thousands more Palestinians have died from Israeli bombs, rockets and artillery shelling since 2009. In 2014 alone, more than 2,000 Gazans were killed and more than 10,000 were wounded, including 3,374 children, of whom over 1,000 were left permanently disabled. More than 7,000 homes were destroyed. The grossly disproportionate carnage in Gaza initiated by Israel was so outrageous that even many Americans began to wake up to what their tax dollars were buying. After 2014’s death toll, support for Israel began to wane. Currently 51% of Americans view the Israeli government unfavorably in spite of relentless pro-Israel propaganda by the U.S. media.

Jason Greenblatt goes on to claim that “The Arabs in Israel generally live normal lives and, in many cases, thrive. In fact, Arab citizens of Israel live freely compared with Arabs in many other countries in the region… Why are others moving forward while Gaza sinks further into despair and disrepair? Because Hamas, the de facto ruler of the Gaza Strip, has made choices… Hamas is to blame for Gaza’s situation.”

Greenblatt is wrong about the claimed happy lot of Palestinians living in Israel. Israel has recently declared itself a Jewish State. In practice, there are more than fifty laws and regulations that make Christians and Muslims second class citizens. Churches and Mosques are regularly vandalized and Christian and Muslim holy sites are regularly destroyed by the authorities while a prominent Rabbi has recently declared in the wake of Sri Lanka that proposals that all churches should be destroyed inside Israel should be considered but are “complicated.” Arab Israelis cannot get building permits, their schools are underfunded and they are discriminated against or ignored in nearly all their interactions with the government. Local communities can declare themselves Arab-free zones and they can refuse to sell houses to Palestinians.

The fundamental problem with Greenblatt and others like him is that they have a very selective moral compass and choose not to recognize apartheid even when it is right in front of them. Israel is a fundamentally racist occupying power with a colonial-settler mindset, which sees the Arabs as ignorant savages that have to be ideally removed, but if not, restrained by forced or even killed if necessary. And, like all purveyors of war crimes, the Israelis and their diaspora cheerleaders blame the victims for their plight. Greenblatt will have an excuse for any atrocity committed by Israel. The Israel Defense Force is shooting Palestinians individually now but if it starts doing them in groups he would no doubt come up with a good rationalization justifying the practice.

Israel is a Middle Eastern superpower, heavily armed and unconcerned over the consequences for starting wars and killing Arabs. To argue as Greenblatt does that there is some kind of “fighting” going on with Hamas “instigating” wars against Israel is ludicrous given the disparity in power between the two sides. It is largely retaliatory Hamas homemade bottle rockets, which kill or injure very few, against fighter jets, snipers and artillery barrages that kill thousands. And the really sad part for Americans is that the United States is deeply complicit in what goes on, sending “special representatives” like Greenblatt into the region on the taxpayer’s dime to argue Israel’s case.

Philip M. Giraldi, Ph.D., is Executive Director of the Council for the National Interest, a 501(c)3 tax deductible educational foundation that seeks a more interests-based U.S. foreign policy in the Middle East. Website is councilforthenationalinterest.org, address is P.O. Box 2157, Purcellville VA 20134 and its email is inform@cnionline.org.

I only support Gazans and not westbankers.

“the Israelis and their diaspora cheerleaders blame the victims for their plight.”

Ben Gurion: But Jews are coming to Palestine because it is our country, it has been our homeland for 3,500 years … We are here on the basis of the fact that it is the country of our people; we were dispossessed by force and we did not give it up. We are coming back to our home.

But the truth is that 95% of the Jews of the world are completely of European origin with not even a trace of Middle Eastern connection. I do believe that Mr. Giraldi does not like the idea the European Jews could be originating from the same place that he does.

It is hard to believe that what I’m quoting below were written by the same person – Mr. Philip Girardi. He makes it very clear in his writings that his primary concern are not the Palestinians. His main concern is that Zionist entity has a negative impact on the United States, a country that he cares about. He made it very clear today that the Palestinians do not have a tiny fraction of the weapons the Zionist entity has and yet in the past he said that the entity had the right to defend itself. What when one is defending himself, it means that he’s not the aggressor.

Some might regard what Israel does as the heart of the problem, which in a sense it is, but if one is concerned about American interests how Tel Aviv behaves when it is not directly doing damage to Washington is certainly a secondary concern.

Tel Aviv chooses to do certain things to “defend” itself from its neighbors so be it. But Israel has to grow up and take responsibility for its own actions without an American deus ex machina to fix things, write checks and bail it out politically every time it screws up.

Israel is nothing but trouble. It has the right to defend itself and protect its interests but that should not involve the United States.

And the really sad part for Americans is that the United States is deeply complicit in what goes on, sending “special representatives” like Greenblatt into the region on the taxpayer’s dime to argue Israel’s

Israel is a fundamentally racist occupying power with a colonial-settler mindset, which sees the Arabs as ignorant savages